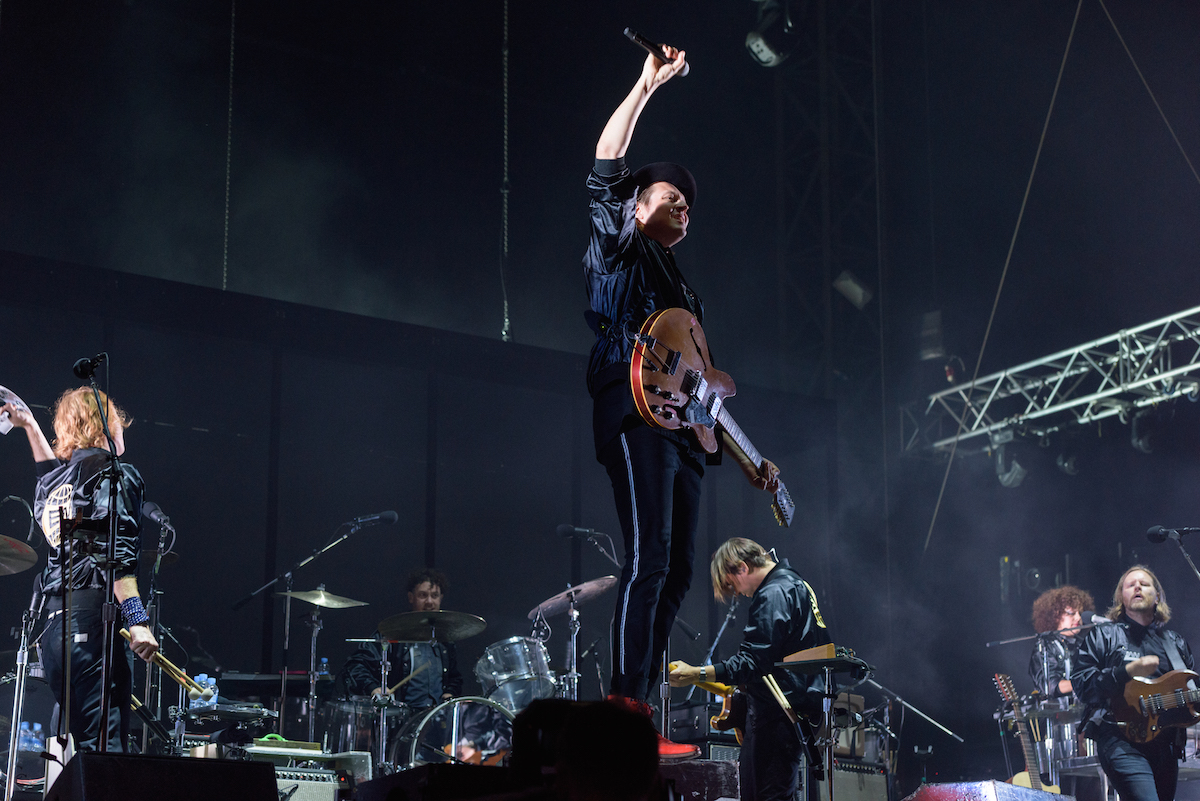 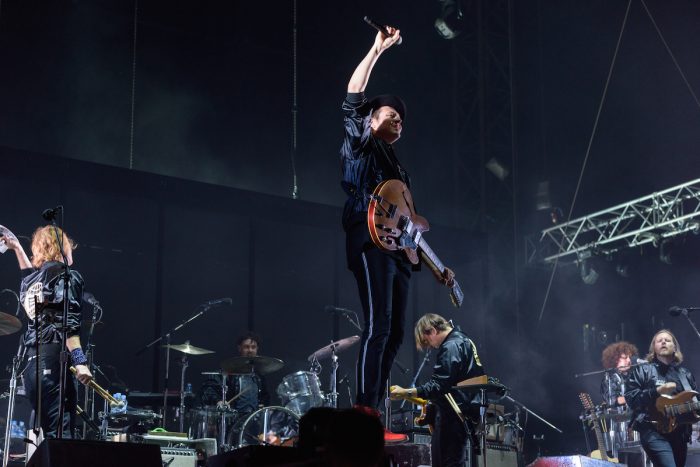 A mesmeric performance from Arcade Fire in Manchester as they show why they are deservedly one of the biggest bands in the world. David Edwards reports for Louder Than War.

As Arcade Fire return to the stage for their second and final encore tonight, Win Butler implores the crowd to hold up their smartphones so that the collective light from their flashes illuminates the whole of the Castlefield Bowl like hundreds of glittering diamonds peeking through the gathering dark. As the delicate strummed chords of Neon Bible reverberate around, Win suddenly begins to sing Joy Division’s Love Will Tear Us Apart and is immediately joined by every heart and voice singing back. Looking around, it is almost unbearably moving and poignant – especially given the events at the Manchester Arena barely 50 days earlier – but also a reminder of the power of music to unite us together and Arcade Fire’s unique ability to lasso a heart with their emotive magic.

Before this moment arrives, what transpires here is two hours of muscular glory; one of the finest gigs to grace Manchester in many years. Arcade Fire’s status as a great live band has never been in question since their incendiary early dates in support of Funeral, but their metamorphosis into one of the biggest bands in the world has correlated with the ability to transfer the fragile intimacy of their early records into something that fills the largest stadiums. Confined here within the small capacity of the Castlefield Bowl tonight, the effect is mesmeric.

One of the most striking things tonight is the crowd response to the new songs from their unreleased and upcoming album Everything Now. The title track of that record opens proceedings tonight – shimmering ABBA-esque disco grooves of silver and words of nagging poignancy. Signs Of Life marries a shuffled house groove to foreboding tomes and ‘Creature Comfort’ simply dazzles – heavy electronic pulses ringing around our ears as stabs of colour emerge from every side. I do not think I have ever heard unreleased songs greeted with such rapture before in twenty years of gig-going and while much of this is obviously due to the staggered internet campaign, it also acutely reflects the fact that, going into their fifth album, Arcade Fire have never sounded so confident, focused and utterly clear in their vision.

The set soars by without a moment of filler, compromise or pause. It has now reached the point where the band can delve back into their catalogue to ensure a continued flow and stream of quality. Tunnels and Rebellion (Lies) grow wings and soar beyond their embryonic days on Funeral. No Cars Go is a true anthem: sung back, fists raised, by every single person there. Sprawl II (Mountains Beyond Mountains) has never sounded better – Regine’s voice pin-perfect – and Reflektor and Afterlife shimmering with echoes of the cities’ dance heritage (indeed, it hardly seems surprising when the latter morphs into a version of New Order’s Temptation during its closing stages. The band look utterly thrilled to be there, and almost taken aback by the incredible response. Win Butler has now become a true frontman – climbing up on the monitors, shaking hands on the front row, utterly confident. It is so far removed from the almost painfully shy, occasionally apologetic frontman of the early years, but this is so reflective of the transformation of this band from shy indie outsiders to genuine superstars. The energy and the connection between band and crowd is the same as the individual members swapping instruments and vocals: symbiotic, fluid, effortless. It is a remarkable thing to witness.

And in this new guise as champions rather than outsiders, we embrace our heroes. For those like me, who found themselves endlessly pouring over the cryptic lyrics to Funeral back in 2004, this scarcely seemed believable – let alone plausible – that this band could reach this level of critical and commercial acclaim. But it has happened – Arcade Fire have succeeded on the back of sheer determination, drive and a consistency of songwriting and live performance that is the equal of any band from the last quarter of a century.

As Win Butler thanks us for “not being scared and for being an inspiration to the world”, you finally see the tears come streaming from the faces of those around us. As a city, Manchester has responded to the horrors of 22 May with bravery and compassion, and tonight we find mutual solace and joy in this most strange, beguiling and beautiful of bands. A quite astonishing night, a truly remarkable band and a concert that will live long in the hearts and minds of everyone who was privileged to be here. Simply put – Arcade Fire are one of the greatest bands of our generation. And one that we should truly treasure.

All words by David Edwards. This is his first piece for Louder Than War.