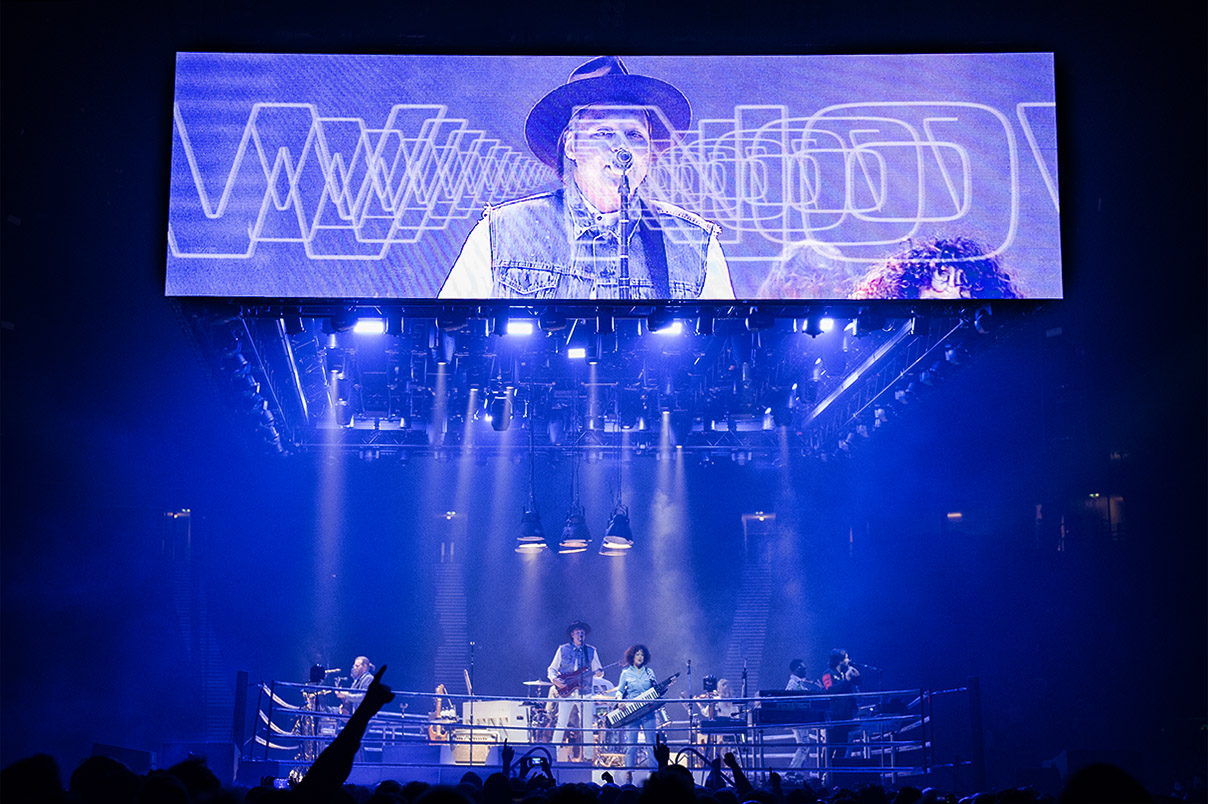 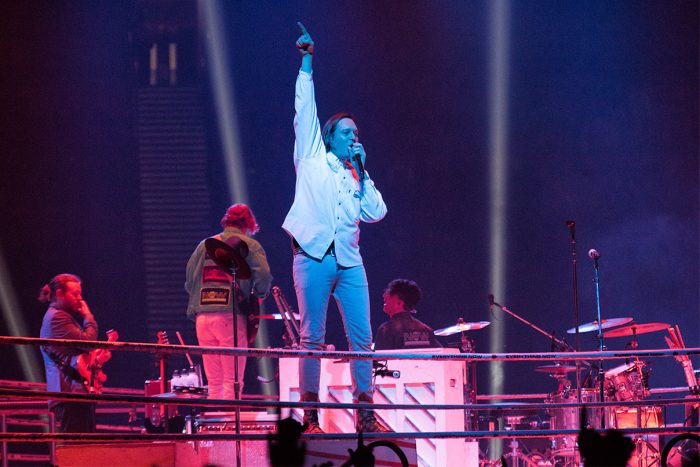 Whenever there is a big fight, there is hype; hype beyond belief. Arcade Fire’s latest tour in support of 2017’s Everything Now album is a show mocked up like a boxing match, but does it live up to the hype?

Prior to Arcade Fire making their ring walk for the heavyweight bout, The Preservation Hall Jazz Band used their position on the card to warm up the crowd by serenading the crowd with their toe-tapping, feel good jazz that brought the spirit of Bourbon Street to the Arena.

Music on the undercard was infused with groove; The Salsoul Orchestra, Bill Withers, The Waves, ABBA and the bands entrance music from Walter Murphy (A Fifth of Beethoven) all formed a part of the ever increasing atmosphere as adverts were played on the bands screens. The cosmic ring announcer continually hyped up the crowd although according to the faceless space face he was not legally allowed to ask if the crowd was ready to rumble! 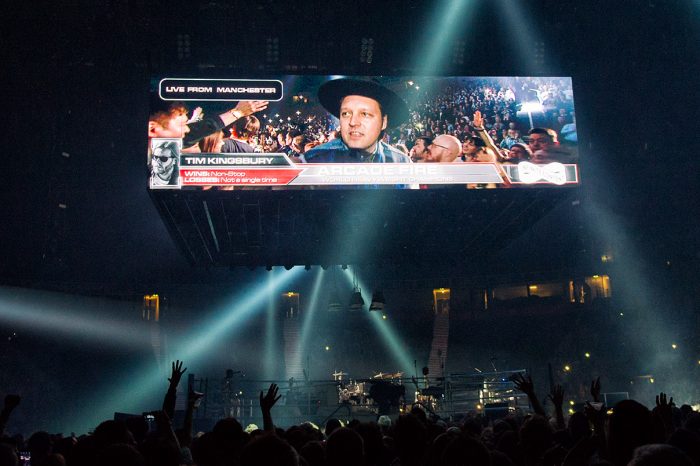 As the band made their trip to the ring through the fervent Manchester crowd, the flickering white light helped enhance the tension in the arena. The opening was high octane and oozed masses of energy from the Montreal collective. Everything Now, Rebellion (Lies) and Here Comes The Night Time all bled into one as the opening felt like a ‘movement’ before the band stopped briefly between a song to make the first of numerous instrument changes that were made throughout the night. 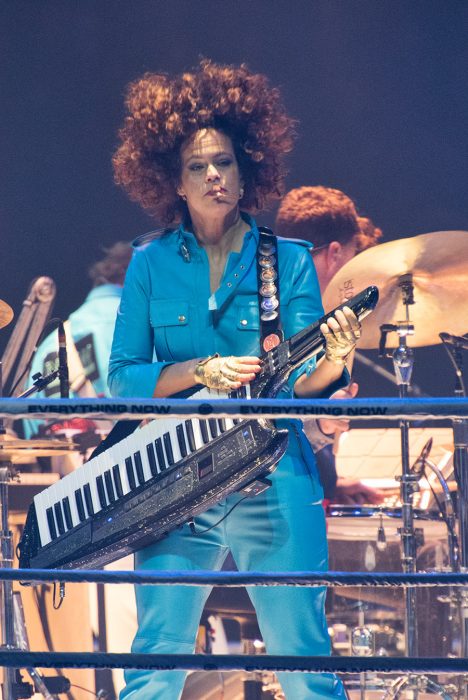 Over the course of the two hour set, the band moved seamlessly from a range of guitars, percussion, woodwind and brass; it goes without saying that the bands road crew must be one of the most highly skilled and hardworking in the business. The show was flawlessly produced and well-crafted mix of old and new songs were greeted with ardent enthusiasm alike; this crowd weren’t just waiting for one particular song or a bunch of hits.

The setup in the round with the boxing ring style was perfect for a band that has grown immeasurably into the role as complete crowd pleasers. Win Butler is the perfect ringmaster; he baited the crowd into always being involved with the band, along with his wife and band mate Régine Chassagne. The passion and energy in this band is unrivalled.

No Cars Go and its wonderful string laden hook had the crowd singing along as they punctuated the sound with the elated cries of the song. From the indie rock of No Cars Go, Electric Blue showed the more twisted disco side of the band Chassagne took lead vocals among some trippy visuals serenading the audience. The pre-show disco songs were not played out of spontaneity; another new cut in Put Your Money On Me has more than a whiff of ABBA in its hypnotic and catchy chorus. The disco thread throughout the evening was perfectly pitched.

Again, the mix of old and new was superbly blended as Keep The Car Running, a rapturous rendition of Neighbourhood #1 (Tunnels) and Vampires / Forest Fires from their debut EP (live for the first time in 7 years) saw the pace slowed a little. Suburban War was pre-emptied with instructions to light up your mobile phones. It feels like a modern day arena cliché but it doesn’t half look impressive when people get involved!

Another thing that almost feels cliché at times is that most bands struggle to leave politics at the door in 2018; Arcade Fire was no exception. A mention of the horrid nature of Donald Trump and Brexit was mentioned before Keep The Car Running, and The Suburbs title track was dedicated to the Florida shooting victims from earlier this year in the United States.

With The Suburbs, the band played a suite of songs from that album which included Ready To Start and the magnificent Sprawl II (Mountains Beyond Mountains). The electric dream pop drawl of the latter proved the perfect segue to the next brace of songs from 2013’s electronically charged, James Murphy (LCD Soundsytem) produced, David Bowie featuring Reflektor. Régine Chassagne took the gig to the floor and decided to go and have a dance under one of the two huge mirror balls in the arena. Win Butler also took the party to the crowd venturing up into the lower tier during Afterlife.

Creature Comfort is possibly the bands most electronically orthodox tunes from Everything Now; the pulsing electro beat and choral chorus is another masterstroke from the band in making glorious pop music. During the Talking Heads/New Order influenced song, the whole band encouraged the audience in swaying their arms as the most almighty amount of dried ice swamped the arena to compliment the burning visuals on the screens. If you were on the floor on the wrong side of the stage, I imagine visibility was extremely poor! 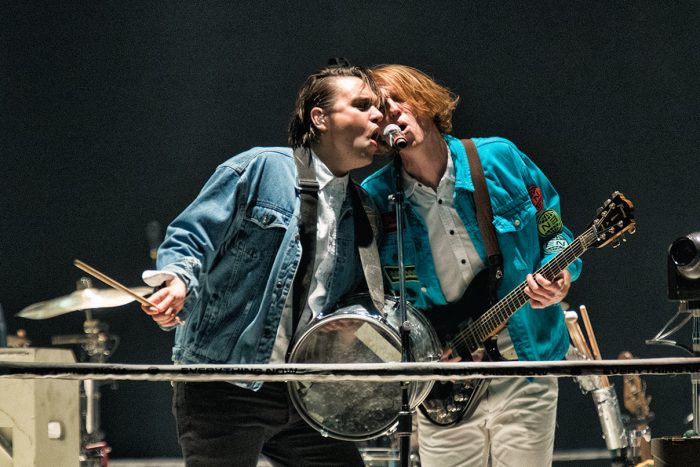 Amongst the heavy smoke, Neighbourhood #3 (Power Out) erupted and closed out the main set as the light show again dazzled with lights engulfing the whole arena and looking spectacular amongst the mist. A little snippet of I Give You Power (the bands collaboration with Mavis Staples) was perfectly inserted into the song.

How the band managed to get off stage without tripping up over all their kit amongst the smoke was beyond me, but they returned for an encore that included We Don’t Deserve Love which again saw Win Butler out in crowd singing the words from the screen, karaoke style.

Whilst people weren’t seemingly waiting for a particular hit or song, it is impossible not to think of Wake Up when talking of Arcade Fire. The band duly obliged in giving the Manchester crowd a monstrous rendition of the song with the Preservation Hall Jazz Band in accompaniment to close the night. Both bands left the stage as they entered; through the crowd to the exultant vocal refrain of Wake Up in ragtime fashion before seguing into Stand By Me as the house lights came up over the crowd.

Arcade Fire are a band for the ages. In years to come they will be amongst a handful of bands that will be looked back on and revered for their diversity in output, stunning live shows, and all round excellence. Believe the hype. Go see them on this tour; it is a mesmerising show that is stunning, soulful and ultimately uplifting.

Words by Dominic Walsh. You can read more from Dominic at his author’s archive here. Dominic also tweets as @dtwalsh83