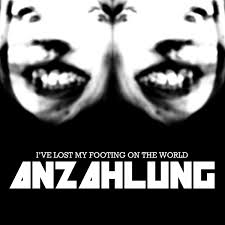 I’ve Lost My Footing In The World

Debut album by Anzahlung, a spin-off from the mighty Cravats featuring The Shend and Joe 91. Offering a very different taste to their parent band, their sound is, in their own words, bleak beats, dystopian disco and succubus swing….Ian Canty holds on to the banister as Saturday Night Fever turns into a Surreal Tuesday Afternoon…

Anzahlung come to us from the minds of The Shend and bassist Joe 91 of The Cravats. But they are of a very different brew indeed. Across the 10 tracks that make up I’ve Lost My Footing In The World, their debut album, they set out some savage “cold wave” style dance grooves that are bestowed the kind of bizarre lyrical/vocal twists that only The Shend can provide.

Bolt Through My Bones’s pulverising beat marches the listener straight into I’ve Lost My Footing In The World. A genuine electronica thump around the noggin, it is enhanced by The Shend gruffly holding forth darkly with unsettling whisper sounds underneath. It’s clear from the off that Anzahlung specialise in a very catchy brand of eeriness and a dancefloor ready one to boot.

With an insistent keyboard riff over a sparky rhythm, Standing Still is crisp and arresting. The song taps into the static, empty nature of modern life, as evidenced by “tell your friends you’re making progress, but you’re not and you’re a liar”. The frosty synths and shining electropop pulse might bring one to speculate that this is near to what might emerge if John Foxx’s New European dreams were crossbred with the spookier tales of Edgar Lustgarten. But you can be sure it is all Anzahlung’s own original preparation and a blinding piece of thoroughly modern pop music it is too.

The sinister electronic shifts and quickfire stamping eletcro-drums of You’re My Friend follow. Here the vocal refrain plays dumb with the chant “You’re my friend and I like you” and the frantic tempo provides a framework for the tune to single-mindedly motor along. Fist In Fist slows things a touch, being more mid-paced with bells and ghostly echoing vocals floating above, before a dance beat eventually kicks in. An austere, hypnotic atmosphere dominates and the song presents a number of quixotic images like “I’ll give you your wife back if you can tell me how many pairs there are in a pear tree”.

We then come to Busy Always Ends In Why. It begins with shuffling percussion that leads onto a lively tune with blasts of guitar noise. Busy… is perhaps the closest this LP comes to the sound of The Cravats, without seeming out of place in Anzahlung world. This number proceeds along nicely, less of a dance rhythm here, but nonetheless good stuff.

The title track I’ve Lost My Footing In The World begins side two of the vinyl LP. Another offering where a brutal percussive attack gives way to electro moves, as The Shend hovers malevolently above with a song that’s thrust is a nightmarish vision of being replaced by a doppelganger. A claustrophobic but compulsive item, with genuinely tough beats. The repeated sample “Drop dead. I was here first, dope” cuts this number in half, but it comes roaring back in for the finale.

Head Of Hoses starts with clicks and out of tune keys, plus bizarre vocal interjections. I suppose you could compare the sound evoked here to Devo, but definitely a UK version, with The Shend’s spoken vocal telling us surreally to go “through the denture” and of “mad mopeds”. Some attractive chimes and a great line jumps out “And is trying to sell Ultravox a bunch of sour grapes from the future”, at which point it suddenly ends.

Pounding drum and samples open up This Is Not A Test and another spoken vocal built around a mantra that commences with “I have no idea. I guess he is stuck in traffic”. The static drum bangs relentlessly onwards whilst electronic whirls go ever faster, before dropping out to let the vocal in. A neatly constructed piece, there is certainly method to Anzahlung’s madness.

This Is The End Of The Time Of My Life’s machine clanks and sparks bring the listener into a robotic world, but with a nailed-on house beat. Here The Shend near croons in from a distance, until the menacing, growled song title. All that is left is the brief The First Few Moments, where odd echoes swoop in, with a 50s US gameshow organ and some interview tips also with an American voice emerge. They are then roughly merged into a spooky sound with those echo noises back and then quickly cut out, which curtails the LP.

Anzahlung fit in with The Cravats as another mutant strain from DCL (Dada Cravat Laboratories), like The Babymen and The Very Things before them. I’ve Lost My Footing In The World is riddled with intrigue, tense atmospheres and strangeness, but also with grimy humour and beats that can hold their own on the modern dancefloor included too. Being equal parts danceable and dark, it all works perfectly – Anzahlung are obviously painstaking in their presentation of their music and the work put into weld the twisted tales to the electro-musical landscape pays off big time. Yes, as they say themselves, there are bleak beats and you could call it dystopian disco certainly. Myself though, I would just say this is a fine album that reaches locales that other dark disco fears to venture to.