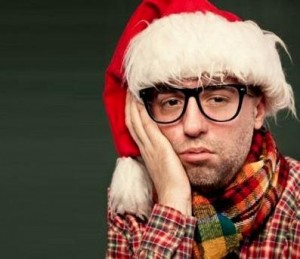 So how are you feeling? Better now?

No more gaily coloured tinsel hanging limply from the tired looking tree in the corner that’s been dragged out of the loft kicking and screaming every year since 1982. No more songs by Slade, Shakin’ Stevens, Band Aid, Band Aid 2, Band Aid 20 and bloody Cliff Richard. Sod the mistletoe just give me the wine! No more bloated lunches with family and friends, most of whom you never see throughout the year but are invited because family is family, whatever that means!

With you in your comedy Christmas jumper that dear Aunt Penelope thinks is “fun”, chewing on the carcass of a tired old bird (no not Aunt Penelope again) with a mountain of potatoes, parsnips, carrots and lots of other vegetables that you can’t even remember because you’ve had a few glasses of the awful cheap plonk that Uncle Nigel bought you “cause it’s what they serve in Prezzo and you know how much your Aunt and I love Prezzo, it’s so Italian don’t you think?”. No it isn’t, unless of course Italy smells of detergent and tastes of the anti-freeze that you put in the car last night.

Christmas is the scene of your worst nightmare. You’re hip, you’re cool, you’re on trend. Outside of the two up two down in some Surrey backwater town where you now find yourself incarcerated for the next 48 hours, you’re someone. You eat at Byron, Hawksmoor and The Ivy, your suits are from Savile Row, your shirts from Emma Willis, your shoes from Oliver Sweeney. Even now, you can feel the bile rise as Aunt Penelope’s scraggy mutt Archie dares to lick the toe of the Tamponata Calf Leather Purple Wholecut Oxford shoes that cost you nigh on three hundred pounds and are the envy of every suit in Tower One.

Outside of that special day you wouldn’t be seen dead in that jumper because yours are from John Smedley, you’ve never set foot in a Prezzo in your life because the fellas on the 35th floor would just laugh at you. Well, you’ll make them laugh when you tell them how you dumped that poor and boring little blonde piece you picked up in Soho a month back. A teacher from Lewisham? Too dull and boring for you. Oh, how she cried when you dropped her at The Shard the other night in the middle of another of her anxiety attacks that were too much for you to bear. So you left her on the viewing platform and went to a party at the Gaucho…so much more fun.

And now as you lie half choking on the shag pile carpet feeling the anxiety and irony of it all coursing through your veins you hear the last words that came from her sad pink mouth as you strode arrogantly towards the escalators and feel them burn slowly in your dark bloated heart, “over anxiety ultimately banishes every trace of joy from life…”

Alright hands up…who feels anxious? Given the time of year that’s just passed you’d be entitled to. Take yourself back a few weeks and just think about it for a moment. Stop wrapping that awkwardly shaped present, put down the well thumbed hard back book by Nigella, turn off the seemingly never ending Christmas play-list that’s threatening to vibrate its merry way to your core and switch off the coloured fairy lights that have now begun to blink ominously in front of your eyes like the brake lights on the BMW that cut you up on your way back from last minute Christmas shopping in the gigantic shopping centre crammed full of hundreds of other tinsled, tousled, toy hunting tourists just like you.

Imagine, if you will, that you’re somewhere other than where you are now. Try Dalston. Yes I realise that’s not your first choice. Not especially glamorous and there is rather a lot of facial hair on view, but it’s hip, it’s happening and you’re cool, upwardly mobile and down with the kids, right?

It’s wet outside but in here it’s warm, it’s dry and there’s not the slightest hint of Christmas. In fact the surroundings of Café Oto are as on trend as they come with biscuits in jars, craft beers and a Persian-esque lunch on offer. It’s a welcome departure from the madness being played out in Westfield sponsored yuletide hotspots from Stratford to Shepherds Bush. Don’t even think about Oxford Street, just don’t!

So what do you do now that you find yourself outside of your mulled spiced comfort zone? Step up to the bar, get a drink, brace yourself, then turn around and take in the room that lies in wait before you…

Welcome to Anxious Xmas – a sneaky look inside the present bag of the Anxiety Arts Festival London 2014. Curated by the Mental Health Foundation, the festival seeks to explore the issue of Anxiety through its relationship with Visual Art, Film, Music and Performance. Call it a sampler or even a taster, tonight’s snapshot in East London is an intriguing insight into what to expect in June 2014.

On entering the venue you’re invited to write down your anxieties, pop them in a paper bag and then the performers skilfully (sic) weave them into the performances.

As Festival Director Errol Francis explains, “the festival aims to explore anxiety as a lived experience that affects a large number of people and as an inspirational force in Modern and Contemporary Art. It’s a way of encouraging greater openness about mental health issues by engaging the public with an exciting Arts programme exploring anxiety from many points of view.”

Tonight’s line up is as hip and out there as you could desire. Featuring improvisation from vocalists Blanca Regina and Sharon Gal, ambient cello from Gregor Riddell and Rob Lewis, a sound collage from The Conspirators of Pleasure plus Tuvan throat singing and Medieval tones from Mundus Inversus. There’s also a collective improvisation rite, where objects carrying festive associations are relieved of their symbolic meanings and treated instead as materials to make joyful noise.

For Regina & Gal read discordant, abstract and ambient. Snatches of sound and voice over piano. Is it giving free reign to emotions, exploring the child-like approach and qualities to sound and music or do they just need to get out more? At which point does it become an expression of art – after the need to be exponential and experimental or is it just for the sake of it?

There are melodies seeking to break through but they are twisted and stretched to breaking point by the eccentricities of both performers. Can you connect with this approach and performance dynamic? It’s tough but try – remember it’s cold outside your comfort zone and you need something to hold on to. Listen to the tinkling bells and allow yourself to go on a sonic journey.

Perhaps this it what it was like for Kerouac, Cassady & Ginsberg as they pushed the limits of their art and filled their benzedrine and caffeine-addled senses with words of poetry and prose as they twisted and turned on the road to a place where they lived in a continuous and constant stream of consciousness.

Amongst the new Beatniks tonight with their sonic soundscapes of free expression the evening reaches a climax in an ear shredding wall of incoherent noise. There’s the free expression of Miles Davis but this, well this is something else. Try listening to Bitches Brew and then rachet it up a notch or twelve. The audience feel stunned, awash with the primitive nature of it all. Is this what Anxiety feels like when instrument, voice and word are let loose in a confined space?

So, as you lie recovering in a crumpled heap on your parents bed, gazing down at the vomit spattered purple leather shoes that up until a few hours ago you cared so much about you begin to realise the futility of it all. Right now, you’d give anything to be curled up safe in the arms of that little blonde in her cute flat above the Chinese restaurant on Lewisham Way. But to her, you’re dead and don’t even exist anymore. So without care or attention you kick your shoes off onto the floor, bring your knees up slowly to your chest and as the feeling of anxiety envelopes you in the warmest but deadliest of hugs you shout through the half open door…MUM!!!!

All words by Martin Copland-Gray. More writing by Martin on Louder Than War can be found at his author’s archive.