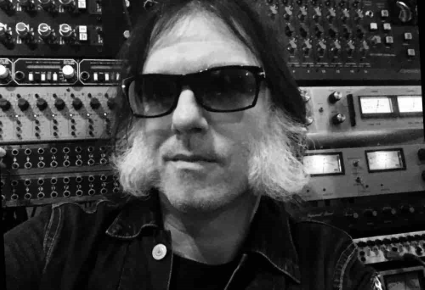 Pure Phase Ensemble are a rotating collective of musicians that come together annually in December for a week long project of collaborative songwriting and a performance as part of SpaceFest! Based in Gdansk, Poland, it is one of the hottest psych fests in Eastern Europe. Recently, this collective was led by Mark Gardener (RIDE), Laetitia Sadier (Stereolab) and Hugo Race (The Bad Seeds).

This year Anton Newcombe of The Brian Jonestown Massacre and Emil Nikolaisen of Serena Maneesh will be leading Pure Phase Ensemble. Anton and Emil will work with and guide a dynamic group of musicians drawn from Poland’s best underground groups. Their collective efforts will be recorded as Pure Phase Ensemble 6 and issued as an album.

Louder Than War caught up with Anton for a quick Q & A to talk about this exciting project and some other stuff.

Ioan LTW: Hi Anton. Where are you? What are you doing right now?

Anton Newcombe: I’m in berlin. To be honest, I am recording the vocal track for a kinks cover “two sisters” for mojo magazine. Thing is they didn’t ask me, they ask the liminanas and the liminanas asked me. I love a good surprise.

LTW: Tell me about Pure Phase Ensemble. How did you get involved in this exciting collaborative process?

AN: Well, at first I was asked to act some part like “Kevin Shields” in an experimental ensemble…and I replied fuck that, ask Kevin Shields… I see myself more as an idea person. I play a studio, I play like 80 instruments in as many ways as I can reinvent them because I am not a virtuoso…anyway, I pitched them that they should let me bring Emil because he truly is a master of sound on par with Kevin Shields and I would work as a team with him…floating.

LTW: You will be joined by Emil Nikolaisen of Serena Maneesh and you will be working with a group of musicians drawn from Poland’s underground groups. Is this collaborative aspect new to you? Does it fit well with you?

AN: I love to collaborate but I work very fast, I think and create very fast so the question really is do other people enjoy working with me and the answer is some yes and some no.

LTW: Other recent incarnations of PURE PHASE COLLECTIVE have included Mark Gardener (RIDE), Laetitia Sadier (Stereolab) and Hugo Race (The Bad Seeds). These are pretty big boots to fill! Are you apprehensive in any way?

AN: of what? That’s a fancy way of saying you don’t think I am on par with those people and that’s a personal opinion comparing apples and oranges…

My plan is to go there and make sure it doesn’t end up 120 minutes of wankers playing krautrock and patting each other on a job well done… together. Together, all of us will create something great… I’m not there to rehash the hundreds of releases I have in a slightly different form… I want to challenge myself and I want to contribute to polish culture by writing at least one song that is worth listening to…

LTW:  The SpaceFest! Psych festival sounds like a nice intimate festival and is apparently an ‘annual highlight’ in the city’s calendar. How are you with festivals? Do you like them or do you prefer a nice small club gig?

AN: I prefer to hear the sound bouncing off the walls and most festivals are outside and have time limits and various handicaps…I am more or less a jazz folk guy, I’m not an entertainer there to jump up and down and get you pumped…I just do as I feel…

LTW: What are you musical/cultural influences and preferences at the moment? Anything really getting your juices flowing?

AN: well, I’m recording always…the thing that keeps my juices flowing is the fact that I know one day I will be dead…I don’t want to rest on my past…I want to move forward and push push push, get better…

I don’t want to be bigger like the Stones and be worse.

LTW: You live in Germany now, is that right? Do you think that this rather tumultuous (and scary!) political and socio-economic situation spreading across Europe and America will spawn a creative and fertile time for bands and yourself? Or is it just completely too depressing to think about?

AN: There will be no creative explosion resulting from the West’s implosion. Most people are lazy shits. They are liars. They lie to themselves that everything is ok, or it will be when they make more money… when the government prints more money… whatever. I’m not going to yell at the TV news or paper… I am going to get solid spiritually in my core.

LTW:  So after this PURE PHASE ENSEMBLE project, what are your recording or other plans for BJM or anything else you are working on?

AN: I plan to work my ass off. You will see.

LTW: And live? Any touring plans or festival slots booked for 2017?

AN: I’m not allowed to speak about it until November….later.

Once a dreary but booming Soviet port, Spacefest! is now one of the annual highlights in Gdansk, Poland’s annual calendar. Every December it brings light and psychedelic joy to thousands of festival-goers, not to mention one of the most intimate among psych fests in Europe. As well as Pure Phase Ensemble, the festival also Includes Camera (Germany), Be Forest (Italy), The Third Sound (Iceland-Germany), DIV i DED (Czech Republic), MDME SPKR (Britain), and Polish artists Rosa Vertov, Wild Books, Lonker See, and The Fruitcakes.

Check out their website for lineup and ticket info.