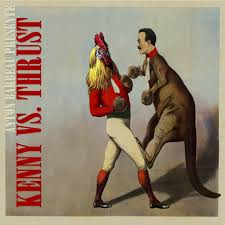 New album by Anton Barbeau, where he is backed by two separate outfits, Sacramento’s Kenny (presumably not the light pop act that backed Dennis Waterman) and Oxford’s Thrust…..Ian Canty attempts to answer the eternal question “Who would win a boxing match between a chicken with a man’s body and a man with a kangaroo torso?”……

Anton Barbeau continues his ferocious work rate with this new album, the reviews of his previous LPs Natural Causes and Berliner Grotesk are here. For this record he has used two backing bands named Kenny (not the Minder “singing the theme tune” act) and Thrust. Each of the three Kenny members are given an appropriately Captain Beefheart-style nickname, whilst Thrust are honoured with one word ephitets. These outfits currently act as Anton’s backing bands for live work in the US and UK respectively.

On the LP sleeve the bands’ separate contributions are I think denoted by either a chicken or man’s head, as per the sleeve illustration. There’s also room for one tune with Barbeau in solo guise – the track Jingle Jangle, which is as cutting lyrically as it is, erm, jangly. A 21st century version of The Searchers caught on a particularly sarky moment perhaps, perfect pop with an acid touch “Love me, hate me, but don’t penetrate me”. Elsewhere he takes songs from his own back catalogue and reworks them, the new performances are given an extra shot of vigour and expertly delivered by either band.

So how do Kenny and Thrust stack up in this musical pugilist bout? How does Barbeau marshal his troops? Well to begin with there’s no real unevenness which could have been a major concern with the changing personnel. Both bands provide plenty of arse-booting energy and craft here, with each aggregation a good fit for each song. As for the artist himself, Barbeau is often compared to Robyn Hitchcock and other sharp-witted and psych-inclined songsmiths, but on this record he reminded me most of all of the great Jonathan Richman. This was particularly evident for me on the fine and rockin’ Clean Clothes In A Dirty Bag.

But we need to put these comparisons aside as Anton is his own man with his own quirks and provides here something very much required in this day and age – a great pop album brim-full of tunes to charm the listener. Looking at the Kenny tracks first, Clean Clothes quickly lodged itself in my synapses and Land Of Economy gleams with paisley pop charm. It is adorned with a big and addictive chorus and Back To Balmain is similarly catchy with a real drive, but verges on synth pop. High quality synth pop that is.

On Tidy Up Yourself Anton seems to be demanding both corkscrew-haired pop moppet Leo Sayer and reggae legend Bunny Wailer (alongside a few other well-known names) work on their respective lives for some reason. It loads up a hoard of great daft effects upon a light reggae beat – this song is borderline bonkers but it really works, a real joy. Finally for Kenny we have Burning Burning, acoustic but driving folk pop that provides a fitting end to the album.

Moving on to the efforts that Thrust assume musical duties for, Wire From The Wall positively burns with urgency, fuzz and feedback, and has a wry lyric with AB stating that “In your head I’ll build a nest”. Over the course of this LP, Anton does just that. Wire… is immediately pleasing and though Beautiful Bacon Dream is heralded by a backwards tape intro and has some psychedelic elements, it also throbs with post punk edginess. The music here works as a neat juxtaposition to the spaced-out words, proving there is a real eye for detail in everything Anton Barbeau does.

Haunted In Fenland has a cool bass rumble and Anton here is at his most Dylan and Lou Reed-esque. The piece builds up very nicely with another great chorus hovering above some musical mayhem. A fuzzed up spacey pop song deconstruction Popsong 99 is another beaut and Mahjong Dijon ends Thrust’s collaborations with a glistening guitar line and a good hook that is instantly memorable.

I think we have to be fair and call Kenny Vs. Thrust a very entertaining score draw. The Thrust efforts tend towards the noisy and angular, whereas Kenny’s contributions are more pop and slightly more adventurous (which is saying something). But these are generalisations not absolutes – there are crossovers all along and the album hangs together well as a consistently enjoyable and inventive collection. We need Anton’s eccentric and witty take on pop all the more these rather gloomy days. Kenny Vs. Thrust is a record for people who prefer their tunes come with a little intelligence and provides real fun for those who are prepared to listen. A fine collection.