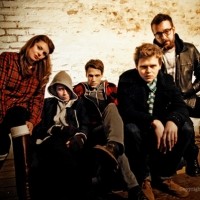 Lucy Holt had a listen to the new LP from heavy rock upstarts Antlered Man. Here’s what she thought.

Antlered Man are a multi-pronged attack on everything you thought you rock music should be like. The geographically ambiguous quartet release their debut album Giftes 1 & 2 on March 5th. [LTW has since discovered that the band is from Bermondsey, however, the original statement still stands on account of Bermondsey’s lack of culturally significant figures and Wikipedia’s 24 hour sabbatical]. It seems they’re attempting to prove it’s not against the rules to have a pet flutist in tow… along with committing other unwritten rock crimes.

The opener ”ËœOutrages 1 ta 3′ is a political tirade of numerically ordered abuse, setting the scene for a precisely constructed album full of songs that are so furious, they’re can’t quite remember what they’re fuming about. The also phonetically titled ”ËœPlatoono of Unoo’ marches into the unchartered territory of post-Suffragette irony with the refrain of “I am a man and I want to be heard”Â. Hopefully Antlered Man have their spiked tounge lodged firmly in cheek with that one.

There are anti-establishment rants, and then there’s the title track, ”ËœSurrounded By White Men’, an anti-establishment, anti-elitist, anti-trust fund rage. It starts off heading dangerously towards “emo kids covering Placebo” territory, but just about sidesteps this courtesy of a growling riff and fairly catchy chorus (and by fairly catchy, we mean skull pounding until your brain can’t help but surrender).

Apart from this sonic bullying, Antlered Man show off a little self-control and sophistication, saving vital brain cells usually destroyed in mindless head-banging for the appreciation of orchestral subtleties and other fancy bits. Take the distorted Coca-Cola jingle at the beginning of ”ËœCan’t Beat Them, Try Solvents’ or the sitar-y loop on ”ËœSchitzo Tennis’. The gentler ‘Buddhist Soup’ is an opportunity to sit down, count to ten and have a cup of tea before you lash out at the stupidity of society, which Antlered Man have nicely outlined in the chants of carefully considered rage that occupies the majority of the album. Although the vocals have hints of Interpol’s Paul Banks and it features the least threatening of the vocal utterances – the whistle – it’s raucous in comparison to your average album “slow one”.

Antlered Man are really quite good, and have offered up some perfect opportunities for “beast” analogies (to which we’ll say thanks, politely decline). They could just do with deciding what exactly they’re angry about, and whether the flute is really the best way of expressing this.