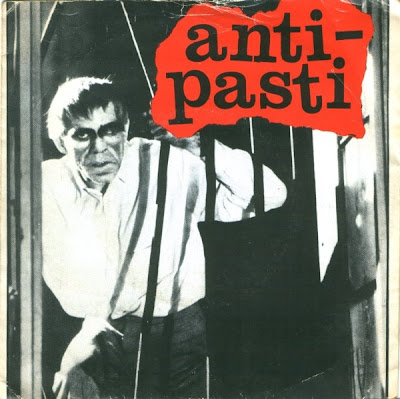 As soon as I saw this gig advertised, I knew straight away that I needed to travel down from Manchester and be there. After 17 years away, Anti-Pasti were back â€â€œ playing a warm-up gig in St. Albans ahead of their Rebellion Festival appearance in Blackpool.

I’d not seen them back in the day and always regretted it. In the early 80’s, Anti-Pasti were out there with The Exploited, Discharge, Chron Gen and others, leading the charge to prove that Punk wasn’t dead â€â€œ it had just changed.

They’d only released 2 albums (The Last Call and Caution in the Wind), but there was a rich catalogue of tracks that were powerful enough to make them my pick of that bunch.

Their return was a glorious success and wonderfully received. Martin Roper had a stage presence which belied the long years away â€â€œ his energy and enthusiasm was clear to see and hear. Right from the start, opening with â€œThe Last Callâ€Â, there was no evidence of any rust, nor of any loss in that 1980’s Punk energy and spirit â€â€œ I already knew it was going to be a special night and there was also an air of excitement and expectation throughout the crowd, some of whom weren’t even born when â€œThe Last Callâ€Â was released.

Past fan – favourites like â€œAnother Dead Soldierâ€Â, â€œLet Them Freeâ€Â (dedicated to all â€œPasti-Headsâ€Â in the crowd) and â€œSix Gunsâ€Â were delivered which real passion and they even managed to throw in a couple of new tracks for good measure (â€œI See Redâ€Â and â€œVive Cheâ€Â).

The best were saved \’til last though â€â€œ â€œNight of the Warcryâ€Â and the classic â€œNo Governmentâ€Â turned the dancing Punks down the front into a frenzy of delight, ahead of two encores which saw another rendition of â€œAnother Dead Soldierâ€Â, â€œI Wanna Be your Dogâ€Â (that Stooges classic) and another final barrage of â€œNo Governmentâ€Â.

At the end, I knew the journey down from Manchester had been completely worth it, as did those who’d also made special trips from places like Welshpool, Peterborough and the loyal fans from the band’s hometown of Derby.

Onwards and upwards to Rebellion, The London Punk Festival and who knows what else after that?

The night was complete. And perfect. It left me remembering why I loved Anti-Past and why I need to see them again. Soon.
Lawrence Chapple-Gill â€â€œ Manchester