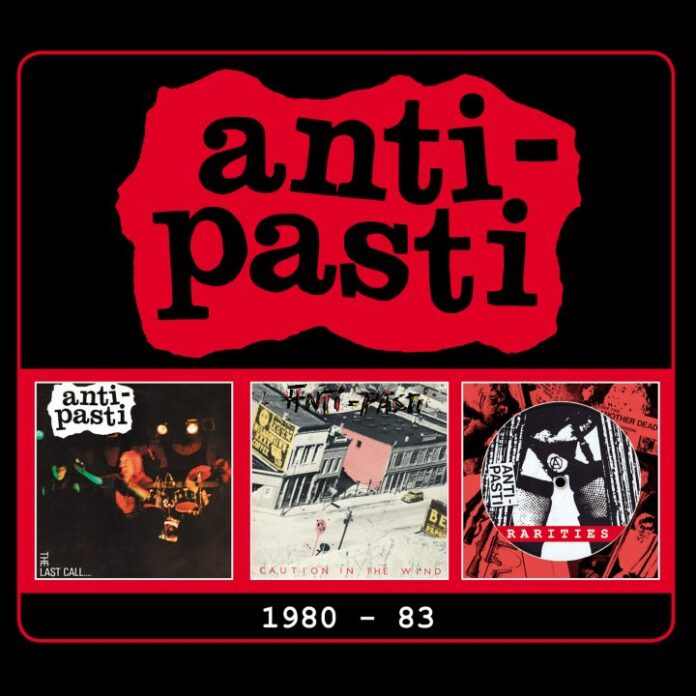 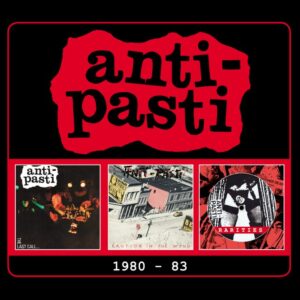 New 3CD set featuring everything recorded by Derby’s premier UK punk band Anti Pasti during the early 1980s, including debut LP The Last Call, which hit the top 40 of the UK album charts…LTW’s Ian Canty tries out this for an appetiser…

Forming out of 1970s Derby punk act the Scrincers, the first Anti Pasti line up to record featured vocalist Martin Roper, Dugi “Tinker” Bell on guitar, drummer Stan Smith and bass player Stu Winfield. They released the Four Sore Points EP on their own Dose record label in 1980, which was pretty much an instant success. The extended play featured their standard bearer No Government, 1980, Something New and what proved to be a controversial cover of the Epileptics’ Two Years Two Late. They also recorded Ain’t Got Me and Another Dead Soldier, which were later released as part of the Don’t Let ‘Em Grind You Down EP, a split with the Exploited that topped the independent charts during 1981 and even nudged into the Top 75 UK singles.

After undertaking these recordings, Smith and Winfield dropped out, to be replaced by Kev Nixon and Will Hoon respectively. This gave Anti Pasti some stability and the band began to make headway on the local live scene, impressing whilst putting on some spirited performances supporting bigger name acts.

Their progress was underlined when Rondelet Records, a larger Mansfield-based imprint that was looking to dip its toes in the latest punk wave, reissued the first EP and also put out a new single Let Them Free. These were both sizable hits on the Independent charts and consolidated them as a force on the punk scene. When Six Guns hit the top of the UK Indie singles listings and debut album The Last Call reached number 31 of the national album charts, Anti Pasti were arguably one of the top two biggest “new punk” bands in the country.

The debut album makes up the first disc of this new set. While the record is still fairly entertaining listening, there is a bit of a lack of originality as they recycle some other people’s riffs wholesale. If you can put that to one side, this LP is rather jolly and enjoyable. On the evidence offered up here, Anti Pasti tended towards a faithfully recreated 1977 sound, rather than the more hardcore bursts of contemporaries GBH and Discharge. The set gets off to a good start with a re-recording of No Government, to my ears there’s more than a splash of Sham 69’s Red London in there, but they repurpose it powerfully enough.

One thing that is in Anti Pasti’s favour is that you can actually hear the bass properly on this record, unlike a lot of UK early 80s punk. There’s some really nice bass runs throughout, particularly on the instrumental Brew Your Own. Call The Army (I’m Alive) has a neat fuzzy feel to the guitar and if Another Dead Soldier does take a fair bit from the Undertones, they do manage to put their own grimy stamp on it in the final analysis.

The thrashy title track is also pretty good and 24 Hours comes over shouty and riffy in a good way. Truth And Justice, which again highlights the bass, has an admirable restraint in building up to the chorus – at the time a lot of punk seemed to want to get it all over in the shortest time possible, so this made for a refreshing change. The Last Call finishes with the more rock & roll Hell and their speeded up Stooges cover I Wanna Be Your Dog. Coming complete with the requisite amount of energy and an eye for a good tune (not always theirs to begin with though!), The Last Call never hangs around long enough to get dull.

Obviously by 1982 Anti Pasti had reached the limit of where their basic punk format could take them. Album two Caution To The Wind needed to broaden things out more. To this end Hoon’s brother Ollie came in on second guitar. What their new approach added up to was slightly more tuneful vocals, a small reduction in pace and as far as the opening title track was concerned, plundering Government off the first Chelsea album. Actually Gene October’s boys circa their 1979 debut LP are a good musical reference point – Anti Pasti employed a similarly chunky, ringing sound, mid-paced tempos and big choruses on this record. The dual guitar work on Get Out Now helps make it very punchy and the song itself is memorable, with The Best Of Us cutting a similar ebullient swathe.

Elsewhere they really branch out onto something different with Agent ABC, which is really like a flute-lead take on Stevie Wonder’s Uptight! Must have confused a few mohawks somewhere along the way I would have thought. The organ line on Guinea Pigs pitches it midway between 60s garage and punk and final item Beyond Belief borders on a light pop style, which sits ill with what has gone before. Overall Caution To The Wind is pretty uneven, but one has to give them kudos for not cranking out the same old thing, something that probably would have sold them more records in 1982.

The new formula came together well in fits and starts on the album, but it was not enough to rejuvenate the band. Roper left in early 1983 not long after the LP’s release and though Anti Pasti struggled on for a few months without him with Bell on vocals, they had split up before the year was out. The Hoon brothers recorded for the fashionable Kitchenware label as part of the Linkmen, but otherwise not much was heard from the various band members.

The final disc of this set collects together single tracks and oddities. The first EP is pleasingly raw and three feisty cuts from the Apocalypse Now tour in 1981 show the band’s live prowess. The ramalama Let Them Free and Six Guns where both strong singles, even if the latter was very reminiscent of the Scissors Fits’ 1979 classic I Don’t Want To Work For British Airways. The single version of Hell is like a mini 1980s punk Troggs Tapes, where the band struggle to finish the tune against the clock, with the song failing and starting again more than once.

Their magpie ways crop up again in the intro to Burn In Your Flames, which bears a strong resemblance to Did You No Wrong, other than that this b side to East To West is a fair rock/punk crossover. The flipsides of Caution To The Wind’s single release end this disc. Last Train To Nowhere and Blind Faith both harness 12 bar, with the former being superior, having a decent chorus

It’s an irony that probably the best known Anti Pasti tune No Government features the words “brew your own it’s about to ferment”, as after leaving the band singer Martin Roper went on to run pub tours in Derby. The band regrouped in 1995 and also in 2012 to play the Rebellion festival. The latter was a more lasting reunion, with an amended line up of the band completing the Rise Up album in 2016. They even featured Glynn Barber from Chron Gen on vocals for a time and currently perform with bass player Ben Hanson handling singing duties.

The Last Call might have not be overly original, but it did make a mark and was whatever your conclusions about the contents, it was a consistent effort and good fun to listen to. The second album was a brave attempt to strive for something different that didn’t always work. The rarities disc mops up the rest of their work and provides a glimpse into their form on stage at their peak. On reflection Anti Pasti at times were exciting, but in a way they were victims of their own success. As a consequence of their early triumphs, they were launched to the top of the league of 1980s punk, when perhaps their true position was more towards mid-table. There’s no real disgrace in that and hindsight, plus this set, lets us see their genuine worth as providers of some entertainingly noisy and vigorous punk rock along the way.