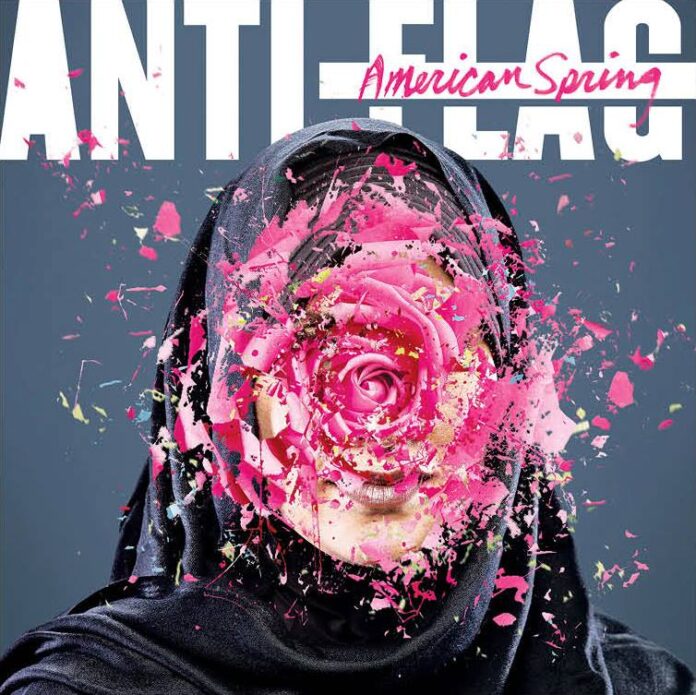 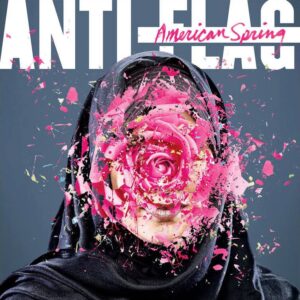 Straight outta Pittsburg, PA, Anti-Flag are back and are more angry and conscious than ever with their tenth album, American Spring. The band released The General Strike in 2012, and since then a lot has happened, and hasn’t changed, within those three years, and they’re here to tell you about it.

The title “American Spring” may put some people off, as a friend of mine picked up on, however, the album openly addresses personal, close to home inner struggles in the same vein as “The Bright Lights of America” album, as well as worldwide issues in an easy to digest way. This is something that will appeal to the band’s followers and new fans who will no doubt be welcomed to the fold with open arms.

As with every band that seeks to continuously improve as musicians and as a unit you can hear the progression in the song writing from previous offerings. Yes, it is a studio album, but without any doubt you can still hear and feel the raw energy and emotion that has gone into creating such an art, and this is a theme that is carried throughout the record. It’s raw, it’s honest, and it questions the status quo of 2015. Something so few seem to be too scared or comfortably cynical to do.

The album kicks straight off with the frighteningly honest “Fabled World”. Straight to the point both musically and lyrically, you know what you are getting and if you’re in anyway as inclined as these four gentlemen then you will probably instantly feel as excited and angry from the word go. You will also find yourself wanting to dance and throw your fist in the air at every given opportunity.

The call and response vocals of Chris #2 and Justin Sane are introduced and showcased in “The Great Divide”, one of many elements that give Anti-Flag their signature sound.

“Brandenburg Gate” sees the album’s first cameo appearance in the form of Rancid’s Tim Armstrong, with Tom Morello (no introduction needed here) putting his stamp on “Without End”. The song kicks off like a Social Distortion-esque summer drive along the coast jam filling you with nothing but good vibes and that is the beauty of this band and their style – whilst the lyrical content of this song is something not a lot of people would like to read written down as an open letter of discontent from a sense of loss, you can’t help but be picked up by the catchy as hell chorus and the melodic vocal lines of Justin Sane and Chris #2.

“Sky is Falling” slows things down a little but doesn’t take anything away from the urgency and angst. Opening with an eerie bass line that sets the tone for the next four minutes, this right here is classic Anti-Flag, if there ever was such a thing.

“Set Yourself On Fire” is open to perception. To me, it could be directed at someone you have had a petty falling out with after a clash of interests, or at the complete opposite side of the spectrum, any of the outlandish leaders of the world we currently reside in. Never the less, another standout song.

What has become more and more apparent in the more recent Anti-Flag releases is the shared vocal duties of Chris #2 and Justin Sane. As they both have their own sound and differ in the way they sing, shout and bring across softer tones and aggressions, this brings a dynamic to the songs that a lot of other bands would struggle to match as showcased on “Song For Your Enemy” and “All Of The Poison, All Of The Pain”.

Delving into the latter half of the album, “Break Something” sounds as though it could have easily taken the place of “Fabled World” in pole position. It is a song of equal measure in all aspects and probably shouldn’t be listened to if you have had a bad day at school or work.

“Without End” takes another turn into a personal vein, slowing things down dynamically but still sounding pretty heavy. There is a new found raw energy within these lyrics and the song could have easily been the last song on the album, bringing everything to a tidy close.

Alas, there is more. “Believer” brings back in the riffs, the hard hitting rhythm section and singalong choruses and leads straight into the anthemic “To Hell With Boredom” short-lived at only 50 seconds long, but that’s all that is needed to make the point.

The final song on the album is well placed in the form of “The Debate is Over”. Very cleverly stating the title as the last vocal line of the album and in a sense the closing statement of an argument that has no doubt just been won, as presented in the music that preceded it.

Anti-Flag are a band that can fall foul of the ‘punk rock’ pidgin hole that is every so rampant in the scene today, but they have homed in on their own tailored sound that is unique to them and their own way of presenting the facts with their songs, and this can be heard throughout the album. Gone are the days of songs primarily consisting of three or at a push four chords and a shout along commentary. These songs are well written and constructed, consciously thought out and put together by musicians with a goal in mind, and the hard work has paid off.

The only MINOR let down for me, which I’m still questioning on the final draft of this review, is that the album seemed a little too long at 14 songs, but then again it’s only 41 minutes, and there’s a lot that needed to be said, and none of the songs come across as fillers – they all stand out in their own right, again something that a lot of bands aren’t striving to do. Everyone seems to be looking for that one hit single, but that is not the case here.

The standout lyric for the album for me was pretty easy to pick out. The very simple yet effective rally cry question of “What are we gonna do now?” – I don’t think this needs a follow up comment. It says it all.

Over all this is Anti-Flag at their best and in their true form. An album full of catchy hooks, singalong choruses and straight to the point statements shouted and screamed over the top of Pat Thetic’s solid drumming that could rival the rhythms of Tre Cool, and the ever climbing bass lines of Chris #2 and the rasping guitars of Chris Head and Justin Sane respectively.

This album is sure to appeal to the already converted and faithful followers of the band and kicks the door wide open to welcome prospective new fans too.