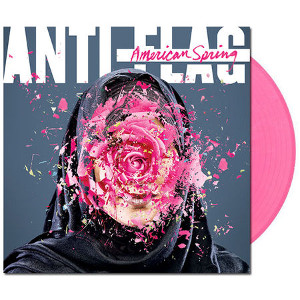 Pittsburgh neo-punks Anti-flag take on neo-cons in a call to action on their new LP.

I have to confess that Anti-Flag are one of those bands I’ve been aware of but never knowingly listened to, and here they are at their tenth full length outing. Truth be told had I not been asked to review this I might still be in the dark.

On first listen I had this written off as too highly polished, too pop, and too much like the sort of thing that MTV and rawk DJs love to play. But first impressions can be wrong. With a few listens I saw beyond the glitz and got acquainted with something with a little more depth. The press pack told me this is “neo-punk”. I’d never heard of that before so I had to look it up on the tinternet. That proved little use. The only thing that was clear to me was that neo-punks can’t agree on what neo-punk is any more than punks can ever agree what punk is/not (How many circular conversations have I had over how many pints on that subject?). One thing I found interesting is that Spinefarm Records is distributed by Universal – the largest music corporation in the world – so I guess the resistance to major labels hasn’t transferred to the “neo- it-yourself” scene.

Anti-Flag manage to mash up some serious political messages in the kind of package that will appeal to your skating, mall inhabiting, Hot Topic shopping American teenager who has no way to find the underground hardcore scene. Just as I type that I’m reminded of the fact that when I was with my partner and some friends in Connecticut at a suburban mall trying to locate some vegan food in the food court. The young folks working at the Falafel bar said “Are you guys in a band? You look like you’re in a band”. We just looked like punks but must have been the most exciting thing to happen there for a while. These are the kids for whom bands like Anti-Flag probably make a huge difference.

Anyway, back to those messages. Anti-Flag cite influences such as Howard Zinn and “The Debate Is Over” owes a debt to Naomi Klein’s “This Changes Everything” attack on capitalism according to the press pack. “Sky is falling” tells the tale of a drone attack from the point of view of the people below rather than the ones watching on their TV screen and works to good effect. There is an element of darkness, desperation & fear in the song.

When the opening track “Fabled World” decries “A corporate crowded killing field” set up to “subjugate torture and abuse for the few” they are nailing their colours to the mast. I’m reminded of that Bernie Rhodes T-shirt “You’re Gonna Wake Up One Morning and Know What Side of the Bed You’ve Been Lying On.” Those times are fast approaching and Anti Flag have made their choice clear.

Anti-Flag must have been influenced by some of the old posi hardcore bands like Seven Seconds or Ignite with their whoa whoa singalongs and bands like NoFX or Green Day at the more pop end of things. There were moments when the CD had me thinking of Avail, and one track that I didn’t get on with which irritatingly reminded me of Nine Inch Nails….depressing isn’t the word! They also deploy an angry backing vocal which sounds like some goblin is shouting at you from the dark shadows.

Brandenburg Gate stands out as different from most of the album: Rancid meets Billy Bragg round at the Dropkick Murphys house with it’s “I will wait at the Brandenburg gate, at the Brandenburg gate I’ll wait”. But then Tim Armstrong guests on the track so it would sound like Rancid wouldn’t it? What could appear to be a song of lost love uses Cold War Berlin as a metaphor for current foreign policy and conflicts – for communism replace, well, anyone who gets in the way of US corporations. The closing line “I lost my baby to a foreign war” seals the deal.

Catchy riffs and choruses abound. “I wanna break, break, break something” appeals to the Smash It Up nihilst in me but it’s the damn catchiness of it that made it stick. A lot of the time the drummer seems to keep time by battering hell out of his crash cymbals, a habit most drummers couldn’t afford to keep up for very long, and it makes for a high octane sound.

This isn’t the sort of thing I’d reach for but those of a pop-punk persuasion will definitely like this and it’s great that a band with this level of exposure are using their potential to open up the eyes of their listeners to the shit going on in
this fucked up world rather than just going for the easy grab teen rebellion bullshit.  They promote the likes of Amnesty International and provide an alternative narrative to the Establishment line. Having said that, multinational corporations are part of the problem that bands like Anti-Flag are taking on in their lyrics. The age old dichotomy that has kicked around since the Clash signed to CBS – reaching a wider audience or compromising your values? There is no escaping the fact that capitalism lies behind war and environmental degradation – Conflict summed up the argument fairly well: “you’re supporting the foundations we are kicking”. The American spring won’t happen until people wake up from the consumer stupor & stop propping up capitalism.

Check out Anti Flag online at Facebook or at this year’s Rebellion festival.

All words by Nathan Brown. More of Nathan’s writing for Louder Than War can be found at his author’s archive.