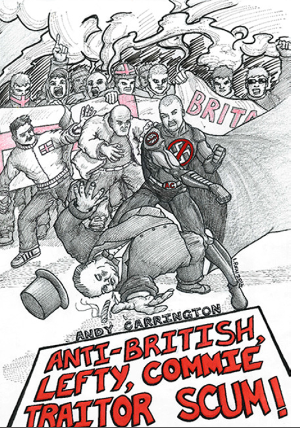 Louder Than War’s Nathan Brown picks up a book of poetry to wander lonely as a cloud and ends up putting the boot into some boneheads instead.

When I first opened up this collection of poems on a laptop on a train journey it wasn’t long before I snapped the lid shut.  I didn’t want anyone to casually glance over and completely misunderstand my political leanings.  In this volume released late last year, Carrington returns with another attack on the (dis)organised far right and their idiot cousins the EDL.  In the process he ridicules their rhetoric and language by using it in his poetry – kind of like verbal ju-jistsu.  Andy Carrington is an anti-fascist poet but he has to use those words to show up the fascists and boneheads for what they are, and the result can sometimes be ugly. It is, at the same time, funny and sad because you know that while you laugh at their stupidity there are people out there who actually talk like this and mean it.   And some of them don’t stop at words.

Andy’s angry and goes straight for the jugular with his take on what he sees around him.  In “Dickheads in Flat Caps” (one of many amusingly titled pieces), his response to Britain First’s claim “IT’S NOT RACIST TO BE PROUD OF YOUR COUNTRY!” comes back “No, but it is fucking stupid to think it makes you a better man.” No punches pulled.  I have no problem with swearing. In fact I positively endorse it. The title page alone was enough to have me sporting a wide grin and with 50 titles it’s difficult to pick out the best so here’s a few favourites:

I also love the cover – deploying Carrington as comic book superhero taking on the fat capitalists and their nationalist lackies which sets the tone for the contents.  He’s angry, he’s serious about tackling what is destroying this country, but he doesn’t take himself so seriously that he can’t raise a wry grin from time to time.  So with a good cover and amusing titles, he’s off to a good start.  The title, by the way, is a quote from one of his adoring fans in the master race.

Of particular interest is that he has turned his attention to football: something of a sacred cow that normally escapes criticism despite the inflated pay and rip off capitalism that exploits fans of the game.  The focus here is more the rampant violence and racism in the name of football (if you need an example: Video of racist Chelsea fans on Paris metro) which for some halfwits is more important than the game, bringing us full circle to a “British” mentality to be ashamed of.  As far as this reviewer is concerned the EDL are just another “firm” looking for a ruck, who are thick enough to have been hoodwinked by a far right agenda.  Half of them don’t even know what they are for or against (Muslamic Ray Guns aside) but people trying to go about their daily lives are on the receiving end of their shit.  As for Carrington, he has a point about football as a distraction: “If we took some of the passion out of sports and put it into something more meaningful we’d be a lot better off”.

Some of the topics covered are not new but what makes Carrington different from, say, Russell Brand, is that it’s very much drawn from his own personal experience of meeting, living and working among racist fuckwits and a “Great British Public” whose own apathy fucks them over as much as the country’s politicians and global capitalism does. Reflections on the author’s battles with depression and Crohn’s disease bring the personal into the political.  And anyone who has to deal with an arsehole boss, or dodgy landlord will find a fellow traveller.

An excerpt from “Maggie’s Child” about the death of Thatcher illustrates his well targeted hatred:

“The racism, taxes,
unemployment
— they all date back
to you;
so I’ll drink
and many will party;
and even if we know
this won’t change
a thing
– we’ll rejoice!
Then soldier on
when your funeral’s
over and done.”

While most of the titles provide a clear clue as to their content, “For Mensi” is not a tribute to the long term anti-fascist singer for the Angelic Upstarts as I was expecting, but deals with the problems faced by people whose families face being split by UK migration authorities: something Mr Mensforth was fighting at the time the piece was written.  An act of solidarity, which is something we could all do with a bit more of.  That’s the thing about poetry – sometimes it’s not stating the obvious, but then again sometimes it is.

I always find poetry is a bit more engaging when read by the person who wrote it, so try and catch Andy Carrington live if you can, perhaps at the 0161 festival which will receive £1 of every sale.  Meanwhile he’d probably prefer you bought his book of poems. Get it here.