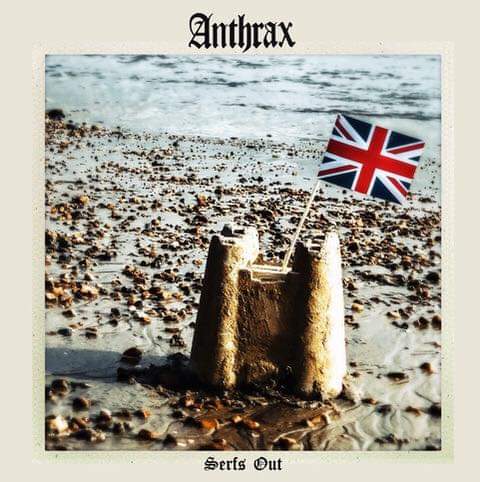 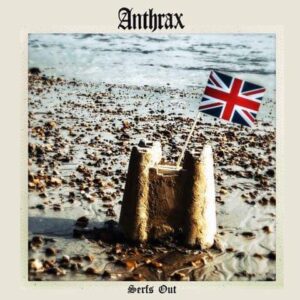 Anthrax – Serfs Out (Grow Your Own)

In their first full length offering since 2012 anarcho-punk stalwarts Anthrax lament the state of a Brexit Britain that doesn’t care for its people, run by a cabal of lying coke head chancers who have managed to hoodwink the nation. They ask: Where did we go wrong? and How the hell did we end up here? Nathan Brown calls it an understated masterpiece.

Anthrax have a high bar against which this album will be judged – their first full length release since 2012’s All For The Cause. I’m talking quality rather than quantity. Fortunately they are a great song writing machine. Their words are typically pithy and thoughtful, focused on what is going on in the world around them. Their sound exemplifies the best of the anarcho punk genre balancing a punchiness with plenty of melody while being upbeat but not delivered too fast.

While Grow Your Own Records has been home to some amazing music – and some of my personal favourites – over the past decade, it is Anthrax who are the jewel in the label’s crown. Not that they believe in crowns or have much interest in jewels.

I first played and reviewed this record without the titles or cover artwork. The whole album was an impactful enough statement of the state we are in but the title and cover art sets it off perfectly. I love a bit of word play me. There are so many connecting themes in the title Serfs Out and the sandcastle images that I could write several pages just picking that apart.

Taken as a whole this album comes across as a mix of incredulity that this country is in the mess it’s in, while describing the extent of that mess, noting that it has been carefully concealed wherever possible. So, Anthrax begin to answer the big question they pose. Serfs Out is something of a concept album in that respect, encapsulating many of the conversations or thoughts people are having in real life (IRL is a mythical land that exists outside of the internet and social media). In my opinion this album is an understated masterpiece bringing the raw anger of punk together with on-point intelligent lyrics and witty puns. It uses memorable melodies and a tuneful musical approach without taming the angry beast.

A whispy tune and subdued intonation of “softly softly catchee monkey” heralds the opening of Dumb It Down. I thought at first I had been sent the wrong album. A few seconds later in kicks Oscar’s familiar vocal – possibly captured at his angriest. “Dumb it down, dumb it down, vilify, throw it out there, repeat the lie”. With its mention of Novocaine to dull the senses I immediately thought of the cocaine fuelled idiots running/ruining our country and the chorus is an indictment of the behaviour of that Bullingdon elite. “Lack of feeling, Novocaine. Ignorance is strength. No face to the pain. Love the oppressor, loathe the oppressed, all god’s white children are blessed”. A robust bass sound and bright chiming guitars in the cheery middle 8 bring us back into the verse with a simple but effective lead break. A soaring lead guitar carries us to the crescendo as the song crashes out.

Next up, Beg Society first appeared on a split single with Burnt Cross in 2014 (see what I said about it back then). With the passing of time the message has not changed but it has become more urgent and angrier in line with how the situation has worsened. Anthrax provide a more aggressive, brighter and atmospheric rendition than the original with a few subtle changes. The theme of politicians ripping apart communities and country continues – the likes of Mrs Jones are reliant on “hand outs, food banks and charities”. The close of the song builds claustrophobic tension. A welcome return for a song that 7 years on is still relevant, as people have been “sold down the river by the I’m Alright Jack brigade”.

The woody bass growls over a melodic guitar during the intro of Fear Sells before morphing into a jaunty tune with something of the circus about it. “Roll up roll up. Before your very eyes. Watch as so many fall for so many lies…”. There is a warning to be vigilant when Oskar sings in the catchy chorus “Bring on the Dancing Girls, All The Whistles and Bells” it’s about the carefully deployed distractions that keep us occupied (bread and circuses). No wonder we don’t see what is going on behind the scenes. There is a reverb laden guitar break that has similar qualities to East Bay Ray’s guitar on the Dead Kennedys’ Frankenchrist album. A key change towards the end of the song ups the ante, winding up the tension before juddering to a halt.

A palm muted guitar and a scratchy guitar vie with rolling drums to create a tapestry of frequencies on Misery Loves Company. Newest member Lara delivers up a vocal performance of verses in the tradition of anarcho-punk, delivered almost as matter of fact statement. “We’re all out to get you with our free for all, we’re all out to get you with our something for nothing. We’re all out to get ya, standing shoulder to shoulder but you carry believing all the shit that they told ya”.   The second half of the chorus has a sing song quality to it and the guitar break has that Frankenchrist sound to it again. Concluding a song that opens with “The Haves against the Have Nots”, Anthrax ask “Where did we go wrong?” in an album that has already laid bare the state we are in.

A driving bass and atmospheric echoey guitar open up The Spark before Zounds-esque downstrokes on the other guitar herald the song proper. Having asked where we went wrong, Oskar sings a follow up question: “How the hell did we end up here?” in answering it they include lies, damned lies: “Misinformation is all we hear, creating doubt as the weapon of choice”. While 80s anarcho-punk songs were all too often about impending armageddon and global conflict, today’s focus is understandably here, now and at the level of town, village, neighbourhood, individual.

In the middle of the song, Lara and Oskar chant through a list of the tricks used by the powerful few to hoodwink the many before suggesting a suitable response: “Come ouf of the fire. Become the spark. Combine together. Transform the dark. It’s their agenda, its not written in stone. It’s their agenda which we’ve outgrown”. They then list ways we can achieve this including compassion, dignity, respect and tolerance. A positive thought on which to leave side 1 – there is a way out.

A jaunty guitar starts the first track of side 2, Island Mentality, which develops into an upbeat number. Slogans often heard from the mouths of closet racists are thrown in: “Charity begins at home. Gotta look after your own”, “They put them up in hotels 400 hundred pounds a night”, “All lives matter”. The attitude of Little Englanders is exposed and the songs closes with the punch-yourself-in-the-face hyprocrisy of their rhetoric: “We used to build quality. you couldn’t get much finer. I would buy British but it’s much cheaper from China”

The heavy bass and pounding drums of Dead Air provide the foundations for haunting yet uplifting guitar melodies. A song about the “social cleansing” rapidly taking away the music venues that Anthrax and others used to perform in, along with the gentrification pushing all but the rich out of places like London. The chorus resounds like the echoes along streets empty of life and culture.

Dead Air was previously one side of a limited 7 inch as part of the “Foxpack” series of singles raising money for the Hunt Saboteurs Association. The song was only available to the 300 subscribers to that set so, like the other 2 songs on the album that are re-recorded versions of earlier single tracks, there is a clear rationale behind its inclusion.

Shot is a busy song with stops and starts punctuated by a massively overdriven bass. Its familiar message is that left or right are out for their own ends, not ours. 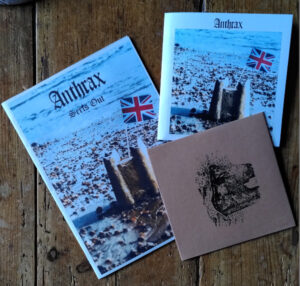 The next tune Dirty Bomb, was a track on a 4-way split 7 inch in 2015. On this album it has slightly different sound but the same word play and a wonderfully catchy chorus which vies with an impressive back catalogue to be one of Anthrax’s finest moments: “If we don’t stand for something, we will fall for anything – anything they choose to give. Blame culture’s just the start, rip our communities apart as they battle to control the way we live”. (Checking a review of the original 7 inch it featured on, I said that last time!). This is a significantly different version of the song simultanesously capturing extra aggression with a contradictory softer more atmospheric backing – all egged on by a superbly overdriven bass. The drop out in the middle seems to have more space in it and there is something almost jazzy going on.

The album finishes with an almost folky feel, despite the overdriven bass growl. Take Back Control has a particularly epic big sound to it with extra instruments going on in the background. It could be the score to a gritty mystery drama series or a film with additional layers of fiddle building the depth of the music. “The Lion Roars” using the emotive language deployed by Brexiteers and would be Empire builders. “Take back control from who?” Anthrax ask of those who’ve driven our country down the shitter. It’s a melancholy lament of what this island nation has become through its self flaggelating exercise in xenophobia and isolationism spurred on by neo-liberalism.

As the record closes with a soaring guitar Oskar shouts “The Lion Roars” and then completes the sentence “The Etonians have spoken”. The theme to the album is complete…we’ve been had by the toffs…yet again.

In summary, Serfs Out shows how Anthrax have matured and experimented since All For The Cause! There is plenty of variety to the sound without anything sounding incongruous. It builds up with the first couple of tracks coming in really angry. Lara’s vocals break up the sound. Here and there is a peace punk/latter period melodic anarcho vibe like some of the stuff that came out in 84-86. As the record closes it adopts a more melancholy, reflective sound – after the anger has died down. I reckon the kids will love it. (caveat: the kids are now mostly middle aged but still badly behaved).

As always, there is a lyric booklet and it is clear that plenty of thought has gone into the presentation and layout of the cover. The CD version comes in an enveloped presentation envelope to accommodate the booklet, cover and inner sleeve. The vinyl comes in “eco-vinyl” which is a mix of the different colours used by the pressing plant that day. A swirly brown mess, it has been nicknamed “Southern Water blue”.

Grow Your Own Bandcamp