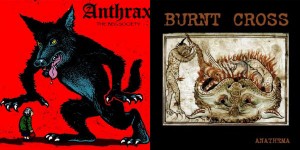 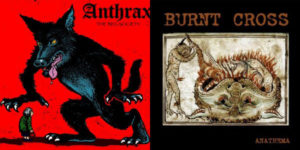 Angry anarchists can still do tunes. Anthrax and Burnt Cross prove it. One for the anarcho-punk in your life.

Anthrax were prevalent in the anarcho-punk boom of the early-mid 80s.  For those who haven’t come across them before they were always very distinctive, managing to mix anger in the vocals with melodic punk tunes.  Their offering on this split 7″, Beg Society, starts off with a chuggy rhythmic guitar before the bass, stompy drums and a second guitar playing harmonics gives it an 80s vibe.  Not in a bad way, though.

No prizes for guessing the song tackles the state that our country has got into with the shift of responsibility to a non-existent “Big Society” which is supposed to look after everyone as the state that actually has the means to do this retreats and adopts a laissez-faire approach – except when rich capitalists need bailing out.  The song takes the form of a conversation with yer average Mrs Jones and quickly focuses on the problems we as a society face: privatisation, food banks, everything going out to tender and becoming an exercise in shareholder return, “Care and compassion is no longer in fashion. Once again the tables get turned as the poorest get burned.”  As the song progresses the lyrical anger builds with the tension in the music, taking on an almost anthemic quality with some powerful guitar downstrokes.

People wanting to hear the Anthrax of the 80s will recognise similarities with their classic tunes – a mix of anger and tunefulness – but this is no rehash.  The band have progressed and they ain’t afraid to show it but they’ve not forgotten their roots and their anger has not mellowed with age, it has matured.

Whereas the Anthrax song was recorded by 5 people live in a studio, Burnt Cross – as is the modus operandi which enables them to churn out music at a prolific rate – recorded their two songs on an 8 track in a bedroom, utilising double tracked vocals to achieve a seamless tirade.  Anathema (Wings Of Fear)  is a driving tune, boosted by some echoey lead breaks with the military industrial complex in its sights. The usual team of the two Marriott brothers is boosted on this first track by vocals from Maureen Bourne (a member of Men Oh Pause with a 7″ due out soon and partner of Tadpole impresario Darren).

The Inner Revolutionist bears some similarity to early 90s Conflict, specifically the song A Message To Who with a repetitive guitar melody played counter to the main riff. There is also something of The Apostles in the guitar sound, but given Burnt Cross covered them on a recent release that comes as no surprise. As the name suggests, the song reminds the listener not to feel disillusioned but to “learn to live without the mind set of a slave”.

Having tried to record at home in the past I found getting a good vocal sound very difficult – feeling too self conscious bellowing your heart out in a terrace you hold back and it often lacks something that you can achieve in a “proper studio”.  Not in this case. On both tracks, Paul delivers his words with a ferocity reminiscent of Steve Ignorant in his Crass and Conflict years.

A good package released by 14 DIY punk labels across the globe it comes with lyric sheet, stickers and great artwork from both bands but the Anthrax art wins out for me.

Get ’em while you can, this one will sell out for sure. Pre-order at Anthrax Bandcamp.

Words by Nathan Brown. You can read more from him here.