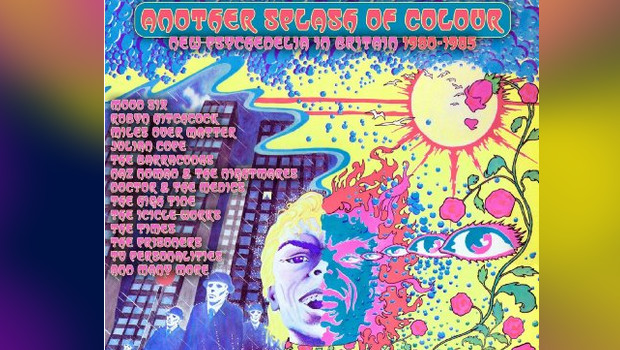 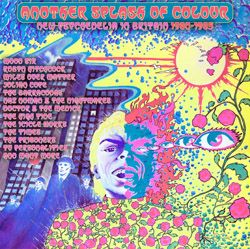 Three CD boxset looking back at the time when Psychedelia re-established itself as a musical force after spending the 70s in the doldrums….Ian Canty dons the Paisley and delves deep into the Groovy Cellar…….

Though a few folks had kept the freak flag flying right through the late 1970s (the Soft Boys for one, featured here on one of their later recordings “Only The Stones Remains”), psychedelia was pretty much a dead duck even before Punk sparked off in 76. It took a while for that particular 67-minted approach to be taken even a little seriously again, difficult to believe in these times when any new act that comes down the pipe seems to prize their “trippy cred”, but true.

Of course the irony is when psych made its big comeback, just like Punk it was originally based in London around a couple of shops and a small club scene. The Regal and Sweet Charity shops scoured second hand outlets for stock and made their own garments taking inspiration from the outlandish 60s originals like Granny Takes A Trip and Hung On You. At the Groovy Cellar in Piccadilly plus the Clinic based at the Blitz Kids’ old hangout Billy’s, DJ and psychedelic evangelist the Doctor (Clive Jackson) pumped out the Seeds, Standells and Love to ravers and ex-mods who were seeking something different after that revival petered out. To paraphrase scene leaders Miles Over Matter “something was happening here”.

The music papers had been stalking the Soho clubs since being caught cold by the new romantic craze the previous year (in fact that had been going on since 1978 without being noticed much), got wind of it and began hyping without further ado. Before long the “New Psychedelic” movement had even made the national press and before long Mood Six, the de facto Pistols of the movement, were being interviewed on BBC’s “Nationwide”. Record companies circled as this “Flower Power for the 80s” looked set to become the “Next Big Thing”. With all this going on a backlash was inevitable and as EMI put out the original “Splash Of Colour” LP at the turn of the year it was open season on the bands and scene. Things quickly died down.

That album was always a bit of cash-in but it works well to form the basis for this new collection. However this box-set pushes further on through the decade, featuring both the obscure and better-known names side by side to present as clear a picture as possible from those magic-mushroom festooned times. In this way we receive a nicely rounded view of psych resurgence in the first part of the decade of power dressing, rubik cubes (trying to complete one of them on acid must have been a nightmare) and yuppies.

The compilation follows a time line through the five years covered across the three CDs i.e the first one is mainly 80-82 and features this scene, number 2 moves more into the “Alice In Wonderland” period (the Doctor’s follow-on club from the Clinic) and CD 3 has the nascent rumblings of Creation Records. But it’s not as clear cut as that and there’s much more fun to be had looking around the more outré elements, so let us look at each set individually.

Disc one has a lot of the original “Splash” album and what stood out to me about these tracks is how they don’t really sound out of place when placed alongside a lot of early 80s pop and post punk. The huge impact of the Liverpool bands Echo and the Bunnymen and the Teardrop Explodes is noticeable on the High Tide’s opener “Dancing In My Mind” and Mood Six’s “Just Like A Dream”, but they still hold their own in that exalted company. The anthemic Miles Over Matter number “Something’s Happening Here” is the scene’s rallying cry and probably the high point of that album. All of the record seems to be solid stuff, the “Spilt Enz” on acid” sound of the Slience and the drum-roll laden Marble Staircase offering “The Long Weekend” are pretty nice. Even “the worst Barracudas track ever” “Watching The World Go By” isn’t actually that bad and the Times “I Helped Patrick McGoohan Escape” whilst not being actually very psychedelic itself captures the fun element of the whole scene.

Away from Splash we have three Soft Boys-linked recordings and of those there is great joy in hearing Kimberley Rew’s “Stomping All Over The World” again – a shame he’s only really remembered as part of Katrina and the Waves as his early solo stuff was up there with his erstwhile band mate Robyn Hitchcock in terms of quality, really excellent. Old punks abound here too: some may quibble at the inclusion of Charlie Harper and Knox but they lived through psychedelia the first time and were regulars on the Psych club scene during the timespan of this collection so why not? Plus Charlie and Knox do well here to channel Roky and Syd on their contributions. V2/Joy Division-linked the Earwigs come on like a hepped-up Hollies and Elvis Costello’s Attractions roll back the years on “Slow Patience”. One of the highlights of the set is Firmament and the Elements slightly comedic, wide-eyed spoken word with backing “The Festival Of Frothy Muggament”(!) and Nick Salomen’s Von Trapp Family freak out in fine style on “No Reflexes” which is a nice mind melt even though it makes me think of “Is Vic There” for some reason…

Moving on to CD2 things get more spaced out, with Nick Nicely’s legendary “Hilly Fields (1892) throwing the psychedelic kitchen sink at 80s production values (it must have inspired “Little Mouse” from the TV show “Look Around You”). From there the link is made with the previous Mod Revival scene (actually the Vandells from Brighton on disc one did already, but there’s far more of it here. They were a spin-off from the punk band the Depressions btw), with the Purple Hearts and Squire moving on to provide alarming acid-drenched results with their freakbeat/weird Who updates of “Hazy Darkness” and “No Time Tomorrow” respectively. Conversely the “Monkees for the 80s” Jetset and Le Mat have a wobbly but pleasing 60s pop approach on their cuts “And We Dance On” and “Waltz Of The Fool” (no jokes about my own dancing here).

This part of the collection also corrals a lot of oddballs who moved into the vacuum provided by the events in 81 having previously worked in almost total obscurity. The Deep Freeze Mice, Leicester greatest export since Joe Orton, provide a typical example of their twisted story-telling “A Red Light For The Greens”, “Difficult” band the Legendary Pink Dots trip out by “Waving At The Aeroplanes” and Paul Roland’s “Dr Strange” is, ahem, quite strange itself and would launch him on remarkable career encompassing novels, music writing and most importantly bloody great weird psychedelic records.

Michael Moorcock provides the necessary Hawkwind link as during this time Alice In Wonderland embraced those psychedelic warlords from the previous era but there’s plenty of unknown quantities on here for me. Coventry’s Reluctant Stereotypes spin-offs the Pink Umbrellas gentle sunshine pop “Raspberry Rainbow” melds in a lovely fashion with the following track by scene heavyweights the TV Personalities “The Dream Inspires” and Gary Ramon’s Modern Art jangle most effectively on “Fiction and Literature”.

Disc 3 takes us to the end of the trip, but it also signals a new beginning – the Jesus and Mary Chain were just around the corner with their Syd Barrett/Velvets/Pistols amalgam and a lot of the bands branded “C86” had their roots in the more Velvet Underground inspired element of this sound. Leading the way out of the “Living Room” and into the Creation sound were the spiky Jasmine Minks’ driving, punky “Mr Magic” and Revolving Paint Dream’s mid-period Byrds pastiche “Flowers In The Sky”. Alan McGhee’s own Biff Bang Pow also feature and the Doctor finally makes an appearance leading his Medics with a demo version of “Barbara Can’t Dance” (which curiously sounds like early Buzzcocks), the pop fame of “Spirit In The Sky” seemingly a world away.

Julian Cope flips out with a tortoise shell strapped to his back on “Sunspots” and the Icicle Works carry on the vibe started by the Teardrops on “Nirvana”. The “Television of the West Country” the Brainiac Five paddle us along the “Endless River” with their screaming guitar mayhem and the Magic Mushroom Band invoke Dave Brock on “Wild Eyed Electric”, setting the scene of the Ozric Tentacles among others. The Prisoners and the Dentists blasted out of the Medway, the gentle psych jangle of the later being a nice balance to Graham Day’s more combustible garage combo, complete with hefty helping of Hammond courtesy of James Taylor on “Reaching My Head”.

The Playn Jayn were the “band most likely to” in 1985, released a very good mini-album on A&M and looked set for big things which sadly didn’t happen, but their “In Your Eyes” shows you exactly why it should have, exciting, catchy and full of energy. The Green Telescope’s harp-led stomper “Two By Two” is an ace number I hadn’t heard before, great stuff in a Pretty Things/Outsiders mode. Captains Sensible closes off the set fittingly with his tribute to the original scene with “The 4 Marys Go Go Dance All Night At The Groovy Cellar” (his colleagues in the Damned having featured under the Naz Nomad alias earlier on with their Electric Prunes cover “I Had Too Much To Dream Last Night”).

As a whole “Another Splash Of Colour” is a valuable time capsule from a nearly forgotten era that has gone on to underpin almost everything of worth that has happened since in the music world. But far from being a museum piece, most of what’s here still sounds damn good in 2016. For the uninitiated, it provides a thorough introduction to 80s UK Psych but even for the in crowd there’s surprises in store and a remarkable ratio of hits vs misses which makes for a great listening experience. Especially on a sunny, blissed-out afternoon.

This box-set has a wonderful variety that works well (it has been excellently sequenced with great care and attention) and is a veritable treasure trove of the obscure but superb. All wrapped up with a nice booklet featuring some great photos (Boy George pre-stardom embracing flower power in the Regal for one) and a highly informative essay by Neil Taylor taking us through the years covered by the CDs, perhaps a comp of the year contender? You betcha kaftan it is!