Home News Another bad day at the office for Morrissey. New interview. 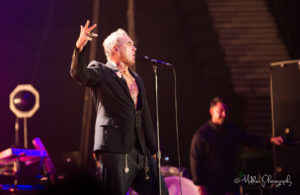 Morrissey has posted another interview on his website that sees him dig deeper into his political views and further away from the majority of his beleaguered fans. In the interview he says  Nigel Farage would “make a good prime minister” and claims “everyone prefers their own race”.

In an interview conducted by his nephew Sam Esty Rayner in April, and recently posted on his own website, Morrissey praised the For Britain party leader Anne Marie Waters and reiterated his own controversial views.

He said: “I think Anne Marie Waters is the only British party leader who can unite the left and right.

“I don’t know any other party leader who even wants to do this.

“The UK is a dangerously hateful place now, and I think we need someone to put a stop to the lunacy and to speak for everyone. I see Anne Marie Waters as this person.

“She is extremely intelligent, ferociously dedicated to this country, she is very engaging, and also very funny at times.”

He added that he had never heard her say anything racist, continuing: “But if you call someone racist in modern Britain you are telling them that you have run out of words.

“You are shutting the debate down and running off. The word is meaningless now.

“Everyone ultimately prefers their own race – does this make everyone racist?