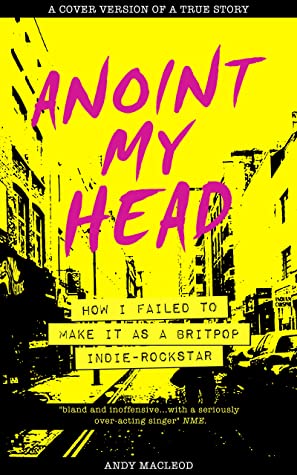 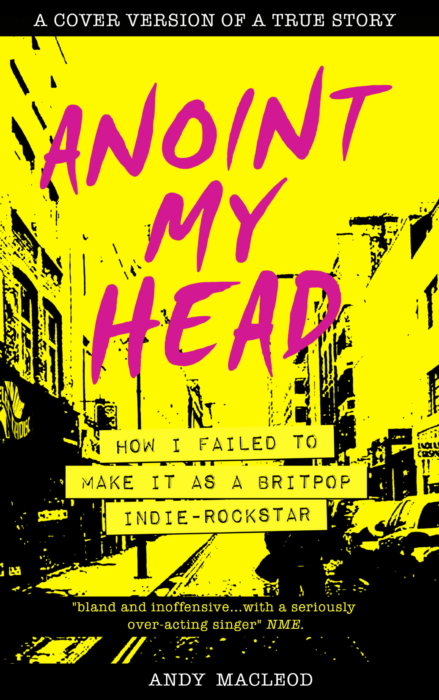 Anoint My Head is the tale of a band who didn’t become rich, or famous but had a manager who did. It’s also the story of a musical era, documenting the rise of some of the biggest British Britpop bands of the nineties.

For people of a certain age, this book will grab you immediately. At time’s it feels like you’re could reading your own diary. I’m roughly the same age as the author, many of the experiences of watching the up and coming bands at the local Student Union are identical.

Let me get the elephant out of the room first. The book begins with a hook; which I understand. The first section relaying the initial meetings between Horace (the authors adopted stage name) meeting with their manager, a ‘pre-fame Ricky Gervais. Over the first 36 pages, it reads like a pilot for the would-be global superstar. I was concerned initially that whilst enjoyable this would overshadow the story Andy is telling. Thankfully it doesn’t, and by the time the comedian re-enters the story later in the book later on it feels a lot more balanced.

Anoint My Head is a great read which rips along at pace and would make an excellent dramatisation or comedy series. Take for example The Pointy Birds first gig. The author provides a hilarious description of the gig, which only lasts a minute at a talent contest. With instruments out of tune and under-practised, the crowd use the band as ‘a coconut shy’, making their thoughts known with a volley of pints of warm beer and piss after only 10 seconds. It will have you cringing and laughing in equal measure.

Much of the story is set during 1992 and 1993 under the shadow of Suede. What eschews is a bumpy ride for Andy and his band; with line up changes, for better and worse; performances overshadowed by a Ninja and own goals, snatching defeat from potential victory. The Pointy Birds were a band on the cusp, just waiting for a break that didn’t quite happen.

Andy has done a great job catching the period and experiences anyone close to a band or would be musician may well have seen and although you know the eventual outcome before you start reading it doesn’t stop you rooting for him.

A recommended read for any music lover looking for a bit of nostalgia and escapism.