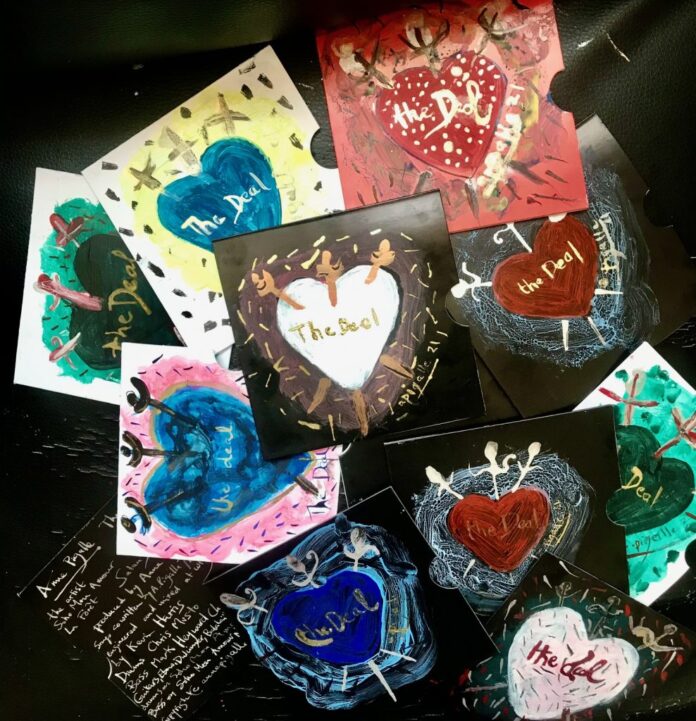 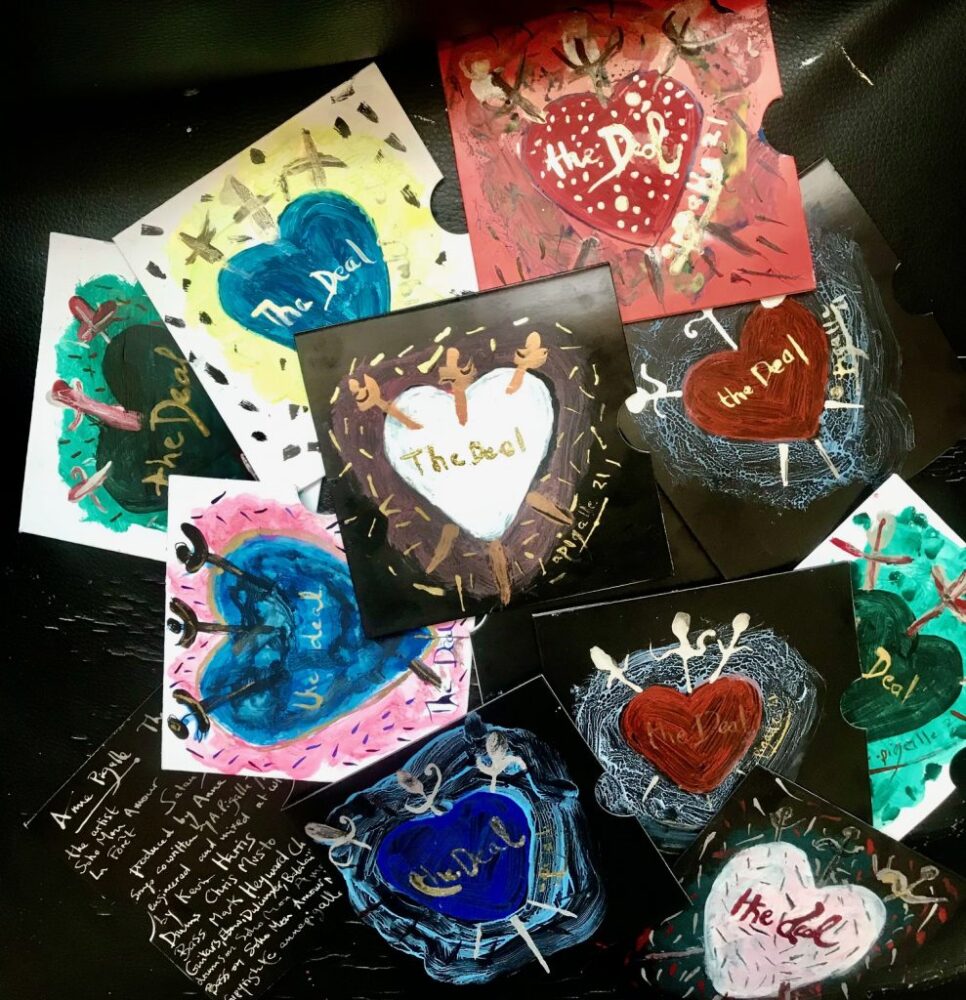 New limited edition five track EP released by Anne Pigalle with the full title of The Deal aka The Three Of Swords or The End Of Delusion. It comes wrapped in a hand painted sleeve and among the backing musicians on this recording are drummer Chris Musto, who has worked with Johnny Thunders and The Sex Pistols’ Glen Matlock. Ian Canty puts his business head on…

Though Anne Pigalle may be associated by the general public with her 1980s’ stint on the ZTT label, after that period she has worked in a number of artistic fields, often with remarkable results. In music, she released her most recent and excellent album Ecstase in 2018 (reviewed here). Anne has also ventured to refine her approach to live performance by making them into real events. To this end she has worked for her shows to become something that transgresses the common conception of “gigs” and instead becomes a source of both excitement and inspiration. The release of The Deal plays a part in this, as it will be accompanied by interactive gatherings to promote it.

On The Deal Pigalle is joined by drummer Chris Musto (who has provided percussion for Johnny Thunders, Joe Strummer, Glen Matlock and many others), bass player Mark Hayward and on guitars and various other instruments Nick Farr, who also co-wrote the songs present with Anne.

Soho Mon Amour kicks off The Deal with a gliding Bo Diddley guitar power. Here we find Anne sing-speaking a spellbinding tale of old Soho’s gaudy history that lurks just below the surface of the current occupying enemy encampments i.e. the crop of uninspiring chain stores and tourist traps. This offering provides an invigorating, well crafted and passionate introduction and is immediately followed up by La Forêt, which takes the tempo down in an acoustic folk rock mode. There’s some great singing on this that brings into focus sharply Anne’s unique abilities as a thoroughly enchanting chanteuse. She perfectly brings to life the song’s story of love and regret and sadly concludes “in the forest we kissed, we loved, we cried”.

A blast of guitar heralds Satan’s Diamonds and it soon sets off with purpose on the back of a neat rock & roll rhythm. The lyric rallies passionately against hypocrites living a lie. Musically it is a tale of two styles, as it breaks down into post punk wonder at the end of the chorus, before the beat dovetails neatly back in afterwards. This is a marvellous piece of vision, to tie these two differing sounds together and make it feel so natural. The title track of The Deal comes next on the EP, setting off at a galloping pace. Anne’s value as a storyteller is fully on display as she depicts the joy of life that are there, if we just have the bravery to reach out and grab them. A really catchy melody eases the message along swimmingly.

The final track The Artist is slower, almost stately. I hope I am not misrepresenting her, but I feel the words could be seen as Anne Pigalle’s manifesto. There is much beauty to behold here and the song comes wrapped with carefully plucked strings that put in place a musical landscape which is both wonderous and subtle. The last words on the EP conclude “The artist just says “God is a woman””. We can only hope this is the case.

The Deal is a great set of five songs that are immediately impressive as pop tunes, but also full of warmth, wisdom and depth. There is nothing else really much like what Anne is doing in the music scene, so let us cherish her work. The EP also comes clad in an attractive, hand-painted sleeve and together with the music forms a stunning artefact with so much to give. Be wise and let it into your world.