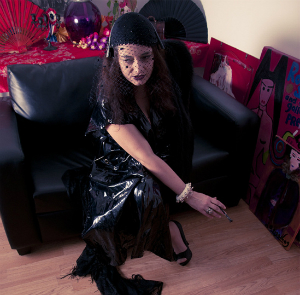 Since punk rock she has been making music very much on her own terms.

You can feel the spark up punk rock in there but this is a deep, dark and romantic music that is in the tradition of the French chanteuse but with her own twists and turns like working with On U boss Adrian Sherwood or being signed to ZTT.

A photogenic presence she is still making great records- a pop renegade whose whole life is an artform.

Anne Pigalle is the only French singer to have ever been signed to a British label.

She thinks of herself as a bit of a Joan of Arc, as no other Uk label wanted to sign a French singer at the times, things have perhaps changed now, there’s is the Art CD, Madame Sex out there right now, who the corporates have been trying to copy and paste, but to no avail,and also a new album is in the pipeline, full of songs more beautiful, one than the other, with guests musicians such as Glen Matlock etc…
‘I’m doing this top 10 in a kind of chronological order, if that makes sense.’

1/ Transformer LOU REED
The first music I listened to when I was an adult was The Velvet Underground. Adult, I mean I was about 13 years old, but I felt an adult because that’s when I wanted to think for myself. At that time in France, it would have been totally uncool for a teenager to listen to Edith Piaf. I listened to David Bowie too. And today, I also appreciate singers like Bob Dylan and Leonard Cohen ( whom I didn’t at the time ).  But with Lou Reed, it’s a different thing. It’s to do not only with the songs , but the quality of his voice, it is simultaniously velvety and acid, it touches me in a way no other singer does. Genius of Humanity. All the songs of the album are jewels, and I also love New York New York, and all theothers .Rock and Roll. Perfect.