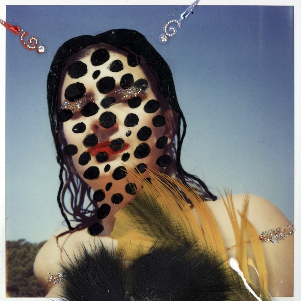 Brand new album by Anne Pigalle limited to 900 vinyl only copies, with contributions from Glen Matlock and Terry Edwards and graphics from Buzzcocks’ sleeve designer Malcolm Garrett….LTW’s Ian Canty is taken on a whistle-stop tour of Paris, Los Angeles and London with the vibrant spirit of old Soho its beating heart….

Anne Pigalle has lived the life and Ecstase is the unquestionable proof, but to be able to put those things into songs in such a spellbinding way is rare indeed. Being part of the French Punk scene, she decamped to London at the tail end of the 70s and settled in the Soho area. She swiftly became a regular face on the club scene and worked on her art. She appeared on The Tube and signed to the ZTT label in 1985 when the imprint’s stock was at its highest due to the success of Frankie Goes To Hollywood. Anne subsequently released the fine Everything Could Be So Perfect LP for them.

In 1986 she relaunched the Café de Paris club in the capital and more recently has worked on a number of projects in a wide variety of fields, including poetry, artwork and photography. Living for a time in Los Angeles, she encountered the late film director Donald Cammell who befriended her and worked on the Ecstase project in its original genesis. She returned to the UK in the 21st century to find that Soho was having the squeeze put on it by big business. Gradually the Bohemian and cosmopolitan spirit integral to the area was being eroded, with clubs and venues being forced out of existence by exorbitant rent increases, whilst the chain stores moved in.

This LP has somewhat of concept to it, taking in the various cities and scenes Pigalle has made her home and the impact the places and times had on her life. Kind of like autobiography psychogeography, if you will. Anne follows her path through the 70s Punk in Paris, to 80s London to LA and finally returning to find a Soho battered by “redevelopment” and greedy landlords, its outsider spirit nearly vanquished but still alive, just needing that spark……maybe this album is it.

This is a quite beautiful record, a true album that takes you on a bewitching journey through the times and places, perfectly presented vignettes of real life and real emotions. The sad and dramatic The Truth starts things out and The Pleasureground, which follows, has a kind of Twin Peaks-style entrancing strangeness….this record has a depth that it owes to it’s visual roots in Anne’s collaboration with Donald Cammell. La Ballade du Late Night Soho crosses Oomp Pah Pah with Music Hall and even a little of the Kilburns. If now the listener is feeling euphoric but a little dazed, Pigalle follows it with just a rollickingly great Pop tune in Black Dahlia, fast and flowing….would make a fine single. Then it is on to the dreamlike Jazz of La Ronde, a rueful and beautifully sung way end side one of this album.

Side two kicks off with the theatrical All My Love and in its wake comes Stay, a haunting but realistic ballad, with a spinetingling keyboard line. We get the beautiful Pop of A Man On Piccadilly and Fleur Du Mal uses elegant shifts of pace in its musical thrust. To finish I Found You is a showstopper that is like some great lost Bowie song from the 70s. A brilliant way to finish and also make you want to flip the LP over and play again. You listen to this album and you are really hearing someone put their heart and soul in what they believe – it is so good to hear. The musicianship and production is first rate, but Anne Pigalle’s personality and true vocal talent shine bright indeed.

I saw Anne perform a couple of the songs right in the heart of Soho next to the Blue Posts pub and it was a most inspiring performance – it’s a good thing to sing about what’s wrong of course, but to go out at the place it is actually happening and confront things (in the most tuneful and romantic way) is something else. Something special. Soho was once a place where strange and wonderful things happened like this and while Anne’s making music like this, there is at least some hope. One to treasure.