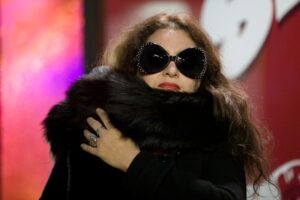 Anne Pigalle is the Last Chanteuse from Paris, who grew up with the Punk scene, released recordings in London including one in the 80’s with Trevor Horn. This last experience led her to leave London and the recording industry at the end of the 80’s for a 7 years exile in America in the 90’s.

– Ame means soul in French – the legendary Martin Stone accompanied Anne on guitar for a select performance at the private view of the event.

In those days, not many, if anyone, were promoting this conceptual style, which still remains unequalled in its profound approach to understand the rapport between love and sex.

Anne was performing her erotic poetry in galleries, and as part of her infamous amerotic salons, where she would invite people to talk about their sexual fantasies.  She performed varied places such as the Colony rooms ( Francis Bacon haunt in Soho) and the Glastonbury festival where the members of the security team would walk on stage and not want to leave, happy to recall and reveal their deepest secrets. The words of the poems often appear on the photographs, and she would equally wear the masks, as well as the costumes she created for her photographs, In 1997, it precedes the craze that we know now .

For MADAME SEX and L’AME EROTIQUE, Anne created many homemade  surreal videos. The poems, the songs, the videos, the photographs, the costumes were very much made in a DIY spirit.

After the release of a collection of songs called L’Amerotica I and II, and some of L’Ame Erotique on Itunes between 2009 and 2011,

a collection of Madame Sex vignettes saw the light in 2013, on Itunes first and then as an originally painted cd ( each cover would be painted individually ),

Consequently, Anne retrieved all material from Itunes, and Madame Sex and L’Ame Erotique only exists today as an original Art Cd .

Madame Sex and L’Ame Erotique is entirely conceived, written, produced and played by Anne Pigalle, recorded on Garageband with the occasional piano from Aaron Cahill. It was very much a DIY project, just like the photos, reminiscent of her punk teenage days but also mixing the style with more sophistication and inspiration from the great French surrealist artists. It includes guitars and toy instruments as well.

MADAME SEX and L’AME EROTIQUE is a deeper view of eroticism. Its real concern is relationships and it defies the ever-growing role of pornography in generic culture and advertising.

Anne Pigalle’s involvement with the life of Soho in London through the years reconciles her with a romantic idea of eroticism and Bohemia, which she knows too well from her upbringing in Montmartre.

The first to revamp nights in semi forgotten clubs such as Madame Jojo’s and the Café de Paris in the 80’s, she flirted with a few dates between 2007 and 2013 in places like the Café Royal and a few dives in Soho, Today, she is looking for a new label for yet a new recorded but unreleased album, written and produced by herself ( 10 songs, each one more beautiful one than the other, and executed by amazing musicians such as Glen Matlock who used to pick her up at school in Paris when she was 15! ),

And, as a teaser, she is planning to perform a few semi secrets shows in Soho in the Spring; the set will include some exotic poems from Madame Sex and L’Ame Erotique as well as some extracts from L’Amerotica and a couple of songs from the new album.

Queen Maria / Ace of Spade / Madame Sex / The Land of Plenty / Letter to an imaginary lover / Over The Top / Pigalle, London, Paris / E-rotica De Toi/ C***t Me In/ Saint Orgasm / X Amount / The Whole / La Femme Chat / Not Only The Flesh / Sulfur /Are You For Real? /You Give Me Asthma / 23 /La Pucelle / Nothing Happens…/Red Like Envy / A New Life / Le Poète Est Anglais/ The Garden of Eden / Voodoo Doll / Lunch

“As Anne Pigalle strutted her stuff, the cameramen went into overdrive. She looked as though she just got up after a night on the absinthe and sung wonderfully”JOHN PEEL

” Moody, magnificent, and with a stunning range, Anne Pigalle’s shows transport you to a world of gorgeous sensuality and vanished times. Breathtakingly good.”CHRIS SALEWICZ .