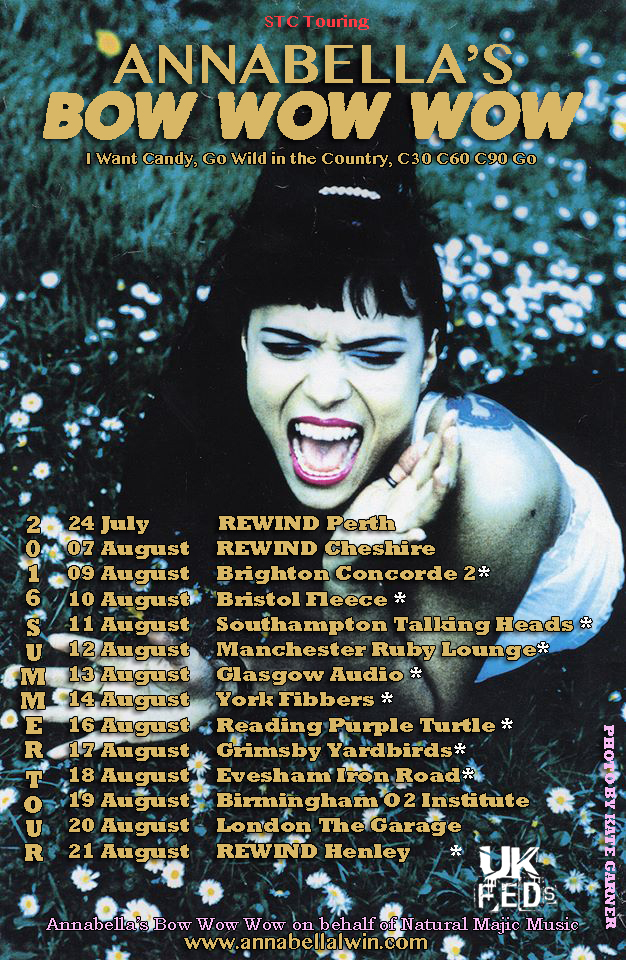 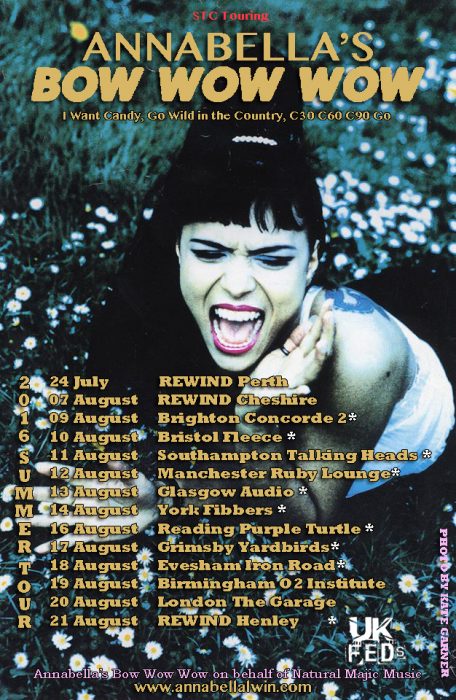 Annabella Lwin who found fame fronting the Malcolm Mclaren managed band Bow Wow Wow plying that fantastic brand drummed vibrant pop in the early eighties has returned to tour in her own name. Dates are on the poster above.

At the tender age of fourteen, was one of the most photographed, talked about and popular vocalists in the early 80’s with her band, BOW WOW WOW, who enjoyed success with massive hits such as ‘I Want Candy’, ’Do U wanna Hold Me?’,  ‘Go Wild in the Country’, ‘C30, C60, C90, Go!’. Her unique vocals, which swung between sweet fourteen and banshee squeals, defined the sound of a new and energetic pop culture; her memorable performances influencing and inspiring a brand new wave of up‐and‐coming artists such as the ‘Red Hot Chili peppers’, ‘No Doubt’, ‘Smashing Pumpkins’ & ‘Greenday’ amongst others.

Bow Wow Wow were a quartet organized by U.K. manager Malcolm McLaren (Sex Pistols) at the start of the ’80s. McLaren formed this new band, with two of Adam Ant’s original musicians Matthew Ashman (lead guitarist)  Dave Barbe (drums) and new recruit Leigh Gorman (bass)  Singers were auditioned & they decided on a teenage girl named Annabella. The band lasted three years before the musicians in the band, decided to form another band, “Chiefs of Relief”  ousting their lead singer, as they had with Adam.

In 1995, a most innovative guitarist, Matthew Ashman died.

In 1998 the two original members, Lwin & Gorman, did a tour of the U.S recording a live album for Cleopatra records, “Wild in the U.S.A”. guitarist Dave Calhoun and drummer Eshan Khadaroo filled in, featuring both remixes and concert performances from this reunion tour.

After a major show for KROQ radio, ‘Inland Invasion’ another tour sprung from this in 2004. This time with ‘special guest’ drummer,  Adrian Young from “No Doubt”,  and “Common Sense” guitarist  Phil Gough, filling in for original members Ashman (deceased) & Barbe. The group toured through 2006.

In January of 2007 the first new Bow Wow Wow recording in over two decades — a cover of the Smiths’ “I Started Something I Couldn’t Finish” was made available via digital download as the b-side to an “I Want Candy” (1982) maxi-single.

Before, during and after this time, Annabella had been a featured vocalist on numerous transatlantic dance club favourites, – Tony B (LA’s hottest radio dance DJ in the 90’s) the Utah Saints (England’s’ most innovative and popular DJ Duo) & Jason Nevins, (Run DMC remixer of ‘Walk this Way’)

Performing low‐key shows on both sides of the Atlantic, as well as large promoted concerts under her own name & Bow Wow Wow. the new millennium found Annabella also expanding and employing her talents as a songwriter in new commercial, as well as spiritual, directions.
She has worked behind the scenes for global charities like UNICEF and Save the Children Fund, through Buddhist organization SGI. Performed at concerts to help raise funds & bring awareness such as Tsunami, with renowned musicians Dave Navarro (Chilli Peppers,Alice in Chains) & Billy Morrison, (The Cult) for Diabetes, Dog & Cat rescue centers amongst others.

Her ongoing Buddhist practice continues to enhance and inform her artistic sensibilities. The spirit of her songs confirms her ongoing celebration of life through music.