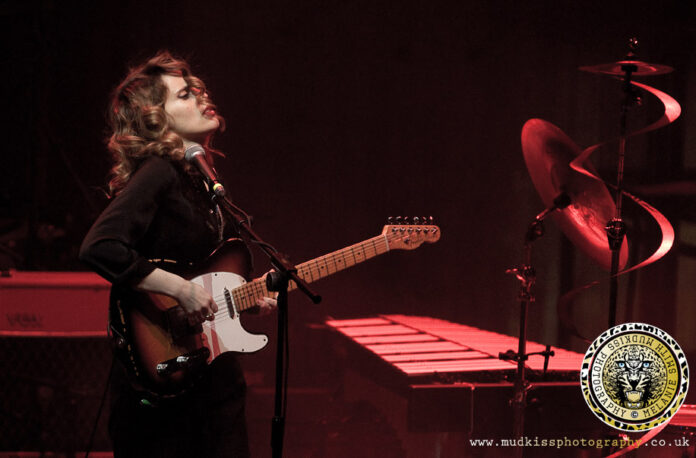 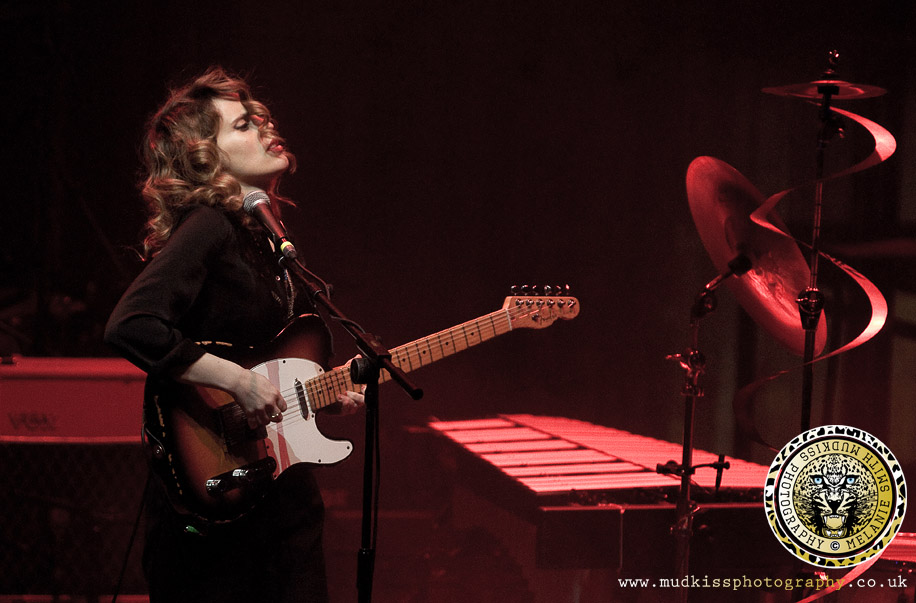 On the back of last years brilliant second album, One Breath, Anna Calvi has been on a tour of the UK during February. Louder Than War’s Melanie Smith was in the audience at the Albert Hall, Manchester – and as usual she took her camera along.

It’s my first time at this venue, which, in a previously life way back in 1910, was a former Methodist Central Hall and is now a Grade II listed building. They have done a fantastic renovation job and the place is ideally suited to someone like Anna Calvi. I first witnessed a performance by Calvi in 2011 at the Manchester Cathedral and that was simply amazing, but tonight’s performance really was something else. 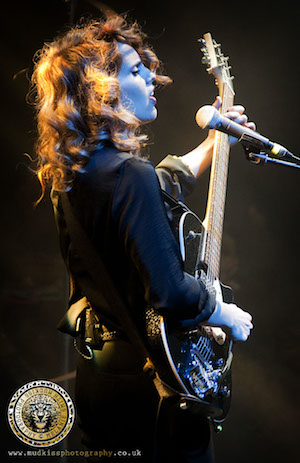 She steps onto the stage, a beauty with dark rimmed kohl eyes, ruby red lips, dressed in a simple black ensamble, golden brown tumbling locks, and the epitome of sultry cool, as the drumming intro begins to one of my favourites tracks ‘Suzanne And I’ (which incidentally Eno sang backing vocals for on her debut album). She sets the tone, and it’s breathtaking; the way she holds herself, the manner in which she sings, with such passion and grace, to her unique expertise on her well worn Fender Telecaster, which is hardly surprising seeing as she is a child prodigy and former guitar teacher. She offers music which has a multitude of strands, which are based around her rich musical heritage and passions; its blues, its flamenco, its rock, its pop, its classical – and it’s incredible.

‘One Breath’ is her long awaited second album. Following on from the 2011 award winning eponymous debut album it was a stunning masterpiece and for which she was nominated for a Mercury Music Prize and BRIT Award. Tonight she performed tracks from both albums, and thankfully not a sound could be heard apart from the purity of the music. It felt like a sexually electrifying experience, and a coming together of like minded souls. The air is tense, and the stage is beaming with pure white beams of light, interspersed with a smoky air of red and blue lighting, which gives it a real sensual, dramatic flavour. She transports us to an unworldly place, full of dark mystery, lust, romance and a real sense of drama and intrigue.

She isn’t one for communicating with the audience, subtle movements are her style, her music and her voice are the only instruments required for the job tonight. When she does speak it is in a kind of low whisper and I can’t quite catch what she says, but apparently she tells us “Oh Manchester, Manchester, you’re the best.”

I stayed right to the very end (I don’t normally when I am photographing) – it almost felt rude to leave and I didn’t want the night to end. She came back for the encore with a very tender slow number, ‘Bleed Into Me’ which is taken from her new album, then she quickly ups the pace with the dramatic and sensual feel of ‘Blackout’ and then the ultimate cover of Edith Piaf’s ‘Jezebel’ , which she makes entirely her own, it was so magnificent that I almost broke down and wept, I could feel the vibrations of the music and the passionate emotions behind the song. I quickly wiped the tear from my eye and braved it out until the last drop of music. As I exited the venue I couldn’t help but feel a touch of sadness, as I know this could be the last time we see Anna in this type of venue again. Tonight I fell under her spell once more, and to say she excelled herself is an understatement….

You can also check out these live videos from the night:

All words and photos by Melanie Smith. More of Melanie’s photos on Louder Than War can be found using the search box above. Her website is here: mudkissphotography.co.uk.