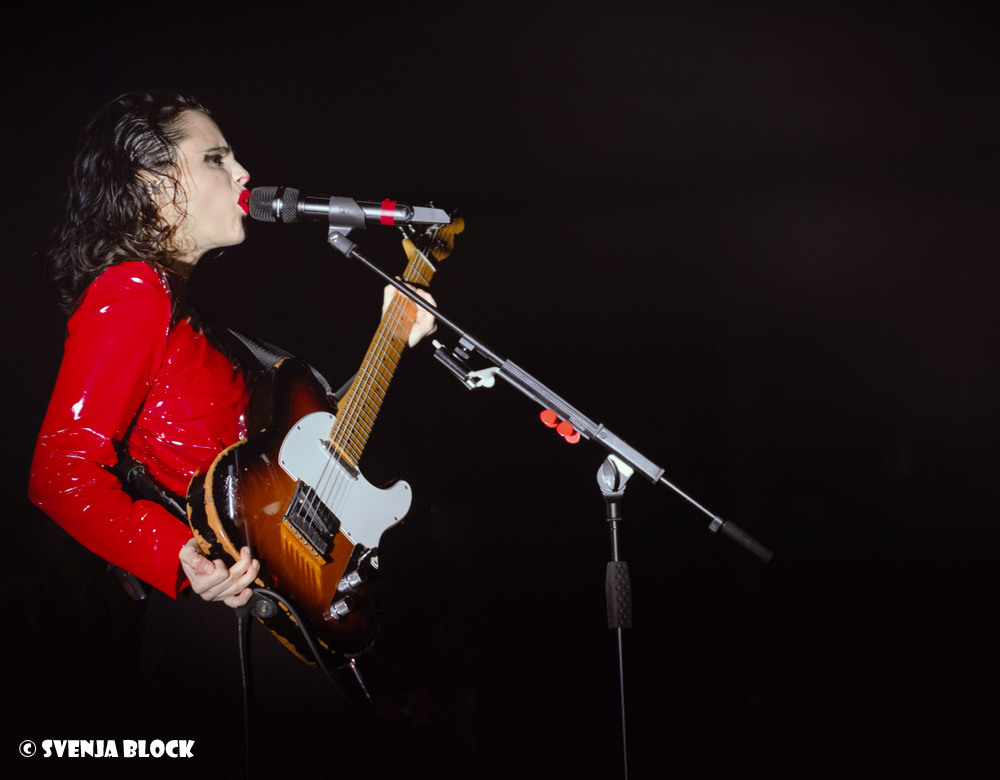 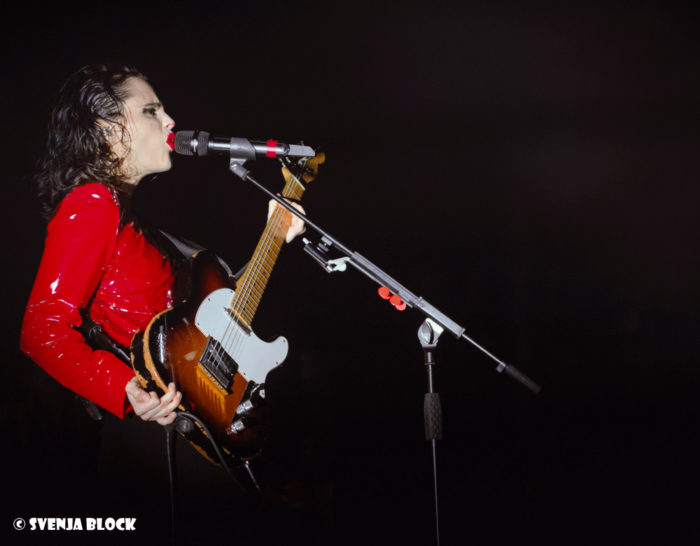 Boy oh boy this was a truly magnificent performance.  A memorable night out that those here will remember for years. There’ll be folk kicking off their shoes at the end of this evening, sitting back staring at the ceiling and soaking up that feeling one can get by considering how fortunate one is to have witnessed such an incredible show such as this. These nights are not to be taken for granted. 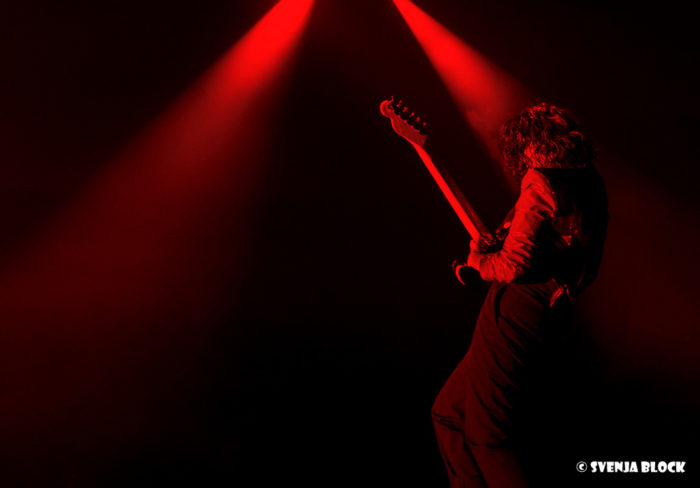 Having no support band tonight was a good idea. Entering the vast arena of the Roundhouse to the subtle beats of the DJ’s chosen allowed those wishing to have a bit of a chat get it out of the way early. Conversations faded out as the volume slowly increased, came to a sudden halt, the light’s went down and the start of the show arrived. Making sure everyone was going to be paying attention from the start had been achieved. Intentional or not, it did the job.

Third album title track Hunter kicked things off and by the time we are four tunes in (Wish) she was amongst the audience, face to face at times. No barriers between her extended stage and punter, 50 shades of red coming from every angle, smoke snapping away at her ankles as she prowled the stage like a wild animal with no fear of the watching throng of people staring at arms length. An audience remaining quiet looking on graciously and learning that to be in charge is to first look like you’re in charge. Head held high, eyes gazing in the distance , no chat, no singalongs or hands in the air moments, just a trio of musicians being loud, proud, intense and compelling. Every tune sung with raw emotion whether its a sweet ballad or a rip roaring heavy track that Sabbath would be proud of.

There was only one person in charge of this room tonight. 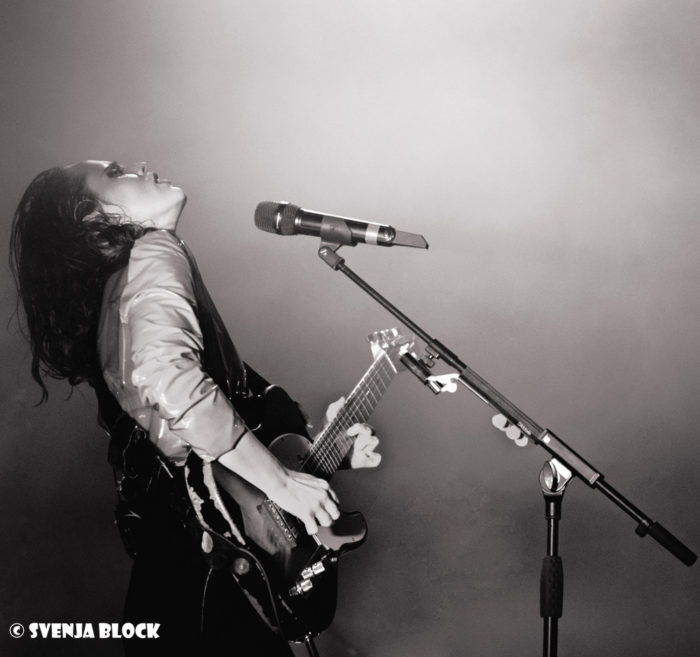 Swimming Pool was performed in silence, I’ll Be Your Man built from a finger tapping intro before busting into an explosion of noise and by the time we get to Don’t Beat The Girl Out Of The Boy we’re realising that we’ve gone this far still marvelling at the voice that must be one of the strongest in the business that she pushes further and further as the evening goes on. A powerful voice that throughout the evening is flawless.

And then there’s the guitar playing.

Whilst all the above is going on she’s shredding her guitar like Hendrix or embracing it like Carlos Santana. Standing with it at arms length over her head and finally wrestling it to the ground as the final song, a cover of Suicides Ghost Rider throbs along and brings the night to a close.

From The Camden Barfly to this in just over eight years (Xposure live for John Kennedy’s Xposure show on XFM – Arrows of Love & Wild Palms book ending the night). She was always going to be this good we hoped and after a few chance meetings at the Summer Festivals she’s now cracked the big venue game. Three fabulous albums, three fabulous musicians (Alex Thomas on drums, Mally Harpaz on additional percussion and keyboards) and tonight, another elegant, almost Prince-like performance that was also aided by a near perfect audience willing to stand and soak all these tunes in across one evening (shame about the phones).

Anna Calvi is at the top of her game at the moment, big festival headliner in the making with a handful of potential James Bond theme tunes up the sleeves of her flamenco outfit.

That fucking good and night to remember for everyone. 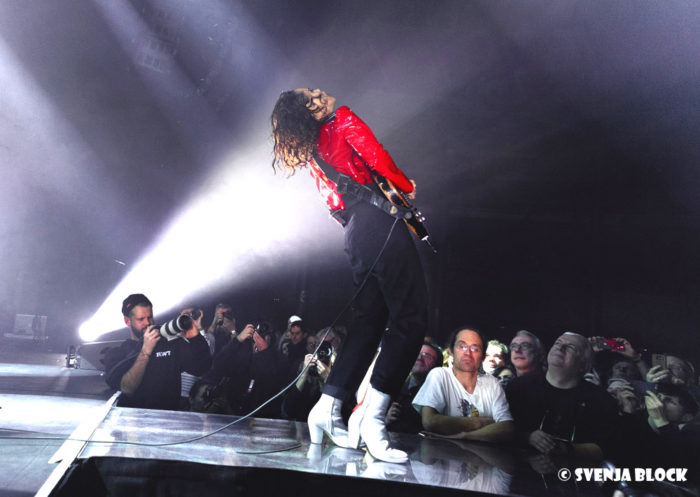 All photographs on this page © Svenja Block. You can find more of Svenja’s work at her Pixieset, Facebook and at her Louder Than War author’s archive.