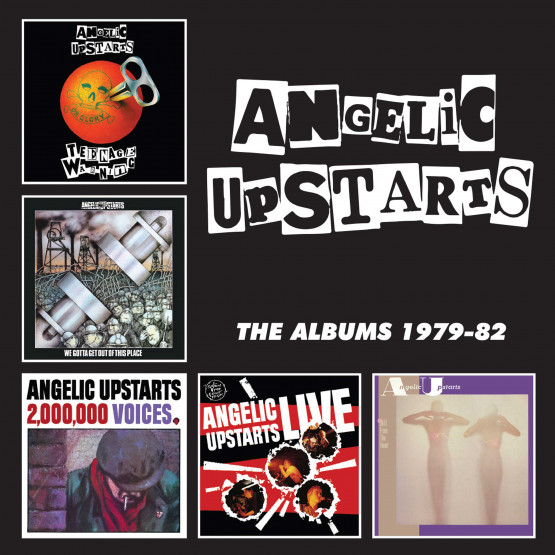 Although viewed as latecomers by the trendies and most of the music press at the time, the Angelic Upstarts were the real thing, fiercely committed to their principles, filled with righteous working-class anger. Not the first Punk band to be spawned by the North East (I think that was the Rebels, who included latter-day Upstart Gaz Stoker), however they did go on to become the best known and in addition had a fair amount of success in the UK charts too. The original line-up came together in 1977, with Raymond (Mond) Cowie on guitar, bassist Steve Forsten, Decca Wade on drums and one Thomas Mensforth (from here on known as Mensi), leading from the front on vocals.

They embarked on a career of getting establishment backs up straight away, with a provocative stage show which brought them the unwanted attentions of the local gendarmes. With their first recording in 1978, the single The Murder Of Liddle Towers/Police Oppression, this intensified. Originally released on Dead Records then reissued by Rough Trade/Small Wonder, the song detailed the suspicious death in police custody of a County Durham electrician, that somehow was ruled “justifiable homicide” by the initial inquest. Coupled with its flipside Police Oppression, it guaranteed that the boys in blue would be keep a firm eye on Mensi & Co. But also, despite the A side being built around a fairly hefty Who cop, the single piqued the interest of Jimmy Pursey, who got their signatures on the dotted line for his JP Productions agency. An effort to sign them to Sham’s label ended after some “high spirits” with Polydor’s security staff, but WEA/Warners stepped in and the Upstarts set about recording their first album.

Teenage Warning, that 1979 debut LP, is a display of pure Punk attitude (even though purists may claim it was two years too late). Just listen to the heads-down blankness of Let’s Speed and their shoutalong version of The Young Ones. Around this time Mensi intelligently debated with Cliff Richard on a TV discussion programme, showing he was far from the uncouth yob the producers of the show probably hoped for. We Are The People showed the direction the band would go in, fusing their palpable anger at the plight of ordinary people with memorable tunes. Closing track Leave Me Alone is a great howl of youthful despair and both the hit singles I’m An Upstart and Teenage Warning are fast, catchy and furious. A great introduction to the early band, with the two Liddle Towers single tracks as bonues.

The follow up, We’ve Gotta Get Out Of This Place, sports a slight lessening of intensity and a few Pop and Pub Rock influences crop up (Ronnie Is A Rocker being chief among the later). Glyn Warren came in on bass, but otherwise it was pretty much business as usual. Out Of Control and Never ‘Ad Nothin’ both coming roaring out of the blocks. The latter has a raging Punk/Metal attack though, it was their last single of the 70s, this record didn’t set the chart aflame but it was a keeper. Shotgun Solution is uncompromising in its assessment of the subject matter and Lonely Man Of Spandau grappled with the thorny problem of Rudolph Hess’ imprisonment. They never backed away from the difficult issue.

King Coal is a sharp sketch inside the mind of a miner, Mensi having done some time himself at “the pit”. Heath’s Lament, a spoken word piece, also deals with the same work situation, but in this case the harsh truths when friends are divided during a strike. The title track re-treads the Animals’ hit of the same name and feels a bit “bolted on” for hit-seeking purposes. Of the two bonus tracks, Unsung Heroes Part II is the pick for me, having some great guitar work on it. All this adds up to not a bad effort at all, perhaps not quite as vital as the debut, but still pretty good.

Not many Punk bands could claim that their third album was their masterwork. Most people tend to regard the debuts as the best, when the vigour was at its freshest, before the bright lights and the big city had worked to seduce bands away from their original impetus. It’s a tight call, but I would say 2,000,000 Voices is overall the best Angelic Upstarts record, full of variety while giving up none of their energy, drive and honesty. The band had exited WEA during 1980, but been thrown a lifeline by EMI/Zonophone, who also had the Cockney Rejects on their books. This potential setback had only served to focus the Upstarts and push them to greater heights. Even the NME liked this album!

It many ways it was the perfect record for the Upstarts and the era. Still retaining the Punk might, but working in Reggae and Folk influences, presenting a band perfectly in tune with the turbulent times of 1981. The patriotic ballad England would prove a bit of a misstep and haunt them for a while, but the intentions were true enough. Much better was Kids On The Street, the jokey folky Mensi’s Marauders and the call-to-arms title track, as the dole queues lines stretched further and further and British industry was emasculated. The album itself ends with the floating, hopeful Folk-tinged I Wish – some nice backing vocals on this too.

Bonuses on this one include the rather harsh Sticks Diary (about Keith “Sticks” Warrington’s love life. He was the band’s drummer for a while, but had moved onto the Rejects by the time of release) and the single take of their brilliant Reggae single I Understand.

The Live album has only been sparingly reissued, so I was pleased to see it included in this set. At the time it was a bit of a stopgap, but actually did very well in the charts, putting the Upstarts back in the Top 30. This is not a high quality sound recording, but does give you a feel of the power of an Angelic Upstarts live show. Featured are a couple of rare “spoken word” offerings Four Words (which works as the intro for Last Night Another Soldier) and Pride Without Prejudice. The version of I Understand from here ended up on the Son Of Oi album a couple of years later. The original Live LP came with a flexi-disc and those four tracks make up the bonuses here, with a spirited take of the Clash’s White Riot being the only one not recorded in the studio beforehand.

The boxset ends with what may still be a jarring note for fans, the 1982 opus Still From The Heart. I’ve got to give the band credit for trying to change and do something different. Also, after three fairly successful albums, by 1982 Punk was a declining force on the charts and I expect EMI were pushing pretty hard for a departure to more “contemporary” sounds and also something which would give the band another hit. Which explains the radical and not entirely successful attempt to take the band in a totally opposite direction to their previous material. Coming after the very strong 2 Millions Voices LP, it felt like a big let-down.

It would be completely disingenuous for me to pretend this was some sort of lost classic, but the fact is it could have been a lot better than it turned out. A lot of the blame for that probably had to do with poor managerial and record company advice, but whoever thought it was a good idea to put Steve Levine in charge of the Upstarts was woefully mistaken. His weedy production techniques gut the band’s natural drive and earthy appeal – what may have worked for Culture Club could not be utilised lock, stock and barrel on Mensi and Co. If they were going to go Electropop it should have been a fast and loud version of it!

There are some good songs on this record though. The extracted single Never Say Die hints at how a better version of the LP could have gone, just about managing to harness some of the old power and spirit with the electronic effects. The Reggae flavour of Flames Of Brixton could have worked with a tougher sound – as it is, it pales in comparison with their previous efforts in the genre. On the bizarre Black Nights Of The 80s they sound like a curious hybrid of the Rubettes and the Residents! It certainly foxed their fans and no-one was truly happy with how things turned out. This did not result in the crossover success the record company had hoped for either, being the first Upstarts album to elude the charts totally.

After the failure of Still From the Heart, the Upstarts returned to the independent sector and recorded the much improved Reason Why album from Anagram. From then on the band have gone through quite a reformations and made records like the fine Sons Of Sparticus. Most recently the Upstarts have released the very good Bullingdon Bastards album for the Boss Tuneage label and remain a formidable live force.

There’s nothing much “new” here for fans: the four studio albums have the same track listings as the Captain Oi! reissues that came out about 15 years back, but it is nice to have them in one block and the live LP is good to have out again too. On the first three albums they barely put a foot wrong, after the debut constantly developing along the way and fleshing out their musical palette with different sounds and ideas to vary things away from the bracing but simple Punk rants that made their name initially, all the while retaining their power. Though coming after the first wave, the Angelic Upstarts were important, providing UK Punk with a conscience when one was sorely needed.