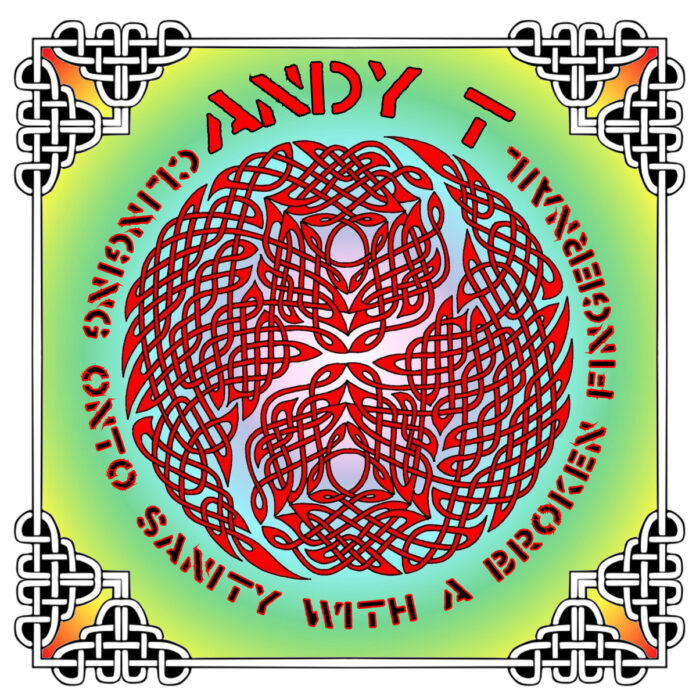 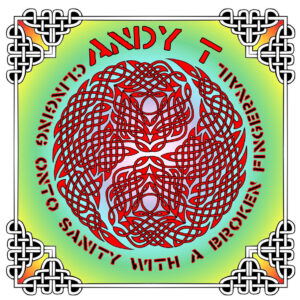 Andy T: Clinging Onto Sanity With A Broken Fingernail

As LKJ is to reggae, so is Andy T to anarcho-punk. He featured on the Crass Bullshit Detector album back in 1980 (both as a solo poet and with the band Reputations In Jeopardy) and is still popping up at anarcho-punk gatherings to this day. Most people in the punk scene won’t need an introduction to him and will know what to expect.

Exasperated at society, Andy T’s performances – whether to a musical backing track or as stand-alone poetry – somehow manage to convey the importance of being a considerate human being whilst being righteously angry at the same time. Seditionary punk rockers are at heart nice people, and Andy is all heart. Andy’s cheeky grin (accompanied by a waggled eyebrow) is often lurking beneath the surface. Whilst he often deals with grim subject matter, he can turn on a sixpence and switch the mood with a choice phrase.

The way this eclectic collection of songs dances through different styles makes listening to the record akin to a meander through a free festival (remember them?). I recognised a few of the songs immediately from Andy T’s live performances.

Bang My Head starts off with a chuggy driving tune and manages to capture how wound up you can become when trying to interact with a call centre. The song takes you from the wind up through to a comedic final verse. I won’t give you a spoiler. It’s all too familiar an experience. “If you want to speak to a human there’s no-one ever there, just pre-recorded messages and a computer’s just don’t care”.

Next up, poem A Room Full Of Friendly Ghosts is a lament to friends who have passed away.  Always a trigger to reflect on your own mortality, and unfortunately it increases with frequency as you age.

Love In A Riot with a front and centre saxophone, choppy twangy guitar and grooving bass lines borrows from the pre-punk alternative scene – the likes of Here and Now and Gong perhaps. The words are very much from the counter-culture, an anarchist falling in love with a cop in the middle of a riot. It’s a break from the ACAB trope.

Fragile Minds paints a grim picture of the concrete walls and chemical cosh of mental hospitals while also laying bare a vivid representation of the mental torment which leads people there. Presumably based on Andy’s own experience of the mental health system which he has spoken about openly for many years, it’s a mid-paced punky tune with a buzzsaw guitar, up-tempo choruses and an air of menace.

Another poem, Scar Tissue, is a touching compassionate verse about self-harm.

The lead saxophone and grooving sounds give an almost jazzy feel to the reggae based Frack On, Frack Off. As the title hints, it’s about the behaviour of cops attacking the successful civil disobedience campaign that followed the enforcement of fracking at Preston New Road after Lancashire told Quadrilla to Frack Off. “The Government decided that fracking will be done. Don’t take any notice of the nasty northern scum. Steam roller over them, smash straight through. The great British bobby will be there to help you”. It asks a crucial question. “Kettling women and children then charge them with assault….who are you protecting who are you working for?”.

Internet Troll uses sound effects, a driving drum beat, roving bass and echoey guitar to create an atmospheric festival vibe. Even when railing against the injustice of internet bullying, Andy manages to inject sufficient humour into his words. He slams down the anonymous attacker to leave this song as vanquisher rather than victim.

Upping the tempo, Mr Normal is a straight-up ska number with some great sax playing. Sid Vicious famously said, “I’ve met the man in the street and he’s a cunt”. While he is far more eloquent and doesn’t need to resort to profanities (on this occasion), Andy clearly has similar thoughts about Mr Normal, the nasty vindictive, Daily Mail-reading, middle-class white man who is everywhere.

Final song The Very Angry Raspberry is a thrashy, high octane rendition of a song formerly recorded by Andy with In Errant for a limited benefit release. The words are franticly crowbarred into half the time in the earlier version. In a narrative about living with a brain injury, it takes the rhyming slang insult and hurls it back out. “They label me a raspberry, they think I’m just a crip. I’m still a human being So please don’t take the rip”.

The record/CD sleeve is a joy in its own right with beautiful artwork by a collection of talented individuals from within Andy’s tribe, which continues into the lyric booklet.

Given Andy T’s popularity and regular appearances, I am sure this release will sell fast. Get yours from Grow Your Own.