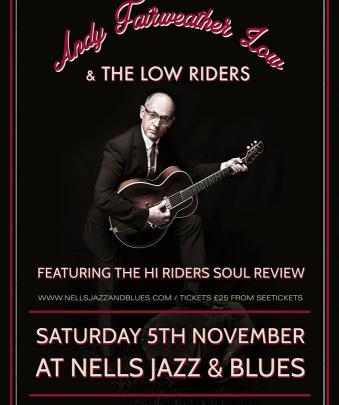 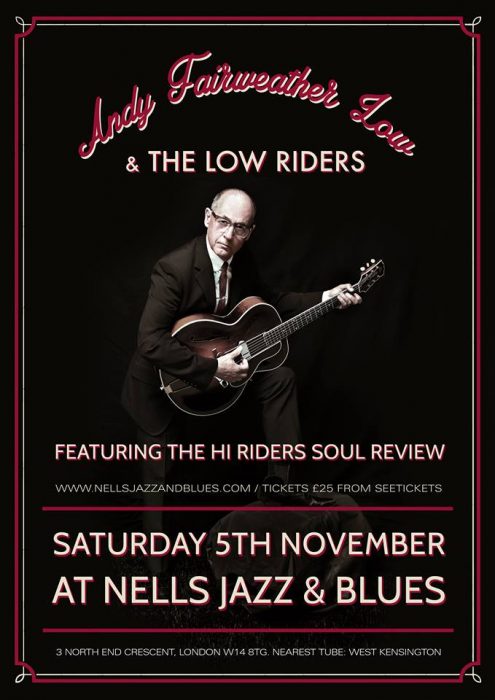 A rare outing for Andy Fairweather and The Low Riders in their big band format. Louder Than War’s Craig Chaligne reviews.

Thanks to the success of their 2015 show at the club, Andy Fairweather Low and The Low Riders were back at the same venue with their regular line-up of Dave Bronze (bass), Nick Pentelow (saxophone, clarinet) and Paul Beavis (drums) augmented by the horn section featured on their excellent live album “Live In Cardiff” and Richard Milner on the organ. Determined to give us value for money, Andy and his cohorts tried to pack as many songs (and musical genres) as possible in their two hour set. Warming up with an instrumental, the band then ploughed straight into the exuberant original “Hard Hat Boogie”. The musical scope covered  was quite impressive, the band jumping with ease from Jimmy Reed’s “Let It Roll” to Ottilie Paterson’s arrangement of “When Things Go Wrong” (featuring Nick Pentelow on clarinette aka “the misery stick”) and also delving deep into AFL’s back catalogue. The title track from 1974’s “Spider Jiving” LP rubbed with numerous extracts from Andy’s latest studio album “Zone-O-Tone” released in 2013. The horn section composed of Nick Pentelow and Peter Cook on saxophones with Matt Winch on trumpet honked with precision on “La La Music” and “Dance On”. Andy’s first band wasn’t forgotten as proved by a high energy version of Amen Corner’s “High In The Sky”. Showcasing their versatility, the band closed off the first set with a great version of a 1959 hit for Chris Barber “Petite Fleur”.

The second half started a breakneck speed with a medley linking “Ride Your Pony”, “Don’t Feel It” and “Fa Fa Fa Sad Song” followed by a powerhouse version of “When A Man Loves a Woman” . We were back in “Zone-O-Tone” territory with the excellent “Blood Toys” and the marching band flavoured tones of “Unclouded Day”. The funky “La Booga Rooga” proved that there is much to rediscover in Andy’s seventies solo albums. The previous week, Andy had taken part in Bill Wyman’s 80th birthday celebrations at the O2. “Route 66” is usually his solo spot when he is playing with The Rhythm Kings which Bill pointed to Bod Geldof who was due to sing the song at the O2 (reply from The Boomtown Rats singer “Well Andy can fuck off”). Closing off in style with three Amen Corner songs (“Bend Me Shape Me”, “Gin House Blues” and “If Paradise is Half Nice”) and what remains his defining solo song : “Wide Eyed and Legless”, the band managed to cram one last song after the curfew (a cover of Mississippi John Hurt’s “I Shall Not Be Moved”).

Andy Fairweather Low and The Low Riders are on Facebook.