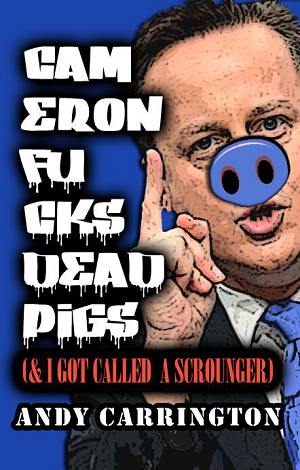 The Bard of Bradford is back and he is still fucking angry in this DIY punk poetry collection.

First off, an apology. A week is a long time in politics and, so it follows, in political poetry too. I’ve been sat on this punk poetry collection from Andy Carrington since July when Cameron had only shortly left office. However, not everything has to be topical, now, instant or Snapchatty to still be relevant. Besides which, the title and cover act as a nice historical marker. As George Orwell famously said “He who controls the past controls the future”. Never forget what Cameron (allegedly) did to that pig’s head – it is one of the finest metaphors for what he and his acolytes did to this country, and are still doing. Besides which, in the world of music the entire 1970s appears to be in the throes of being re-issued, so gissa break!

Those of you familiar with Andy C’s work – from previous volumes such as Anti British Left Commie Traitor Scum, Antifa, The Artist or performances at anti-fascist festivals and punk gigs – will know roughly what to expect. Socio-political, socially responsible and anti-fascist ranting poetry is coupled with personal reflections on life, love and health in a shitty city. This collection of 87 poems is pretty well summed up by the introduction: “Tired of all the cliches: austerity, class division, corrupt policing, poor health care, benefit sanctions, high(er) taxes, road works, lack of affordable homes, evictions, tighter border control, illegal wars….and the Prime Minister getting off on it.”

The poem titles alone make for good reading and produced a wry smile in this reader. For example: “Hipsters Ruin Everything”, “The CHELSEA HEADHUNTERS Just Smashed Up A Coach Full of Russian Schoolkids”, “Pig Fucking Wanker”, written from the point of view of the pig, and “Crap Poets Against How-To-Rape Authors”, in which he gives out the address of the misogynist pro-rape “Roosh V”.

He paints a picture of a shit life living in Northern England in austerity Britain post-2010. Back to Orwell, one of the things that made his portraits of 1930s poverty in “The Road to Wigan Pier” and “Down and Out in Paris and London” was that he went and lived it. Carrington, too is living it. Unlike Orwell, he does not have a journalist’s escape pod back to a comfortable existence. At times the atmosphere becomes very bleak, in fact oppressive. This marks Carrington out as a talented writer – we know about zero hours contracts, food banks, poverty, and the way the benefits system has been turned by the wealthy political elite into a weapon to use against people in need, but he manages to transfer into the written word how that feels and generate similar emotions and responses in the reader. Despair, resentment, anger…. It’s not all doom and gloom though: we are rescued by dark humour or conclusions to these tales when the anger builds and he metaphorically leaps out of the page pointing the finger saying “And you, you cunts, we’re coming after ya”. But do we need to have a happy ending? Isn’t that sugar coated approach to “entertainment” serving as a distraction just one of the problems? Andy C thinks so: “Die MP3 Kids” being another excellent punk rock title to one of his poems. My biggest laugh came from “Horse-Face” which opens with

“No offence to horses
but Katie Hopkins
looks like 1”

Andy C clearly recognises his own building resentment turning to anger. As a man on the edge who may lose it one day he has a smirk in the mirror and compares himself to “Michael Douglas in Falling Down”.

Salient, pithy and perhaps better informed than those in his surroundings who swallow the lies of The Sun and other media outlets propping up the established order, Carrington has a very clear aim at the enemies and causes of poverty, division and hatred. And he is still bewildered as to how people fail to understand the source of their misery falling for the “immigrant” and “benefit scrounger” lies put about by tax-dodging millionaires…..

In The Age of Austerity

then preaching
to us
about spending.

Some of the money from sales of this book is going to anti-fascist causes. To be honest, it sounds like he needs the cash himself, but then isn’t that always the way – those with nothing give and those with too much already just take take take.