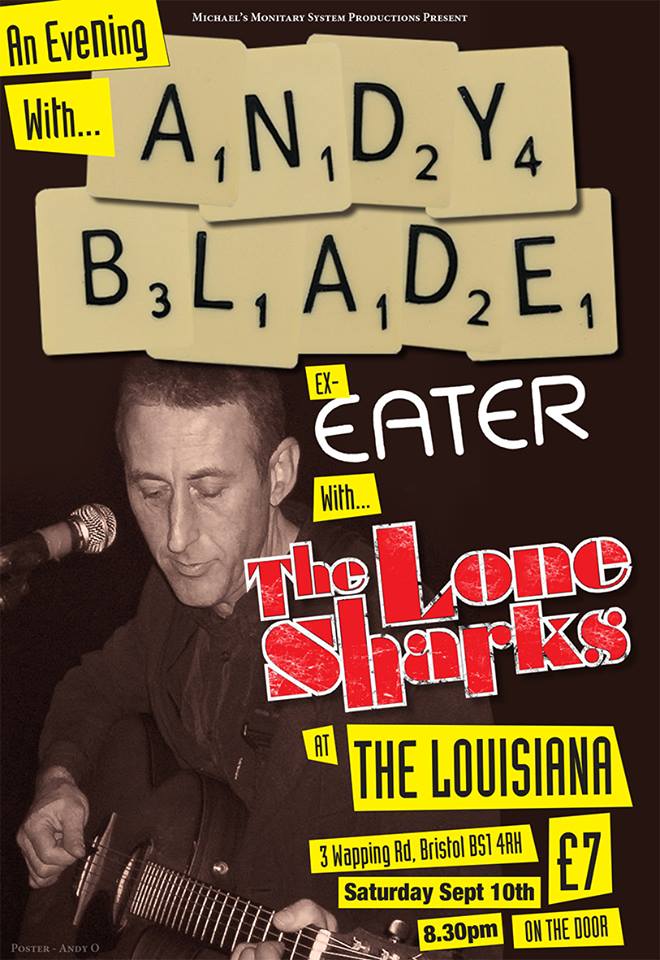 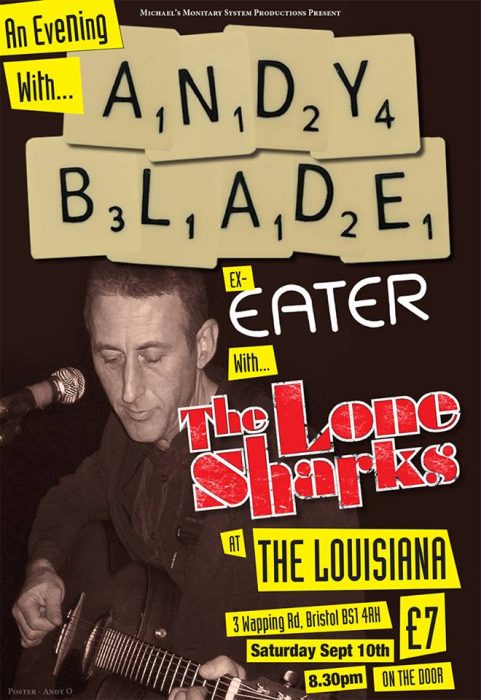 The former Eater frontman and now a reclusive solo artist  plays live at Bristol’s Louisiana this Saturday 10th September with local heroes the Lone Sharks as support.  He is also due to play Glasgow’s New Hellfire Club on 29th October and Manchester’s Night & Day on December 6th (tbc) . The show after that is a very special one, he plans to play a free gig on the Gaza Strip…. Blade told me

I am in the process of arranging (with some logistical support from the British Embassy), a free concert in the Gaza strip in March 2017, as a memorial to my friend who was murdered there. It is also to protest against the likes of { certain contemporaries } playing dates in mainland Israel with no compunction.

Full details when everything is finalized.

Blades forthcoming album ‘Plastic Penny and the Strange Wooden Horse’ is due to come out on Cherry Red soon and features such wonderful titles as ‘Funeral Tips For The Filthy Rich’ , a cover of Frank Zappa’s  ‘Let’s Make The Water Turn Black’ as well as 2016 adaptations of Eater songs ‘Michael’s Monetary System’ and ‘Thinking of The USA’.

The song which may or may not have been about George Osbourne  ‘Snub Nosed Cunt’ doesn’t seem to appear on the track-listing any more, but hopefully is there under a subtler title…

A track from the album called ‘A Lot on My Mind’ was described as ‘the Monkees on chainsaws’ by  none other than Ian Mackaye of Fugazi.

Andys autobiography The Secret Life of a Teenage Punk Rocker: The Andy Blade Chronicles  is being re-published by Cherry Red books ( in time for Xmas) and a new book too “Is coming along so beautifully. It makes Secret Life look like a kids book”.

a word about the Support act…. THE LONE SHARKS
Are the Lone Sharks a Rock’n’Roll band?  A Punk Rock Band? A Post-Punk Band? A Pop Group?  Or maybe some kind of exotic blend of all of the above?  Go and see them and decide for yourself. They mix energy and intelligent melodies creating grown-up songs for all ages.
(on stage by 8.45pm)