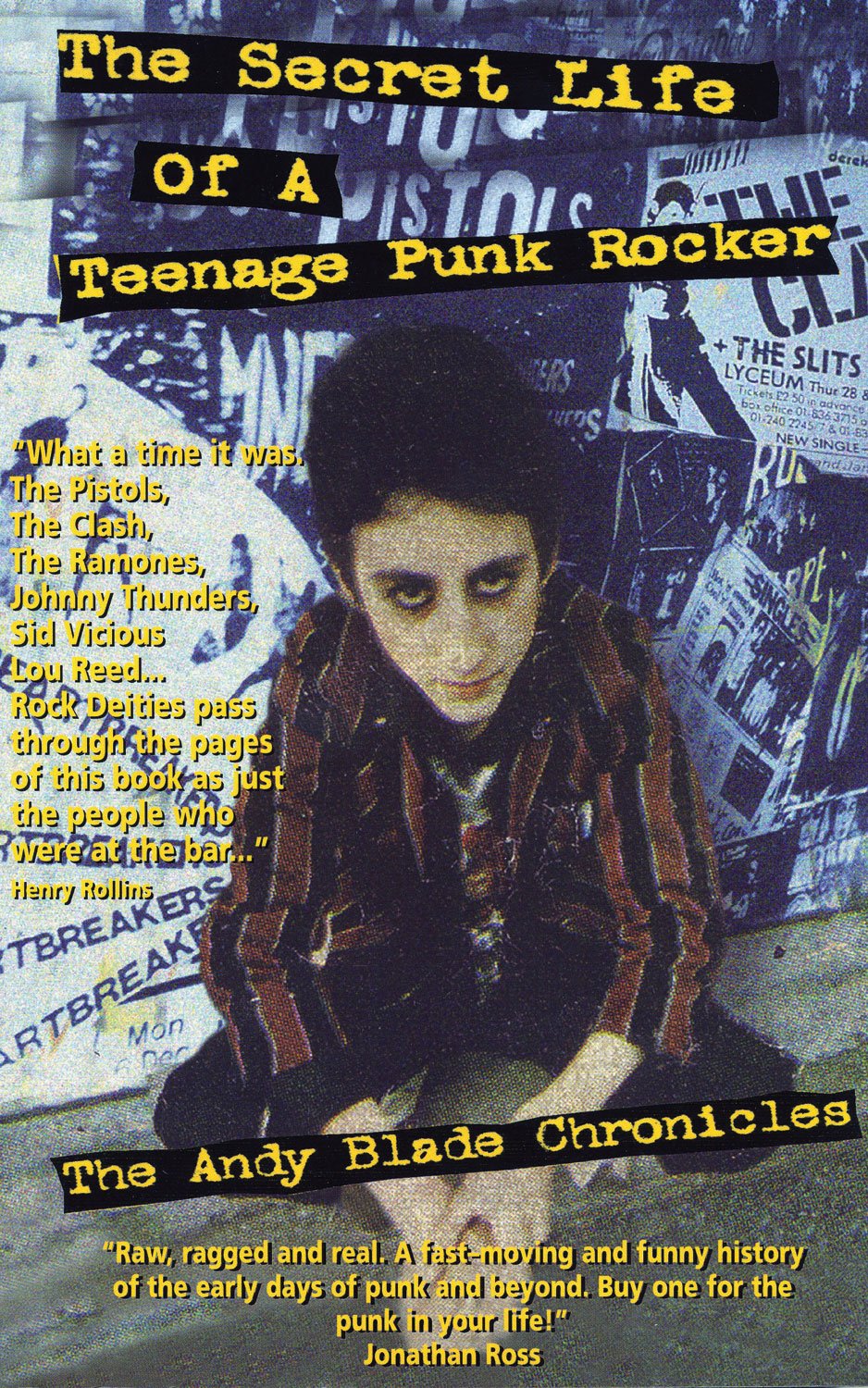 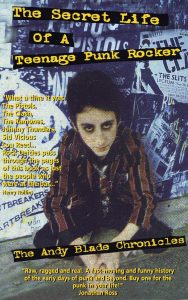 Andy Blade  has turned his autobiography ‘The Secret Life of a Teenage Punk Rocker: The Andy Blade Chronicles’  into a seven and a half hour audiobook.

But first, other news just in…Andy has been Thinking of the USA…

But he doesn’t have a lot of luck – his first ever US tour and festivals dates, set for Sept this year had to be scrapped when the US Embassy refused his application for a Work Permit, supposedly on the grounds he was ‘not famous enough’ -despite the correct documentation and references from J Mascis and Thurston Moore.  After a lot of cussing he told me:

I refuse to do what some of my (equally non-famous) peers tend to do  {Allegedly}  – just turn up as a ‘tourist’ and hope for the best. My lawyers assure me all will be set for 2018. The dates are all being rescheduled and there are plans to go to Australia too.

Andy’s second autobiographical book – provisionally entitled  No Brains – is set for publication in 2018.

I originally started on it a couple years back, to make up for the unavailability of ‘the Secret Life of…’ but it’s taken on a life of its own now. Although rooted in 1977 & Punk Rock, it’s less episodic than ‘Secret Life’ with more of a fast-flowing narrative and the main story line could easily be stand alone, it will shock and surprise even you.

I can remember speaking to Andys brother Hass at the original Book Launch in 2005 and he told me there was absolutely loads of stuff which has been left out… So it’s this is the full, unexpurgated, story?

Yes…the stories I had to leave out are included, including something that happened towards the end of Eater, a big ‘life event’, that I couldn’t fit neatly into the first book …. there’s still not enough room though, and a couple of the ‘new’ sections are so ‘out there’, I keep thinking ‘no one’s will believe this!’

I pushed him for a bit more info but he is keeping it under wraps at the moment, even from trusted journalist associates like myself (the bastard).  He is happy to tell me about his forthcoming musical endeavors though.

‘The Bent Philosophy EP’ is set for a February 2018  release on Flycatcher/Cherry Red, on 7″ transparent vinyl and CD. The lead track is called ‘Victoria Would’  plus three other new songs.  The lead track is…

Easily one of the best things I’ve written – even if slightly long at 3 minutes exactly! What’s it about? Having your drink spiked before going on a date, then having to try and remember what happened the morning after…at the police station. Free line of fake ketamine with every sale.

On sale currently is  The Secret Life of a Teenage Punk Rocker: The Andy Blade Chronicles Audiobook (download/CD – £10/£20  – 6 CD’s, 7.5 hours, full colour sleeve)….. Available only if you order directly from the Andy Blade Facebook page, Andy Blade website or by emailing him.

If that’s too much trouble for you, then you don’t deserve it. Go and buy a Jon Savage book from Waterstones instead.

He added, ever the diplomat and missing his calling in advertising…

If you read the book when it came out at the end of 2005 and loved it, then this will save you the effort and eye-strain of reading it all again and yes, you can just sit back and hear it all from the horses mouth. (Ideal for long journeys or solitary confinement!)

If you’ve never read it, then personally I’d say it’s a must; my favourite book on Punk and its life-changing effects!  So, here is my original unedited 2006 review of the book (which was originally published on Peter Don’t Care’s essential Punkrocker website.)

With a foreword by Henry Rollins, a cover endorsement by Jonathan Ross, and great, previously unseen photos, this is arguably the very best inside account of Punk Rock in London 1976, ’77, and far from being just the story of school-kid punk band Eater. ‘The Sid and John Stories are worth the price of admission alone’, says Henry, and if you want to know which member of the Clash had the biggest dick, then you’ll find out from these hilariously, frank chronicles. Of all the books on punk, this is destined to be the peoples favourite, as it is the most intimate, personal, cutting and basically the most honest. It’s how one person saw it, felt it, and lived it. The fact he was a naieve 15 year old at the time helps immensely as the whirlwind journey of discovery is recalled with amazing clarity. He can spin a yarn too and he doesn’t hold back on all the gory details. Being on the receiving end of a washing up liquid bottle full of piss being used a water pistol, by a Sex Pistol after being caught in bed with said Pistols girlfriend is a particular highlight.

There’s a lot more to this book though. It is about being an outsider as a child in the 70’s, Blades parents divorce resulted in school-phobia and he withdrew into the fantasy world of pop music.  His ‘secret life’ was as much about being a fan initially as it was being a performer, see the segment on how he stalked the Runaways, issuing fake bomb threats to the hotel they were staying in, hoping they would emerge, semi-clad or otherwise. You really get inside Blades head reading this intense, dramatic yet funny book and get to understand how shy school kid Ashruf Radwan transmogrified into teenage ‘low-rent rock star’Andy Blade, and, having burnt out before his 18th birthday descended into his ‘drug hell’ and made it through the other side.

Instead of chronological history, boring statistics, exact dates and details of recording sessions, socio-political theory or analysis you get stories of encounters with a bizarre cast of supporting characters; an armed and dangerous Spike Milligan, a surly Bob Dylan, a polite Lou Reed, a shambling Muhammad Ali, a self-righteous Cat Stevens, a confused Bay City Roller, a self-important Mickie Most and needless to say Rotten, Strummer, Scabies, Weller et al. On top of that you get a true ghost story, sections on Islam (his brothers became converts), a cold turkey travelogue (Egypt & Israel where he went to get cleaned-up), and a guide to how transcendental meditation can help you win on the horses.

A fantastic read and a must-have for anyone interested in punk.

And now a brilliant audiobook