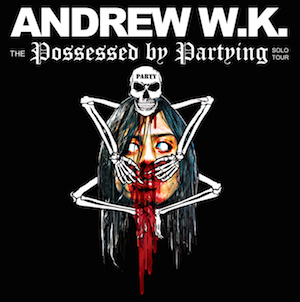 “Well, if you don’t like that, you’re a miserable get.”

Mark Radcliffe on BBC Radio 1 in 2001 after playing his single of the week, Party Hard by Andrew WK.

It’s an impossibility to argue with true wisdom and on the subject of Party Hard Mr Radcliffe was spot on.

Andrew WK burst on to the scene in 2001 with his debut album I Get Wet and with a great amount of hype from the NME who put him on the cover twice in the same issue and gave him the prestigious headline spot on the NME tour that also featured The Coral, Black Rebel Motorcycle Club and Lostprophets.

I got to the Leeds and Manchester dates of that tour and there was no doubt at all, Andrew WK was a phenomenal force in a live situation.

After a couple of UK festival appearances, he seemed to vanish off the radar as far as this country is concerned but was always remembered with fondness.

It turns out in his absence from these shores he’s been far from inactive and as well as continuing with his music career, he’s also a self help and motivational performer, writer, nightclub and live music venue owner, record label owner and appears regularly on several TV shows.

So when I heard his Possessed By Partying solo tour would be calling at Leeds, I decided to go along and check things out.

I was at first quite sceptical when I found out this tour would involve nothing more than Andrew WK, a keyboard and a drum machine. How was this going to work when the last few times I’d seen him was with a full band? I was even more concerned when the venue was moved from The Cockpit to somewhere I’d never even heard of in Leeds, The Wardrobe.

Anyway, due to roadworks in York and the Leeds inner ringroad, we sadly missed all but the last few seconds of the support act, Chris Catalyst (Eureka Machines, Ginger Wildheart Band, Sisters Of Mercy) who was doing an acoustic set, finishing off by playing a cover of Take on Me by Aha to a rather large and rowdy bunch that were gathered in front of the stage.

The venue was pretty packed and there was certainly an atmosphere of good natured expectancy in the room. The crowd was a diverse gathering, everyone from grizzled Metalheads, a smattering of Goths and even a large contingent of bearded Hipster types.

Eventually, the intro tape rolled, I guess it was some of the motivational stuff WK has been doing. Anyway, it had the desired effect and by the end of it, the entire room had raised it’s arms and was chanting TONIGHT WE PARTY! in an almost religious frenzy. A bald dude in a vest appeared on stage to hype things even more and then, looking exactly the same as he did at the turn of the millennium, clad in grubby white jeans and t shirt, Andrew WK walked on stage with a beaming grin and started to pound the shit out of his keyboard, the drum machine kicked in and the familiar sound of It’s Time To Party blasted out.

I honestly can’t remember a gig where the crowd went so ballistic from the very start, no getting warmed up or waiting for the hits, total and utter mayhem from the outset and not a hint of aggression or attitude. The pit just got wilder as the night went on and the two shaven headed security lads on opposite sides of the stage were looking more than a tad concerned by the events under their noses.

My initial scepticism was completely unfounded and this was turning out to be every bit as good as I remember the full band gigs been. The vest wearing bald dude (Blakey Boy as Andrew introduced him) remained on stage, sharing vocals and generally stirring up more carnage. By the time they played Ready To Die I found myself been slowly drawn ever closer to the sea of grinning faces, gleefully killing each other in the nicest way possible down at the front.

This was turning into a something quite spectacular, the atmosphere was nothing short of euphoric and I doubt there was anyone present who wasn’t having the time of their lives.

When WK introduced You Will Always Remember This Night, I genuinely believed him and started to wonder how madder this gig could get when the first wave of crowd surfers flew over my head and were deposited on stage only to be picked up and hugged by WK Security looking on, far from impressed.

Then came the words that sent something already insane into complete meltdown. “When it’s time to party, we will party hard”.

Suddenly, I was at the front, having an absolute blast. Never before have I seen a group of people try and form a human pyramid in the centre of a circle pit, no mean feat given the size of the room. The crowdsurfing became an epidemic and before long more than half of the crowd had swamped the stage in joyous raptures. The security battling to restore some semblance of order were involved in an act of futility.

I’m not sure if Party Hard was supposed to have been the set closer or the venue pulled the plug in the face of such crowd madness but Andrew WK shouted something I didn’t make out and left the stage to a chant of “We Want Fun!”, sadly, no encore and the house lights came up.

Waiting at the side of the room for my companion of the evening who had vanished, I ended up talking to several complete strangers about everything from Wildhearts tattoos, the similarities between Chester and York and my Kvelertak t shirt. It seemed like everyone in the room was part of some huge communal thing and everyone was a friend. Gigs are always communal things but this level of friendliness was previously unseen by me. As we spilled out on to the street, the party didn’t seem to be ending and new found best friends disappeared off into the Leeds night in search of more fun.

As far as sheer, unadulterated good times go, that was THE gig. No attitude, no holier than thou scenesters, just a room full of people going absolutely mental to a thoroughly uplifting and righteous racket. What more could you possibly want?