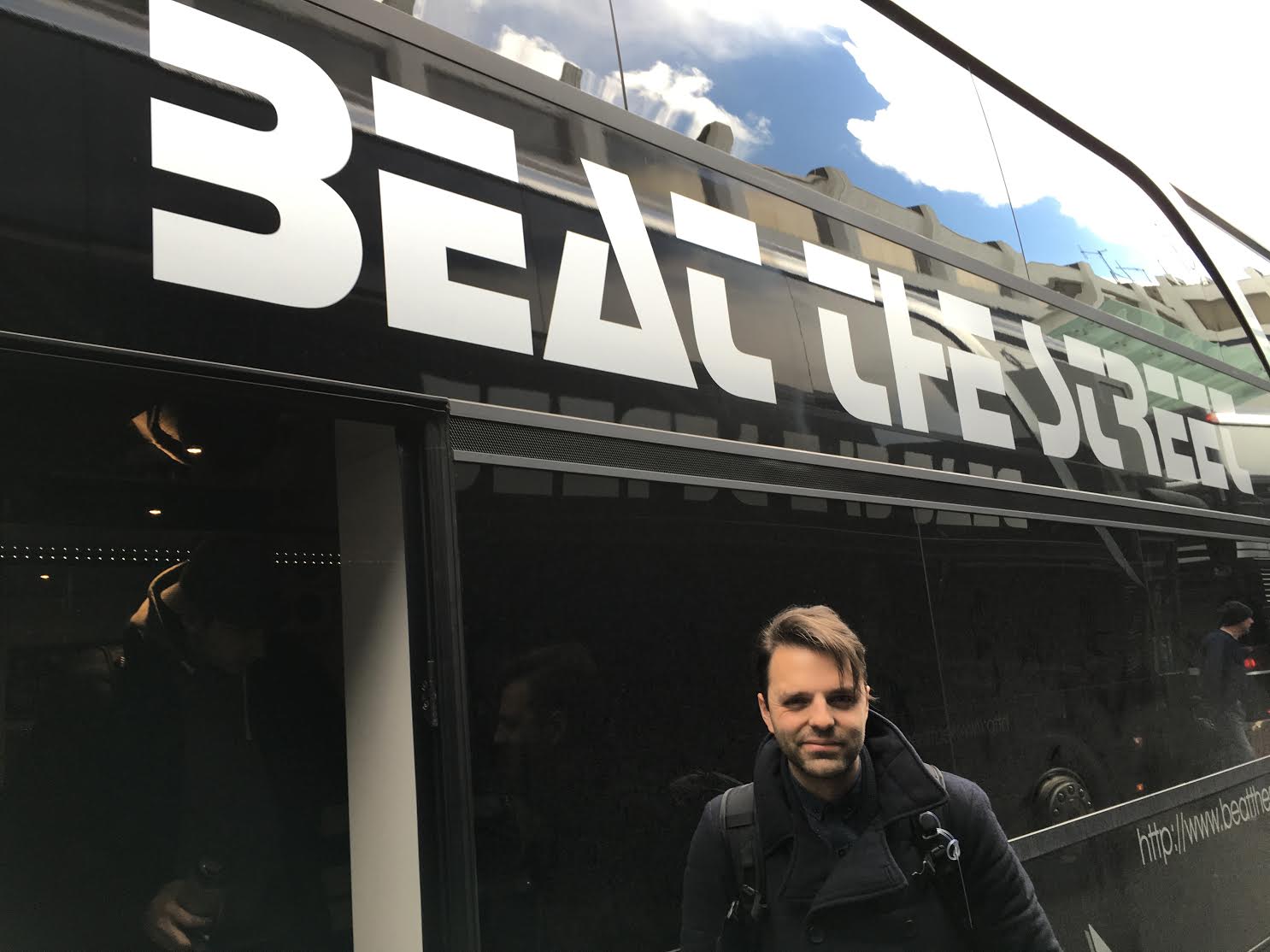 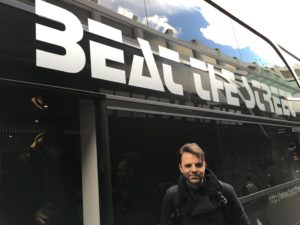 Writer, composer, producer and violinist Andrew Joslyn has just completed a major tour with no less than hip-hop sensations Macklemore and Ryan Lewis.  In the first article Joslyn revealed how he had contracted shingles early in the tour and was suffering feelings of isolation as he was segregated from the rest of the crew.

Thankfully Andrew Joslyn recovered from his debilitating bout of shingles and was able to continue as the orchestral leader on the Macklemore and Ryan Lewis tour.  As we catch up with Andrew in Munich he may be feeling better physically but the stresses of enduring life on the road with one band whilst working to release an album of your own are all too apparent.  Joslyn is in a reflective mood as he spends some time in Germany.

“The spired skyline is bare of ugly skyscrapers, or any overtly modern architecture, and it’s wonderful to behold. I’m downtown in the Marienplatz, and just taking a moment to appreciate the life that I’m living on the road.  It is an incredible feeling to realize that your choices in life can bring you to any given moment… and realizing that chasing my life as a musician brought me here is almost overwhelming.  My life as a musician has allowed me to see the world.” 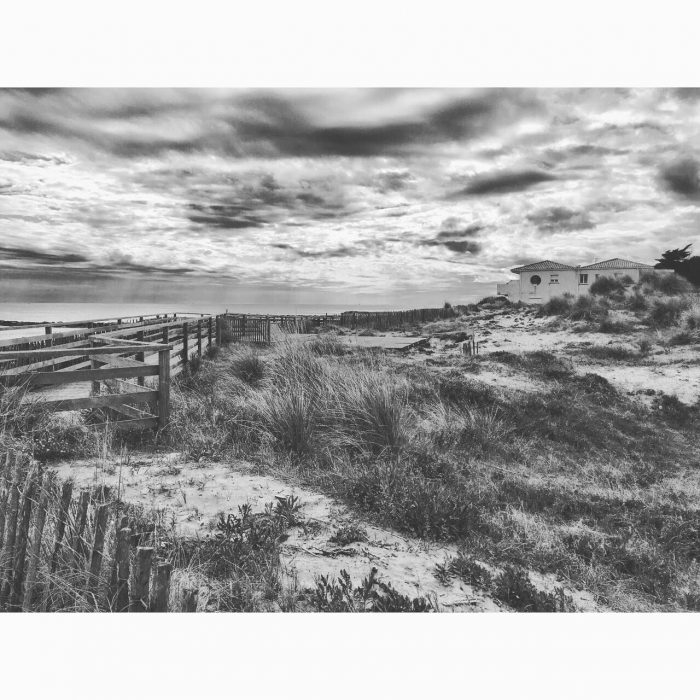 As you read you have a sense of Joslyn overcoming his angst to a degree, he is enjoying seeing new places, he is appreciating the opportunities that being a musician has afforded him.  Yet beyond that you can almost feel the fear and the pain that many artists experience when they come to share their music with the world.

“When you write a musical album, it is a self-auditing process, where you are continually challenging yourself if a lyric, a musical phrase, a chord progression, or even an instrument choice is good enough.  Once you get into the mixing, editing, comping, and mastering phase… you are criticizing every pause, every high hat hit, every wave form, and more.  In the end you know your own art so well, that it’s painful.  You know its short comings, and you know its strengths… but you also tire of it all, and that is the most frightening aspect. I applaud any musician that gets to the end of the process of making an album, and still has the raw belief that their music is powerful enough that other people will want to hear it.”

It is probably fair to say that Andrew’s experience around the release of Macklemore and Ryan Lewis’s This Unruly Mess I’ve Made is at least partially playing on his fears.  In Joslyn’s view the album was creative, well made and ambitious and yet it was judged “incredibly harshly” in the USA.

“[The album] is masterful and ambitious, and I’m proud of it. However, people are going to think what they want to think. I feel like US audiences were ready to hate it no matter what. The music industry is a heart breaker.

“I’m scared to release my album, and I can’t pretend that hearing negativity about it won’t hurt me deeply. All artists are uniformly sensitive, and most of us are probably just really good at faking and hiding that humanity.”

Andrew reflects on a comment made by David Bazan as he toured with him. Bazan claims that “all artist’s need to have their hearts broken by the music industry. Whilst not necessarily disagreeing Joslyn says “I just don’t know if I’m ready to have my heart broken yet.” 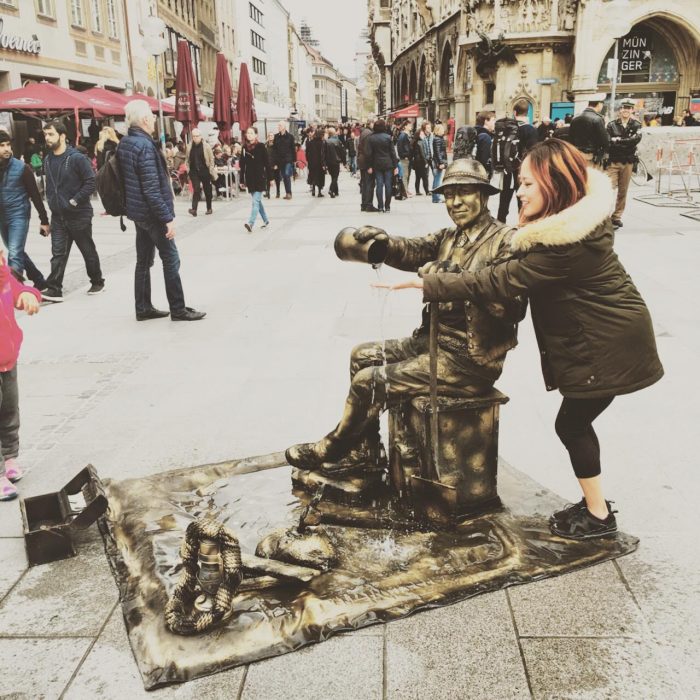 As the tour heads towards Montpellier you get the sense that Joslyn is really hitting his stride, settling into the pace and structure of a major tour as no fewer than eight tour buses and a host of equipment rolls through the French countryside.  Andrew revels in the fact that things can and do go wrong on tour but it is those moments that are the most real.

“Weirdly enough, I actually really like it when things go wrong on stage. These moments are the most memorable, and the best to recount as war stories later on, but they are simply the most human and real. What I like about stage mishaps is that it’s a confirmation that we can get by if we make a mistake, and it’s not the end of the world, it’s only human.”

“This tour in comparison to the Heist World Tour two years ago is significantly more polished, prepared and relaxed – however everything is to a grid. There are click tracks (constant quantized beat) for everything happening on stage, and everyone in the production is syncing up to this. The giant LED wall, the pyrotechnics, the lights, the performers, the moving stage, and everything else is based on this strict timing. There is a small margin for error and flexibility… but not much.”

As the tour rounds off in Europe Joslyn finds himself back in the UK for shows in Belfast and London.  As he begins to look forward to his return home to the USA Andrew reflects on the mayhem that celebrity brings.  We live in an “attention economy” he argues.  Macklemore and Ryan Lewis are constantly followed by photographers, videographers and fans wielding smartphones.

“Their private and public lives are always being covered and recorded.  Every moment, every selfie, every tweet is scrutinized to be perfect, provocative, shareable, and interesting.  But for them it is a business, and for a lot of artists, mastering the art of social media is an important part of their brand and business. But when is sharing someone’s private life over sharing, narcissistic, or voyeuristic?”

We use social media to grab attention he claims but he is honest enough to admit that what the public see is carefully managed. It is edited to leave out the mundane, the ugly moments, the fear and angst.

“We sit on social media most of the time, hoping to see more likes, or more people following us. Trying to post glamorized pictures of our lives on the road. I’m guilty of this as well. I want more validation, and people commenting on my curated life.”

As Andrew notes the growth of social media is a mixed blessing for celebrities.  It is a necessary part of any successful business plan but in a 24/7 world that success comes at a cost.  Information goes worldwide at the click of a button and that can lead to intrusion from both media and fans.  Superfans have the means in their pockets to stalk their favourite celebrities and to be consumed by their passion.  It is exciting and colourful whilst at the same time being claustrophobic,  ludicrous and fake.

Whilst admitting that he wants some of that fame and the celebrity lifestyle for himself Joslyn leaves us with an observation on celebrity.

“[Macklemore and Ryan Lewis’] lives now are not entirely their own… they are the property of their adoring fans, the media, and the world. We all live in this crazy world – but at least now we can photoshop out the bland and mundane looking parts.”

It has been fascinating to read Andrew Joslyn’s tour diary.  Andrew makes it clear that life on the road can be a struggle, especially when you are far from home and need a little support.  Like any career it is clear that in Joslyn’s experience life on the road provides amazing high’s interspersed with boredom, angst and self doubt.  We here at Louder Than War would like to thank Andrew for sharing his thoughts with us, I hope we have done them justice.  We wish Andrew every success with his forthcoming album.