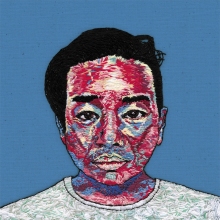 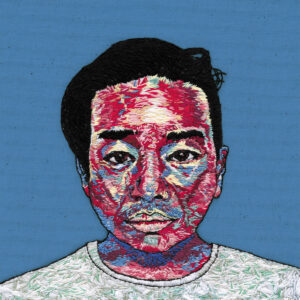 With his bandmate Benjamin John Power aka Blanck Mass, Fuck Buttons’ Andrew Hung has created some of the most extraordinary electronic music of the last decade, including having two pieces used in the 2012 London Olympics opening ceremony. Recently, Hung co-wrote and produced Beth Orton’s acclaimed album Kidsticks (our review of which can be found here) and it is this album that Realisationship most resembles. Gone are the acidic beats and barbed wire synths, instead replaced by a lo-fi, garage-based sound.

Realisationship is an album full of dualities. There’s conflict everywhere, whether that between two people, one person versus the world or between the two aspects of one person’s character. Rage and bitterness rule on some songs (No I Won’t, Animal) whilst sorrow and acceptance reign on others (Whispers, Open Your Eyes). Sonically the album may be lo-fi in feel, but on further inspection, it is a dense and rich work with hidden layers appearing over time. The synths remain but this time they sound like instruments near the end of their life getting one last album squeezed out of them by an artist desperate to get this music out of his system. There is no bombast here, just finely textured and well-crafted songs that incorporate ska, hip-hop, and the DIY electronica Hung so wonderfully crafted for his soundtrack to the cult classic The Greasy Strangler. It’s a musical palette that makes you feel, like punk and post-punk music did, that you can achieve this sound even without a wealth of musical talent. This is, in fact, the albums strongest point as only someone so gifted can make an album at first appear stripped back and simplistic yet on further investigation is a work that is highly musical and crafted with an intense level of skillfulness and creative talent.

There are moments on Realisationship where you are hearing music that is actually pop in spirit, whether that be on the electro-sleaze of No I Won’t, which sounds like a 2017 UK basement take on Madonna’s Like A Virgin, or Private Commercial which marries the proto-funk of Iggy’s The Idiot with the early days of UK synth-pop. It is the latter genre which seems to emerge the most throughout Realisationship’s songs and even though that may come as a surprise, it works wonderfully well as it manages to update a genre that, when originally created, was also full on DIY in approach and style and one which released some of the most subversive pop music ever created.

Forgoing the usual trope of guest vocalists, Realisationship features Hung himself on vocal duties. Admitting that gaining the confidence to do this was the hardest part of the album, Hung’s vocals add an extra charm to the album as his voice is the sound of someone really pushing themselves. Hung’s voice is laconic and has a certain drawl to it that reminds of singers like Pete Doherty and even Damon Albarn, but its brittle nature and the fact it isn’t polished or what many would deem powerful, aids the lyrical themes and gives the album a beating, human heart.

Realisationship is an enjoyable and interesting album. Its theme of duality and its kitchen-sink charm make it an album that is identifiable and charismatic. It perfectly encapsulates the general feelings of today and for all the electronic instrumentation it is Hung himself, the human heart, that shines the brightest.

Andrew Hung can be found via the Lex Records website or via Twitter where he tweets as @ndrewhung.