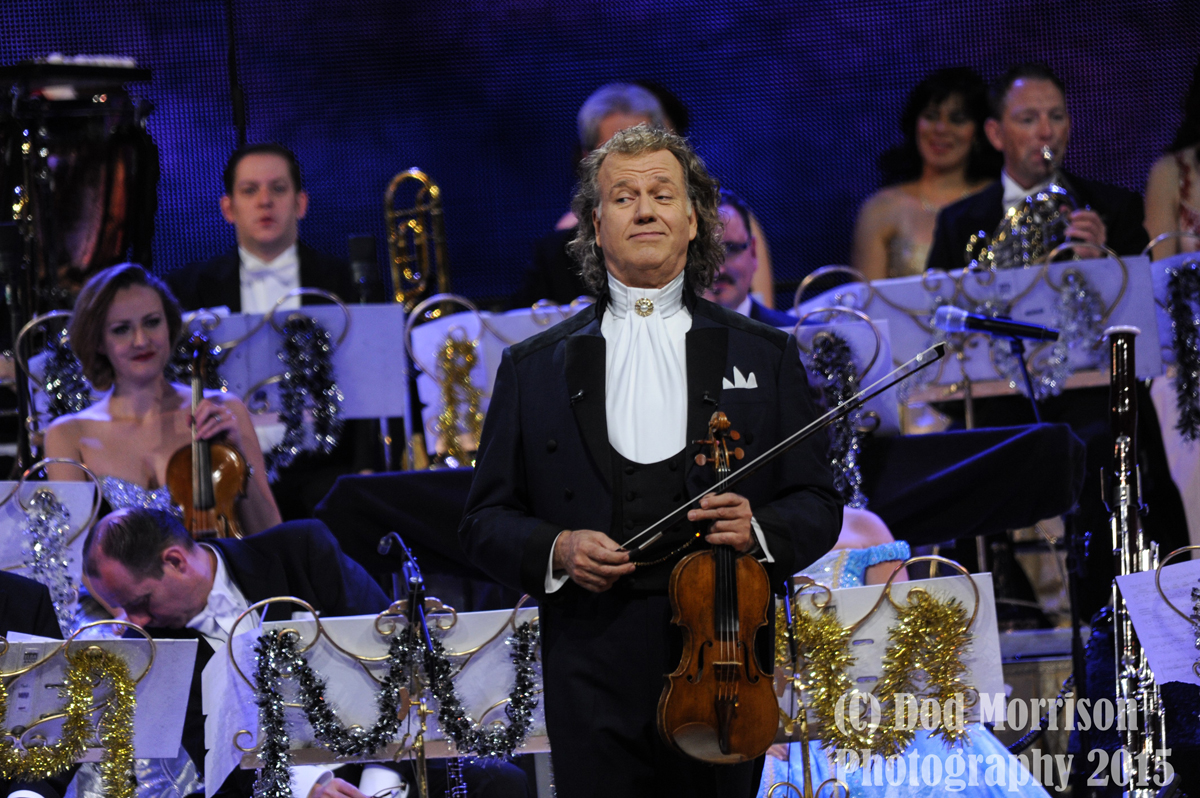 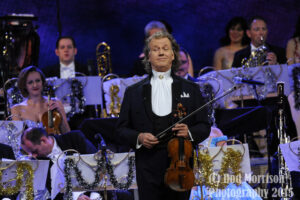 As I wait for the Andre Rieu to arrive on stage I look at the well lit up stage, with loads of chairs for the orchestra and think to myself, how will this go as I never been to an orchestra show before… standing near the mixing desk where we are positioned for photos tonight, I see Andre lurking at the back of the crowd, with his entire band and then as the lights dim, they all walk through the crowd to the stage, they are dressed in tuxedos and ball gowns of all different colours that wouldn’t look out of place in a Disney movie.

The Maestro, stands centre stage playing his 1667 Stradivarius violin while the Johann Strauss orchestra take their seats, together they have turned classical music and waltz music into a worldwide touring act; He addresses the audience, saying “it is my first time in Aberdeen , we arrived off the plane today to Scottish weather, which was indeed a very windy day, tonight we are going to warm your hearts with music”

And they did, with a big screen behind them that played animation and stills, which included some photos of Aberdeen landmarks which drew a big cheer from the crowd.
The night is filled with waltzes, popular music and some great camaraderie between Andre and his orchestra, like one Christmas number they all put on Santa hats and when he faces the audience they all throw them up in the air and catch them before he turns back to face them, this goes on a couple of times before he catches them, and tuts “kids Huh” all well timed and panto like but this is the time of year to do it.

He regales us with tales of the history of the orchestra which originally started with 12 members, that they play all over the world and bring happiness to people and they do , the age limit here tonight was from about 8 years to very mature..

They play for 2 hours 45 minutes with only a 10 minute break, the show has everything, the Platin Tenors, 3 guys with great voices do a couple of numbers, fake snow falls over the crowd, balloons come down, the Blue Danube waltz has couples young and old dancing up and down the aisles.

But highlight for me was when he played his violin to amazing grace and one of the orchestra played the bag pipes along with it..

You can see why the Dutch king of waltz has reportedly sold over 32 million CDs and DVDs worldwide and been awarded 330 platinum and 100 gold awards..