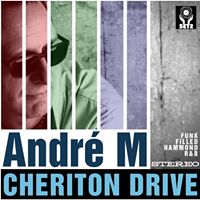 It’s summer in the UK; the sun shines while the streets brim with lively mini-skirted girls and sharp-dressed boys. This may be a factually correct picture of many British streets right now, but more specifically it’s true of the evocative world created by the talented Andre M and his debut album Cheriton Drive. It is a fantastically self-assured record, full of Hammond-based rhythm’n’blues in the vein of Booker T and the MG’s and The Bar-keys. Opener Cheeky Face sets the tone perfectly, aptly titled with its playfully insouciant tone. It channels the way the aforementioned Stax acts managed to combine a free-spirited sense of doing whatever they wanted with tight musicianship.

Whereas that sound grew out of a segregated Memphis, building unity through music in the late 1950s, Andre M’s sound comes from a little closer to home, it being the musical guise of Andy Portas, a Derbyshire-based bass player. He has spent years playing in a head-spinningly broad range of bands and has all the technical background you would expect of such of a tight sound. However, this kind of prowess never comes at the expense of a kind of raw purity that harks back to a time in which music felt ‘real’, with a sense of connection between everyone playing on the record. Portas bass style – very much in the Duck Dunnesque tradition – is exemplary, but is further complemented by his band. The Selecter’s Lee Horsely provides the Hammond organ which is key to the whole sound and underpins the retro feel throughout, whereas the guitar work from Portas’ long-time collaborater Andy Moore is perfectly nuanced. The production – also carried out by Portas – is just minimal enough.

The whole effect is something which feels very much like ‘an album’, rather than just a list of tracks, as it all blends and melts together perfectly. Even as it shifts in feel throughout, such as on the slightly more psychedelic, paisly-tinged edge of Back Cycle or on the title track Cheriton Drive, evoking a British take on the Memphis soul style sound, even taking its title from a Derbyshire street. As the likes of Dr.Feelgood took American R’n’B and anglicised it with British themes, Andre M has managed to do very much the same thing with this album in general, proof that you don’t need lyrics to be evocative. The Hammond-fuelled sounds alone conjures up all the necessary images, like a soundtrack to a retro film not yet made. Listening to this record is Carnaby Street in its heyday; it’s Aquaschtum trench coats; it’s David Hemmings writhing around on top of Verushcka in the opening scene of Blow Up. It still manages to feel fresh and never takes its eye away from musical developments. Evocative, multi-layered but above all deliciously danceable, Cheriton Drive deserves the soundtrack to many a modernist club night and summer afternoon.

Cheriton Drive is out now on Set 2 records.

All words by Amy Britton. More can be found at her Louder Than War archive  or via twitter where she tweets as @amyjaybritton.