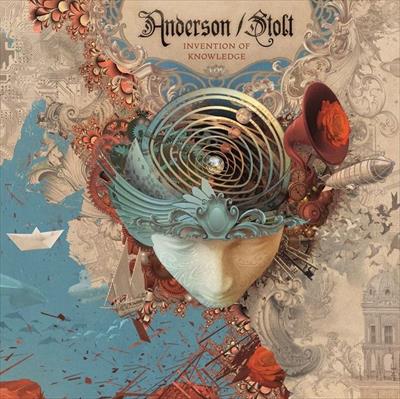 For the record, Anderson / Stolt –  that’s Jon Anderson long standing singer although not currently an active member of  Yes and Roine Stolt, guitarist in The Flower Kings and member of numerous progressive rock themed bands, most notably the  transatlantic prog supergroup…Transatlantic. Their new joint undertaking, ‘Invention Of Knowledge’ seeks to expand even their own seemingly limitless boundaries.

For many it’s a match made in heaven. Especially when you hear the pair  talk of creating music in the mould of some of the ambitious and groundbreaking Yes music of the seventies. The Anderson / Stolt  match initially suggested by Inside Out’s Tomas Waber, not someone who’s shy about coming forward  when it comes to spotting opportunities for developing quality progressive music. Seeing how  the album comprises  four lengthy tracks, ‘Invention Of Knowledge’ is a genuinely  mouthwatering prospect for those who carry a flame for those hazy days of yore when progressive rock music stood proud and ruled the earth.  Get ready then for not a set of songs, but an experience.

Housed in  cover art which shows  the contents of a mind, the knowledge,  spilling out into a journey of discovery, you may even have plonked your red or blue vinyl onto the turntable and have barely had time to draw breath before Jon’s casting his mystical spell.  Within a minute  of the opening ‘Invention’       he’s singing of  sunlight, moonlight, stars and space and how “no-one would bless the moonlight for being too late” – Anderson watchers will be in their element.    All accompanied by a tinkling of piano, tasteful acoustic guitar and a Stolt lead line which isn’t too far from how you’d expect Yes mate Steve Howe to be decorating the tune.

The template is set for an all encompassing journey along  the Anderson path of spirituality and enlightenment; the soundtrack masterminded by Stolt and his Flower King buddies Jonas Reingold and Felix Lehrmann.  To that you can add  a smattering of Wakeman-y  blasts of keyboard and piano runs – courtesy of Tom Brislin who many will remember as the keyboard player on the Yes Symphonic tour of 2000/1 – but the whole album is characterised with the stamp of Stolt adding his distinctive guitar often enough for it not to see that they’re just trying to recreate – musically or lyrically – simply a clever imitation of classic Yes. It’s possibly more towards what you’d hope, want or expect 2016 classic Yes to sound like. Music  with a progressive philosophy rather than  just common or garden  progressive rock. Suffice to say that if Howe ever decamps from Yes,  Stolt is more than capable of stepping up and carrying the flame.

For some it might  be twee and fey  as Anderson lets loose with his visions of truth, enlightenment and indeed knowledge , packed with lines such as  “everyone has a story of greater revelation” and  the “we are truth made in heaven, we are glorious” call – his imaginingss and revelations abound not so  far from the sort of path that that Anderson has been following  since 1975’s ‘Olias Of Sunhillow’ to which the new project owes more than a nod.

The soaring moments peak in ‘Everybody Heals’ yet for all the lengthy tracks and their component parts, ‘Invention Of Knowledge’ is really a whole not so far from a classical  symphony. There are no radio friendly hits, no songs with a handily placed chorus, it really is a musical  odyssey, ambient and atmospheric, spacey and other-worldy; cosmic even!  In fact, Yes students may well recall one of Yes’ Wembley gigs in 1978 (it was on a famous bootleg from a radio broadcast ) when  Anderson’s patter on the introducing ‘Starship Trooper’  included the line “I think we’re all a teeny bit cosmic sometimes.”  If they hadn’t  done so already, his words have finally come home to roost.

Watch a teaser for the album here: