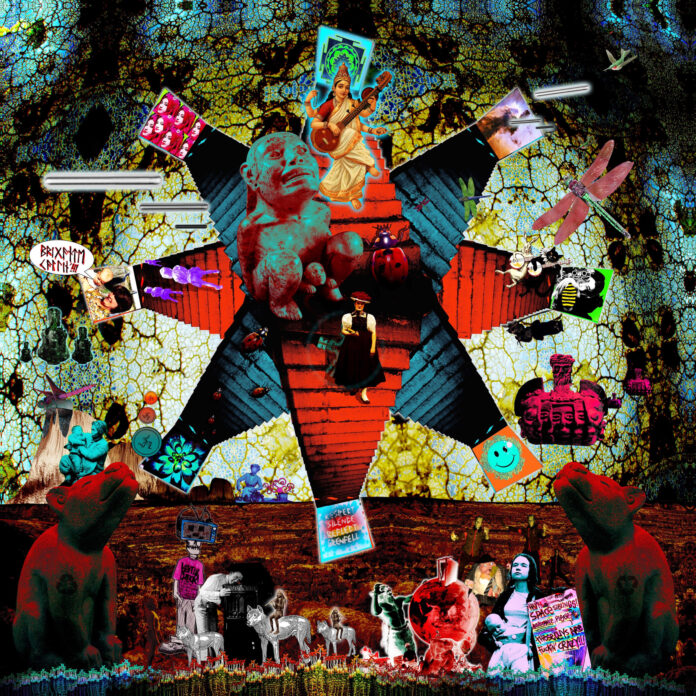 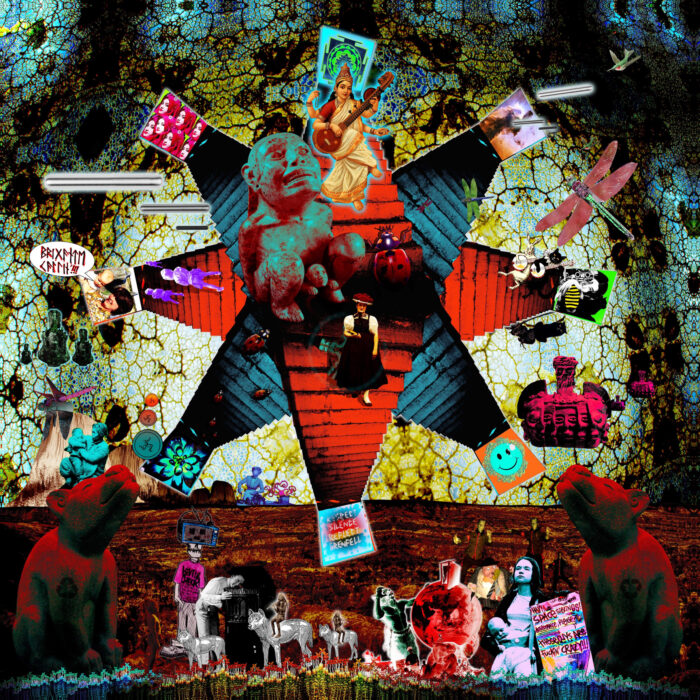 Punk pranksters and provocateurs Anarchistwood finally release Chiasmata, an album that started back in 2019, but with global pandemics, only recently was fully recorded. Along the way, terrible personal tragedy hit the band, and that they have created a typically uplifting and thought-provoking album is testament to their resilience and commitment to their artistic creativity.

Anarchistwood were formed back in 2005 by Funkcutter and Candiflp Blackwood, releasing three albums up to 2016, the last being the Nasty Album, which we reviewed here. Candi and Funk would become partners in love as well as the driving force within the band, who gathered fans wherever they played, with their diverse individual images and over the top fun encouraging audience participation in an art-punk collective. But punk is too small a label for the band who mix up psychedelia, hippy and trance with the raucousness and attitude of punk. Chiasmata has a symphonic feel to it, with a wider soundscape and intricacy than seen before on Anarchistwood recordings, which is something that Candiflp wanted to move more towards, but as always there are some great melodies and it’s so damn danceable.

Opening track Fear Is The Mind Killer is a great rocking punk tune, like a crazy fun fair ride that keeps up the tension. Lyrically it quotes from Frank Herbert’s Dune, and it resonates in these paranoid, conspiracy heavy times. Alienation has a heavy bass riff, guitars screeching in, slicing like safety pins, and Funk’s voice fluctuating between operatic, shrieking and didactic. Next up, Mr Meenors, with the mantra, forgive us our misdemeanours, repeated over and over (Mr Meenors, geddit?), has a jazz beat with brittle guitar scattered over it.

Bastard Ozymandias Laughs is smoother and slower in the verses, with a creeping beat. It’s a cool groove with trumpet, violin and effects heavy guitar skittering over the tune. It’s an appropriation of Shelley’s famous poem on the futility and vanity of power. Clowning (Anarchistwood seem to have a thing about Clowns, see our review of their Fear Is a Mind Killer film here) is an Old Ernie track and sounds like the Slits with its slightly sinister reggae beat.

Drain has a 50s noir feel to it, with brass instruments giving the song its multi aural feel, drifting over an industrial beat. It ends with a soundbite about the degradation of society by punks. Smiley, a song about freedom, particularly the Kurds and their struggles, is a bounding song with a burning violin and a singalong chorus. Anarchistwood do great melodies.

Twaz Day Risin’ is an electronic song, with deep industrial noises and Sleaford Mods samples. The Chiasmata Choir provide a school assembly noise for True (Love and Faith) Part III, you can almost see the ragged ties and smell the semolina. War(t)hog quotes Crass’s “Fight War, Not Wars”, and wonders what is the point of life in a bleak existential moment.  Demon Kills is hippy psych poetry with a pagan feel and hints of William Blake.

Final track, Don’t, starts like a pop song before becoming heavier and attacks the usual punk scene problems of what is allowed to be punk. It’s an issue that’s been around since the beginning of punk when it became one of the strictest scenes with its don’t do this, don’t do that attitude. For a movement that espouses a DIY and be yourself agenda, it is full of a lot of dictators, and Anarchistwood show them up here: Don’t be a dick, don’t be a cunt.

In November 2020, Candiflp Blackwood, went missing, his body found on Boxing Day. That the band, and in particular Funkcutter, have pulled together and released this album in the face of this unimaginable tragedy is to be respected. The fact that it’s a great Anarchistwood album with a melange of ideas with several sources, an album that is best listened to in one sitting, is even more commendable.

For a band that has bought so much subversive fun to the scene, we wish them happier days ahead.