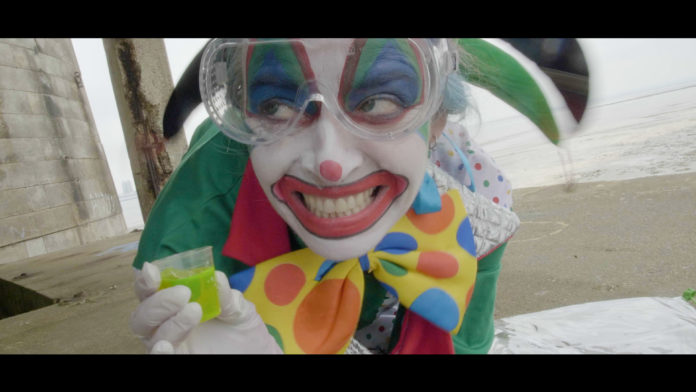 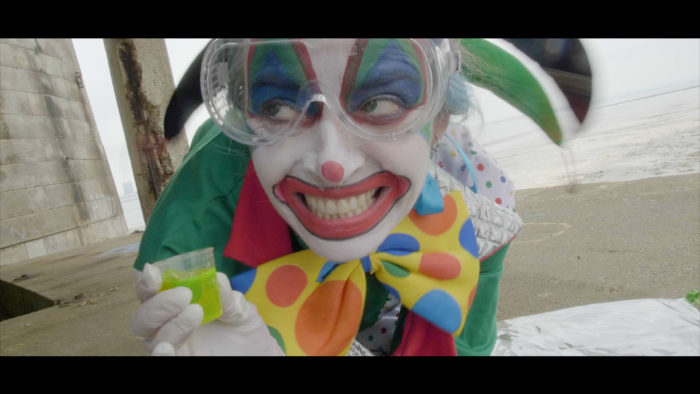 ‘Anarchistwood seem to be the most bat-shit-crazy band left …’ said Ged Babey when LTW premiered their Bomb In a Luggage Rack video. Now the Anarcho-libertarian-art-hippy-fun Punks with an endless supply of grease-paint are back, with a bizarre epic video, with echoes of Kubrick, Jarman, Ken Russell, Lindsay Anderson and The Prisoner… set in their own nightmarish, psychedelic parallel world.  So much more than a ‘music video’, this is a hyperrealist, surrealist, subversive work of mischievous art.  Over to Mark Ray.

With the UK Parliament in a stagnation of chaos as MP’s cling to the legs of the Speaker like some silent film heroines and sing songs like Mel Gibson in full Braveheart mode, before being chauffeur-driven home with smug smiles on their faces, the time is perfect for a short film from those arch agent provocateur pranksters, Anarchistwood. The film, in association with Black Triangle, won the best Music Film at Portobello Film Festival 2018 and was a finalist at NanoCon International Film Festival 2019 and features Anarchistwood who play themselves alongside Jenny Runacre (Jubilee, The Witches), Sobriety Twist (Queen of Carnage, Nocioception), Sexton Ming (Pervirella), Jemma Freeman (from the band Jemma Freeman and the Cosmic Something) and Peter Kopinski.

The fourteen-minute film follows the panic in a post-Brexit United State of England over the proliferation of clowns who roam England’s streets in their outlandish attire and poke fun where no fun should be poked. Sobriety Twist plays an arch clown catcher in full child catcher mode from Chitty Chitty Bang Bang – once rounded up the clowns’ have their red noses surgically removed to return them to useful members of society…but the clowns plan to fight back.

With Parliament prorogued, it really is time to send in the clowns.

‘Fear is The Mind Killer Soundtrack’ features music from Anarchistwood and Maelific Jester. The soundtrack should be available for digital download today, 13th September 2019.