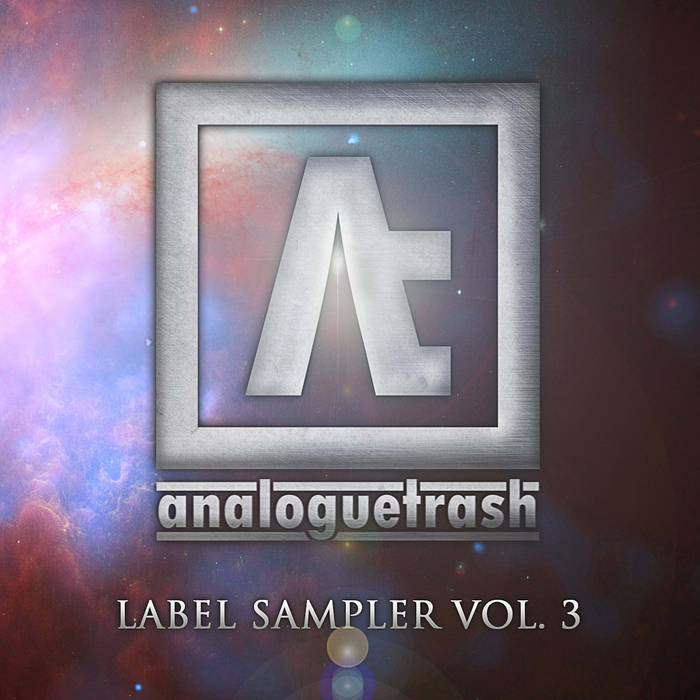 AnalogueTrash’s Label Sampler Vol. 3 opens up some of the freshest and most experimental contemporary electronica out there right now, with 14 substantial tracks, each from a different artist on the Manchester-born record label, running since 2009. Emily Oldfield reviews.

Aside from many electronic compilations, the third sampler from AnalogueTrash seems to have been selected with real structure and consideration for the audience’s listening journey, rather than just a collection of club anthems as so often befalls the genre. This is certainly one better.

With rousing rhythmic pieces as well as some more ambient-
inspired tracks for reflection – with of course some aggression added in here and there – this the type of variety which keeps our attention. Inspiring too, any sales or streaming royalties gained from all three editions of the samplers so far will be donated to Refugee Action, according to the label.

To start is Neonsol’s Another Day with a futuristic feel and thick layers of bassline topped with female voice lamenting ‘missing opportunities’. Music for the modern day? The growing dual vocals give the piece an extent of personal power which packs a punch in a well-balanced track just under four minutes and is an impressive choice of opener. But this is a compilation which just keeps on coming – as before you know it Syd.31’s single mix of We Are The Freaks seethes in, with even more electronic edge; the kind of music you that doesn’t just energise you to listen, but drives you to dance. To be up on your feet and thrashing around by track two is a sign of strength, in my view.

The raw screamed vocals along with blasts of guitar in the verses work at an effective contrast with the ascending electronica of the chorus, coming to the final cry of ‘there’s no one like us, so no one likes us’. Music which includes your angst, rather than making you feel excluded – a chaos which is catchy.

Def Neon’s Animal follows with a well-chosen warmer pop contrast, opening with lion’s roar and then a rapid electronic bassline, topped with female vocals which bring a delicious dance edge. The half-rhyme of ‘animals’ with ‘insatiable’ in the chorus, along with a driving drumbeat makes it a catchy hit yet avoiding the usual pop clichés, well-layered enough with creative musicianship to make it work. The robotised vocals and slow-motion in the mid-section is particularly interesting, I think.

Yet this is also a compilation which considers multiple moods, as next is AWG from Factory Acts with dark, mood-driven electronica, well-placed to follow the more vocal piece previous. The repetition of ‘We’re Americans with guns’ tells of anger at aggression, rather than a show of aggression itself – a highly relevant, rousing piece from their recent album Second Amendment. It is a well-thought out blend of voice and spiralling electronica, telling us of panic, paranoia and a political track which uses the electronic genre to a dramatic extent. The use of recorded material mixes in well too.

The foreboding of Pre Cog’s Please Stand By feeds into the socially-aware sound, the vocals seeming low in the mix which may make the listener strain a little to hear, but this may be cleverly intentional to captivate attention. Repeated electronic pulses give the track a rousing quality, which in combination with the subtler vocals, suggests an exploration of emotion.

From rousing emotion – to explosion. A stand-out track, with one of the most blistering drumbeats on the album has to be Push The Button from St Lucifer, a Manchester-based fusion of post-pop noise with a real anger. The dual vocals, half-rhymes of ‘romantic’ and ‘panic’ tell of the uneasiness of human connections – making the central chant of ‘push the button baby’ unnerving as well as enchanting. It shows clear progression in the band’s sound too, becoming increasingly intense – ‘freak out or react/ attack attack attack’ seemingly simple vocals but particularly well-suited to the soundscape they have created.

IIOIOIOII’s Runner opens with a more minimal quality, matching plashes of keys well with electronic pulses and robotic vocals. This track is futuristic in feel, well-placed on the compilation and is constructed of several intervals where the track bubbles and builds. A progressive point which allows the listener to contemplate on their listening experience so far, I think. Coming in next, Goteki’s Feel The Fear could be described as a kind of ‘paranoia pop’ in a similar audience-aware vein, upbeat electronica and claps keeping the question of ‘can you feel the fear?’ – thrillingly relentless. ‘Dance to the rhythm of your breaking heart’ is a particularly memorable line too, the track growing in intensity with an intense beat which sounds creepily like a stapler brought close to the ear. Sound which evokes new sensations yet distorts domestic situations certainly gets my vote and the vocal reflection at the end ‘you’re not the only one that’s downing here’ is testament to a track which can manage minimalism well as a wall of sound.

Room 1985’s This Is The Way works a treat in headphones and is another vocal contrast, a combination of voice and recorded speech sashaying from side to side. The lines ‘he took my heart without permission and left it battered and bruised’, along with drawn-out guitar-inspired electronica, adds to a growing mood of emotional exploration – as mentioned in the previous track. This emphasizes that although this is a compilation, it doesn’t cut out emotive power like some collections do.

‘Tears From The Night Sky by Dreams Divide follows directly and another show of vocals done well, almost chant-like, along with sublime electronics and a well-paced drum-beat. Then the entrance of a male voice, more menacing, sets the precedent for a duet, which works well across an electronic soundscape which is somewhat slower and more meditative than many of the other tracks on the album. A well-crafted piece at this stage in the compilation, it is a great builder of mood and highlights the ability of AnalogueTrash to embrace vocal quality as well as the electronica. Tears From The Night Sky is not just electronica but an emotive experience, well-maintained at an impressive length at just over five minutes.

The experiential quality extends to much of the compilation, as the following track Towards The Sun, a remix from AtomZero, includes a beginning which is captivatingly dark, with almost squelchy, relentless beats topped up with layers which shake and fizz. Great gaming music, I’d say, with a real driving quality to it. The breathy vocals build on the air of the robotic in the track – adding again to the power.

Vieon’s Meteor is the following track, and a welcome instrumental contrast, which is more atmospherically-spacey than aggressive, allowing the listener to contemplate the experience. The co-ordination of tracks on the compilation, allowing for reflection amidst the intense electronica certainly works in its credit. It is impressively layered piece, with a ticking drum beat, sublime synth-work and a humming bassline, fading out with extended keys. Testament to Vieon’s undoubted skill and an audio treat.

Another track giving the ears an electronic exploratory feast is Defect from Advance, a track of growing scale, electronica building up by layer by layer, becoming anthemic yet still with the satisfaction of the melody moving underneath. This is a high energy instrumental and therefore a strategic choice keeping us energised, interested towards the close of the compilation – allowing us to be captivated by the music alone; a sign of strength for sure on an electronica label. The intensity creates a mood of intrigue before a more subdued, spacey mid-section which adds interest and builds back up with a creative cacophony of layers; marking out music as a whole moment of experience rather than just a track.

To finish, Nature of Wires turn Time Is Come into an epic sound of projected male vocals and waves of electronica. The repetition of ‘time is’ along with ascending melodies make this track particularly upbeat and catchy –good biking music I should think, if you are lucky enough to be a rider. Closing with keys, it is a welcome piece for reflection too, well-placed in the construct of the compilation.

This brings a fitting close to compilation of electronica which not only opens your ears, but allows the listener to appreciate some of the latest techniques shaping the progression of contemporary artists experimenting in the genre. Creativity which does not compromise the catchiness. You won’t be disappointed.