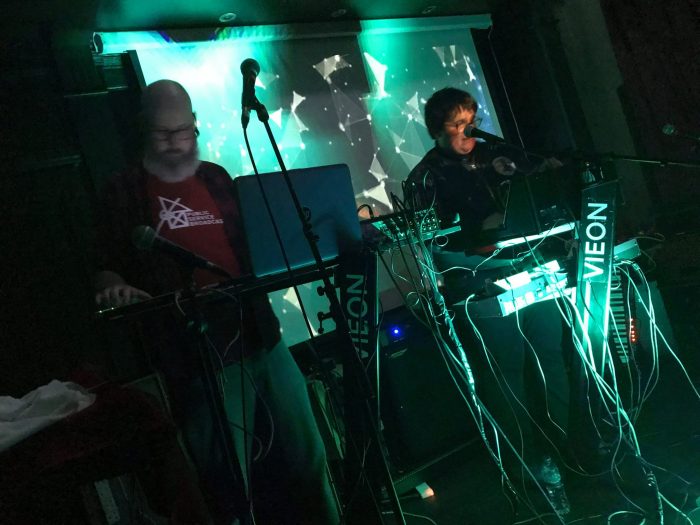 One of the most alluring light-visual experiences I have had in a while at a gig, plus electronica plunged through with punkishness – all on the cards at AnalogueTrash’s penultimate live event for 2017 in Manchester on 15th July at The Castle Hotel; featuring Vieon, Duck and SOFT RIOT. This is a Manchester-born independent record label bringing some of the most interesting electronica to the fore through immersive live events – far more than just a ‘gig’.

The evening also highlighted the connective power and ability to influence experience held by electronic music. Why? The sensual synth of hausfrau (enigmatic electro soloist well worth a listen) was part of the bill, but unfortunately due to unforeseen circumstances, had to drop out. With less than 48 hours before the gig, the electronic act of Vieon got in touch to make the trip and plug us in.

And it was a trip well worth it. Vieon – featuring two thirds of the group’s line-up (Matt Wild and Adrian Brian Thompson – Josh Green unfortunately away) made an immediate impression , as first on the stage with live visuals which immersed and oscillated along with the sound. With Thompson providing this power, a sight to behold of blistering light waves, space-scapes and sci-fi like footage – the screen certainly added to the musical experience and was very much a strength.

The sound quality hit hard too, from the hip-clicking rhythm opening a short slick version of Transmission to the spacey synth web of Meteor. A particular favourite was the cinematic impression of Fly By Light with rousing robotised vocals combined with a driving rhythm and wrapped up in Wild’s ever-impressive keytar solo. This is music which makes you want to open a door into another world. 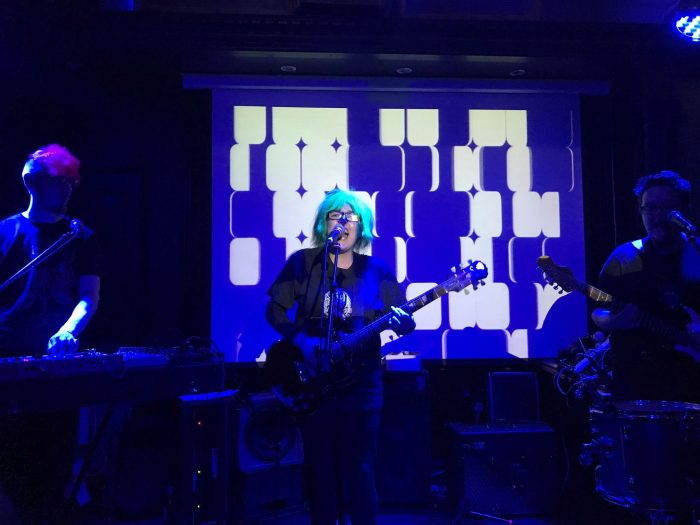 Following on from this impressive surprise was Duck, a three-piece from Yorkshire (Sheffield and Leeds) bringing their wonky punk-pop to Manchester. And it was satisfying – and well done. I particularly enjoyed the punkish element, with real raw hooks of music creating an almost industrial level of chaos – ideal for the overlay of spiralling female vocals which definitely set Duck apart from many synth-guitar bands out there.

These were tracks telling of urban experience – a kind of punk informed by the strength of synth and experimental guitar – along with a real driving rhythm delivered through live drumming. A stand out track is Lip On The Floor, showing off this drum-rhythm to great effect, with seething synth and the repetition ‘I am too much but not enough’ telling of frustration and desire which had us all dancing. One to listen to again and again, I think.

SOFT RIOT was the final feature of the evening – atmospheric art punk expressed by one man only – JJD– and the audience watched transfixed as he worked a web of instrumentation all at once. He held a bold visual presence, body clearly caught by the music, hands hopping from synths, to flicking samples, to providing programming – lavishing layers of a soundscape into the room.

Clear electronic ability, and socially intelligent too. Tracks like Lovers in a Dangerous Time developing with a dark tone, and deep, brooding vocals. Artistic dedication driven by emotive electronica – and with an extensive back catalogue, you are likely to find a SOFT RIOT space of your very own.

Another glittering three acts from AnalogueTrash and all sharing the interesting theme of electro-fed, immersive punk. From Vieon’s Avant-Garde exploration of the truly modern age, to Duck’s drive and SOFT RIOT’s reminiscence, this was a real treat of an evening.