Originally from Newcastle, Dr Paul Carr has spent time living in London, Dorset and, for the last 13 years, Wales. He currently lives in Merthyr, which he has for the last two years, and is a Reader in Popular Music Analysis at the ATRiuM, University of South Wales, in Cardiff. His research interests focus on the areas of musicology, widening access, the music industry and pedagogical frameworks for music related education – publishing extensively in all of these areas.

Paul’s current study is an Oral History project investigating popular music in Merthyr Tydfil between 1955 to 1970. It documents how Merthyr can contribute to the largely untold narratives of popular music history, which are so often dominated by major cities, in particular London. “I chose it (Merthyr) as a place to explore because I live here – I have a vested interest. However, my interest is much deeper than that. Merthyr has a rich musical history, and I want to try and make this more visible to both the local community but also for visitors.”

His home city, Newcastle, like Merthyr, was built on industry. Does Paul see any other similarities – such as how the music venues were founded, funded and constructed? “The most obvious similarity that most people would refer to would be the coal mining industry, although both places have important narratives to contribute to the history of popular music too.”

The most well known band to come out of Merthyr during this time is Man, previously known as The Bystanders. The work undertaken has already resulted in lots of memories of this band, including memorabilia such as ticket stubbs, posters, photos, etc. “What I have found out during the last few months though is that the community has memories and memorabilia of many other bands too, ranging from the St. Louis Band, the Pathfinders and the Spymasters in the 50s, the Cheatin’ Harts in the 60s, to the Westerners in the 70s.” 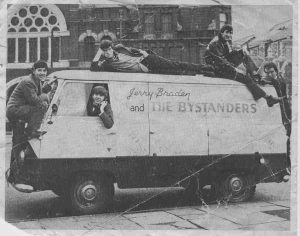 The Bystanders: who would eventually merge into Man. Picture courtesy of Old Merthyr Tydfil.

Memories and demise are documented throughout – especially the venues. “The Miners Hall, The Palace Cinema and The Castle Cinema, all venues that either don’t exist anymore due to them being demolished, or exist only in a form of dereliction.” Many of the bands mentioned played in these venues.

As we walk past these places, he adds that: “It is so easy to forget the part they played in the development of popular music not only in Merthyr and Wales, but also the UK as a whole. In the 1960s, bands such as Pink Floyd and Hermits Hermits performed in the Castle Cinema for example, often with local bands supporting. Additionally and also during the 1960s, countless bands such as Charles Kingsley and the Combos, The Sultans, the Desifanados and The Wild Ones played at The Palace Cinema on a Saturday evening. There are still many people around who remember these events and I want to capture these memories in digitized form.”

The Spymasters at the Miners Hall: Picture courtesy of Janet Thomas.

I asked who were the other popular acts of these times: “The list is too long to document here, but local bands from Merthyr that emerged during this time include The Syndicate, The Phil Gaye Combo, The Crecendos, Little Walter and the Four Squares, Pete Lovis and the Tremolos, The Westerners and Cal Ford.” 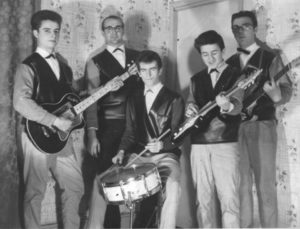 Many of these bands are on the periphery of popular music history. However, understanding how these bands and artists developed and were consumed by the general public provide an important snapshot of popular music history. “Although they are certainly not household names, many of these bands did record, toured extensively and worked with established musicians such as Johnny Cash. It is stories such as this that the project hopes to bring to the surface.”

Many cities contribution to music and developing it have been well documented through print, compilations and film – but these are mostly large cities. Paul has localised the most local and has come at it with an academic approach – highlighting the importance of Merthyr as a key town in the development of popular music in Wales. It becomes even more important as: “In recent times, evidence suggests that many touring artists don’t even visit Wales, let alone Merthyr, so these times represent a time in the music industry that will probably never be repeated. Some regular gigs still exist today at venues like The Crown, but it is difficult to imagine how much entertainment actually took place in Merthyr between the 50s – 70s. Can you imagine having a choice of four cinemas, all within a few minutes walk of each other in the center of town?”

Thanks to Paul’s endeavour – he brings the past into the future: “The idea is to use iBeacons technology, so anyone interested in understanding the history of specific bands and their relationship to important buildings, will simply be able to stand outside of the building (or where it used to be) with their mobile device and access the information directly. All of the information will also be available online too, for communities of interest who don’t live in the area. I think one of the most exciting facets of the project is that we are also working on being able to reconstruct one of the buildings in 3D, so people who don’t remember the 1960s will be able to get a taste of what it was like to see a band on a stage in a venue like the Castle Cinema.”

Within every person lies a memory. Within every building lies a history. The Oral History of Popular Music in Merthyr Tydfil – stands as an important document of both.

The Facebook page: Oral History of Popular Music in Merthyr Tydfil can be found here and Paul Carr’s webpage here.