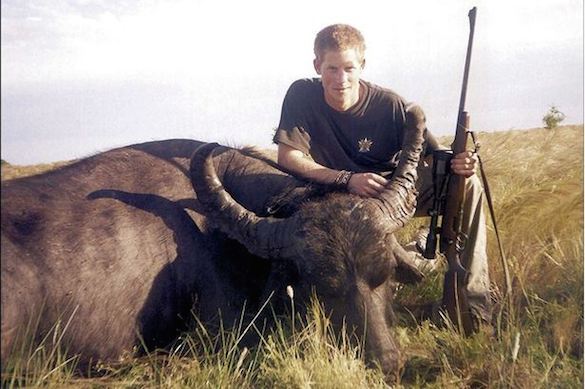 Of course you won’t be reading this.

Maybe you will be too busy shooting slow, lumbering, defenceless water buffalo from a long distance with your high velocity rifle.

It’s a manly pursuit isn’t it? A real warrior pursuit- hiding behind a rock and then blasting away at a huge animal without it even having the chance to defend itself and then posing for the photo afterwards with your consciousness covered in blood but your hands oddly clean. That’s what real men do apparently. If you actually ate the damn thing it would be worth it but…

It may be an old photo from 10 years ago but it’s not the first time this hunting stuff has come up with a whole list of hunting incidents over the last few years involving your good self but in the context of you and your brother heading up a campaign for endangered species ten days after Prince William went boar shooting in Spain it all looks a bit, well, not right.

This campaign that you and your brother are launching to protect endangered species is very admirable but it is starting to look a tad hypocritical and more like a PR stunt than something that comes from the heart.

We realise that everyone has to have a hobby and we don’t expect you to be role models or , ahem, royal models. We do wonder, though, where the law would stand if normal kids ran around shooting every furry thing they could on the local park and posed for bloodshot selfies.

This is not an anti royal family rant. We know that it’s the way you were brought up – we have seen the endless pictures of your parents and grandparents ripping animals heads off and shooting and killing things for fun on their huge estates like that is somehow normal behaviour. But because they are screwed up it doesn’t mean you have to be, especially as you are meant to be the ‘new royals’ a bit more in touch with the world.

Maybe this is the time to prove you really are the new generation.

Drop this cowardly hunting lark- it surely can’t be an adrenaline buzz shooting something that is munching on grass from a huge distance- what’s exciting about that? if you wrested it to the ground and risked your own bones we could respect you a bit more.

This could be the time to show you have enetered the real world but we very much doubt it.