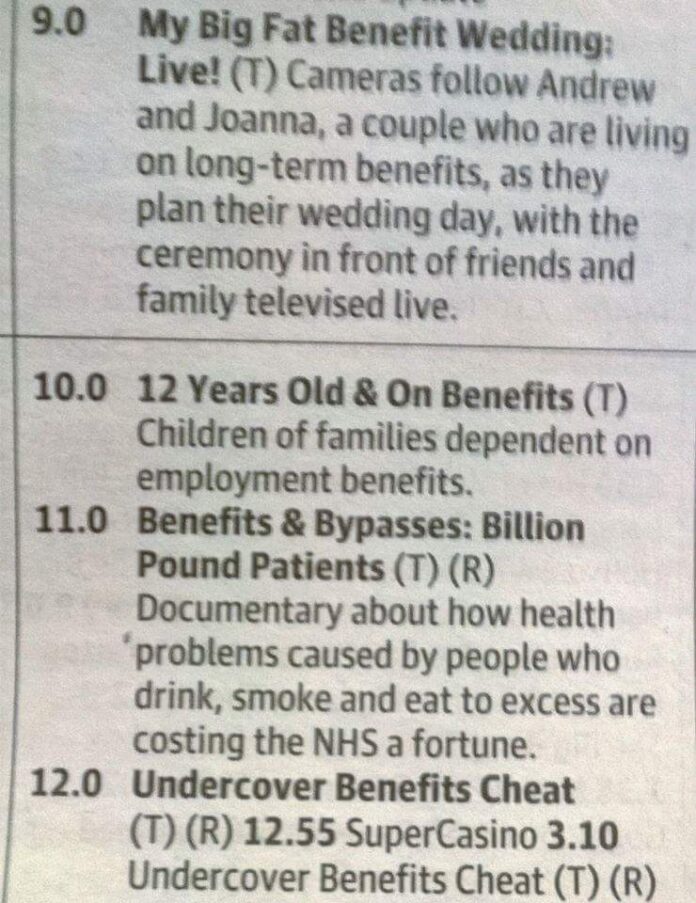 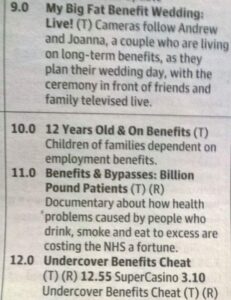 The Tories are in power and the machine of state is starting to grip tighter and tighter and the zeitgeist of hate is being perpetuated through cheap TV channels laughing at people who can’t fight back. When Joe Strummer wrote the words form Clampdown he was imaging a dystopian future in the now and it seems we have finally arrived there.

Is this your idea of TV Channel 5? This smug sniggering at people with no money and no opportunities. Or is this part of the New Tory agenda, this blame everyone for the woes of the nation apart from the real perpetrators.

The media spin is in full flow from Labour causing the worldwide economic crash to the poor people for being well. er, poor. In 2015 the Tories have been strutting across England like evil barons, the real life, real time Sheriffs of Nottingham and that slippery slimy creature in their wake touching its forelock and doing their propaganda job for them is you Channel Five.

You should be ashamed.

A series of programmes bashing the poor is that your idea of TV? where was the right of reply, where was the balance, where was the humanity? A twisted version of the UK present a Daily mail view of Blighty, a view that those who won’t volunteer for slave labour are somehow ‘spongers’ that those who by an accident of birth of geography don’t get the silver spoon. The UK is becoming an ugly and mean place, the flames of resentment and nastiness are being fanned by the well heeled and smug churning out trash TV like this.

‘Working for the clampdown’ as the Clash once sang. Take it away Joe…

The voices in your head are calling
Stop wasting your time, there’s nothing coming
Only a fool would think someone could save you
The men at the factory are old and cunning
You don’t owe nothing, so boy get running
It’s the best years of your life they want to steal