Home Music Bands An Interview with The Travelling Band 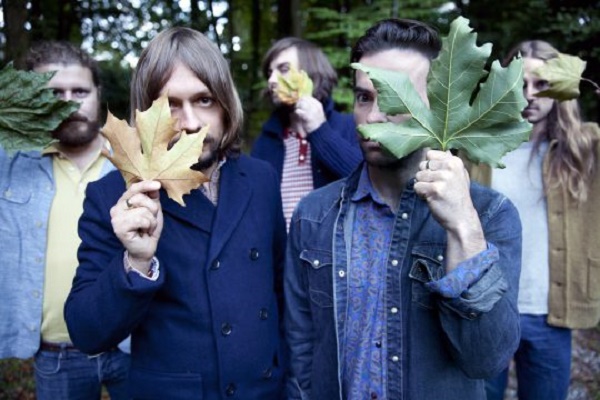 Purveyors of Mancunian folk-pop gems The Travelling Band haven’t spoken to the written media for quite a while. All that is set to change with the recent release of their third album The Big DeFreeze (Louder Than War review here) however, and Louder Than War’s Dave Beech was luckily enough to be the first to ask them a handful questions on the record.

Louder Than War: Hi guys, thanks for taking the time out to have a chat with us. How are we all today? There’s been three years in between albums, some would argue that’s quite a while. What were you getting up to in those three years? Other than writing a record, of course.

Adam Gorman: Hello! No problem, I’m good thanks. Enjoying the last throes of summer. It took us a while to get all the logistics right for this one. We were on tour for quite a while after the release of Screaming Is Something and when it came time to look at the new record we had to raise the money to record it, and we decided to do that through a Pledge campaign. It was great to get so much support through that from the fans, and we had the opportunity to record with Iestyn Polson at The Church in Crouch End. It took a while for all that to come together but it was worth the planning. I think the expanse of the live room and the setting really comes across in the record.

Building your own recording studio must have taken a while. Was it worth while? And has that enabled you to look in to releasing your own material, essentially cutting out the middle man?

We’ve got our own place in Manchester. We’ve basically just pooled all our gear, as we’ve all amassed a lot of stuff over the years, and we’ve got the makings of a really nice studio through doing that. We’ve always been into recording ourselves. The 2nd album was all recorded and produced with our own rig and we did all the demoing for The Big Defreeze too. It’s something we might look at for the next record again. It’s great to work with good producers as it’s a constant learning experience and a really healthy way to pick up stuff that ultimately ends up in your own production.

Similarly, how’s your own label looking? Any plans for in the near future to release material from friends and smaller bands?

The latest album is out on our own label, Sideways Saloon, as was the first record. We’re working in tandem with Brighton based Republic of Music on this one too. It’s something we’ve always kept alive as well with live nights in Manchester, putting artists on that we meet on our travels. We’ve certainly thought about putting out other bands albums, but not quite found the right time yet, being busy with The Travelling Band. There’s been a couple of compilations that we’ve put out, notably the MaK ‘ten’ album, which was a celebration of Manchester music at the time. I’m sure there’ll be a point when that happens though and we look at taking on another band with the label.

You ended your last tour by playing SXSW. That’s got to be a pretty big accomplishment, especially for a band with such a folk-driven sound. What was it like playing such a legendary event?

It was great to get over there and see what it was all about. I’d been over to Texas before but not when SXSW was on and it was a real experience. There’s a hell of a lot going on, round the clock, and there’s literally thousands of bands to go and see.. We stayed with a friend of ours a little way out of Austin so it was nice to have a little retreat from the madness after we’d played and been soaking up the sights!

Your new album, The Big Defreeze, is far more expansive, even picturesque when compared to some of your Mancunian contemporaries’ work, there’s a bucolism to it which belies the fact you’re even from Manchester. How, if at all, has the city influenced your music?

If’s definitely in there, maybe not in an obvious way, but it’s where we got the band together and where we’ve been doing it for the last seven years. Maybe in little flourishes of melody or certain rhythms. There’s a lot of non-musical influence in there too though. Three of us used to live in coastal Wales so that comes across too. We’ve also spent a fair bit of time in America. I was over there travelling around in my early twenties. So all these things come together, it’s not really a conscious thing.

On a similar note, there’s an a definite sense of movement across the album, almost like an auditory road trip. What was it that influenced these feelings of spaciousness, freedom and momentum?

See above! No, it’s sounds cliched, but we’ve spent a lot of time on the road. It’s been romanticised a lot over the years but it’s only natural that the music is gonna reflect that in some way. Again, it’s not really conscious, and I don’t thing lyrically this album is reflective of that too much, but it doesn’t surprise me that that comes across.

The record was produced by Iestyn Polson, who’s worked with the likes of Bowie and Patti Smith. What was it like working with someone with such credits to his name? Did he bring anything new to the table, or did you take anything away from the sessions?

It was great to work with Iestyn. His kind of home base studio wise when he’s in London is the Church in Crouch End. It was built by Dave Stewart and Eurythmics and has got a great heritage. It’s a beautiful live room too, It was an interesting process. We kind of got the songs to a point, then Iestyn came up to Manchester for a couple of weeks and sat in on the rehearsals and we cut all the fat out of the arrangements, tweaked them back and forward a bit. It was good to get a fresh pair of ears on it after we’d been working on it for a while. When we felt they were ready we went down to London to record. It was good to see his methods, everyone works differently and it’s nice to see it all fit together when you come to record it. I always take something new away when we work with people like that. Some things might work for you in the future and some might not, but it extends the tools you have to work with., so to speak.

The first track to be taken from the record, Passing Ships is a track in which the narrative works on several levels, from the romantic, to the psychedelic. Can you elaborate on the story behind it?

The song is about the dream state and a fantasy (or theory) that people can occupy the same dreams simultaneously from different perspectives. I’d also been watching Harold and Maude, a beautiful story of two people who’s circumstances collide while they are travelling in opposite directions in life. The films imagery infiltrated a particular dream which involved a faceless man tormenting my soul. I’d always loved the metaphor “like passing ship in the night”, so I employed it as the main theme to reflect these concepts of missed connections, unfulfilled love, happenstance and the chaotic sliding doors of the subconscious dream world.

Borrowed and Blue is one of the album’s strongest tracks, it shows different aspects of you as a band, and also marks a turning point of sorts in the record. How did that track come about? Is there a story behind it?

It’s probably one of the older songs on the record, and started life as more of an acoustic thing. It’s about pulling yourself back from a loveless situation, with a failing vehicle as the backdrop. It certainly developed when it came to the band. As soon as we started playing the verse section, there was a real atmosphere to it and we developed it from there. it’s the start of the flip side on the vinyl which is something we think about when we’re compiling the record! It’s expanded again now when we play it live.

You’re about to embark on a tour in support of The Big Defreeze, are you looking forward to getting back out on the road after so long without a tour? Any reservations?

Can’t wait! We’ve been playing at festivals all summer, so it’s not like we’ve been away from playing live, but it’ll be nice to be on our own tour. We’ve got some great supports lined up too. Rook and the Ravens re playing a few, we’re doing the Edinburgh show with The Holy Ghosts and quite a few more along the way. It’ll be good to get the new songs into the live set. No reservations!

Finally, it’s been a while since you’ve spoken to any written media for a while. As such is there any news or exclusives you’d care to leave our readers with?

The video for Passing Ships is coming very soon! We worked with all-analogue artist Cherry Kino, and it was filmed in and around Anglesey. It’s come out really nice and we’re looking forward to sharing it!

Thanks guys, it’s been a pleasure.

The band have a Manchester headline show lined up at Gorilla on Sat 4th Oct.