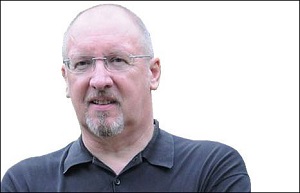 At Louder Than War we make no excuses for being huge fans of Radio Lancashire’s On The Wire. As the show celebrates its 30th Anniversary, we bring you several articles written by Paul Scott-Bates, a listener and fan of the show for almost twenty nine of those glorious years.

Louder Than War: Happy birthday to you!

1984 – The Smiths released their debut album, Philip Larkin turned down the job of Poet Laureate and John Bond left Burnley Football Club. Were any of these more important than the birth of On the Wire?

Not in my mind at least. On the Wire is something of a broadcasting quirk, I don’t think the BBC or any ILR station would start to host such a show. When you look at what’s going out today it’s all nicely packaged into demographics and digestible audio bites – and every seems to be excited all the time.

When you first started with On the Wire, you probably didn’t expect to still be on air thirty years later with the longest running alternative music programme on the BBC. What were your hopes?

We didn’t really have any expectations as we were so pleased to be doing what we were doing, 3 hours of freeform radio on a Sunday afternoon. The programme got very popular very quickly across the north west and nationally/internationally because there wasn’t anything like it elsewhere.

What do you think have been the most exciting changes in music since 1984?

Well I must admit to not waiting for these “changes” to come along like a bus. Most changes aren’t really recognised and when they are then there tends to be a quick absorption into the mainstream like rap and dubstep for instance. What’s more interesting is looking for the work of individuals who don’t play by the rules.

And the most dire? Reality talent shows must be up there?

None of those count as music. One of the worst things to happen is that everyone wants to be a DJ. The number of musicians hosting radio shows is alarming, it’s also a lazy attitude hiring these people rather than looking for genuine talent for radio. 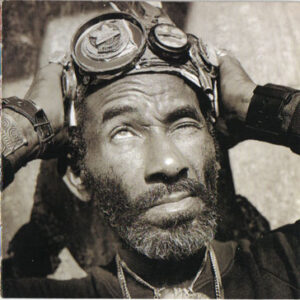 In the early days you had some big names through the doors – Depeche Mode, Lee ‘Scratch’ Perry, Adrian Sherwood – do any stick in your mind for any reason?

Well, it was early days, but Lee Perry comes to mind most. When we met him at first he was not the fabled trickster that people see these days, he seemed very tired and a little disillusioned. When he met Roger Eagle it was great; Roger was showing him all these Jamaican 7” singles that Lee had produced and Lee had actually forgotten some of them, he had a ballpoint pen ticking some of the labels and writing comments. He stayed at our house and the kids loved him. I am glad loads of people have given him money for his foolery over the past ten years or so.

Your association with Adrian Sherwood and On-U Sound is well documented, how did the friendship come about?

When I presented a show called Spinoff we played a lot of dub and reggae and I heard Adrian’s stuff before he started On-U Sound. He had a label called 4DRhythms so I contacted him and we did a phone interview around 1980, later that year I met him and Kishi when they were starting up On-U.

Do you mind being compared to John Peel? Is it a fair comparison?

I suppose it’s inevitable, although we were very different we were basically just punters who enjoyed a tune. John was always very supportive to On The Wire though. There could only be one John Peel, as the BBC has so adequately proved – as no show ever replaced his and they keep on running tributes rather than taking chances. Oh! And I didn’t go to public school.

You don’t do Twitter or Facebook, is that you being a bit Old Skool or can you just not be arsed?

I am deeply mistrustful of both, their ethics and impact on daily life, also the adoption of their use, without competition or proper oversight, by many public organisations for adoption as unchallenged in-house communication tools. Where’s the regulation that covers their operations except in the hands of their shareholders? Lots of people I know are withdrawing from either or both. If anyone wants to write to me they can contact me at the BBC and I will reply. It’s open communication. Meanwhile we have our websites and I don’t really have anything else to say to the world, why would we be so presumptuous? Why would any serious person really want to know what Gary Lineker thinks about anything?

Burnley in the Premiership whilst you work in the centre of Blackburn must be fun?

I sneak in and out of town under cover of darkness with my claret and blue bobble hat on.

Do you still have a vinyl copy of the show theme, Bugs On The Wire?

Both a finished copy and a white label! We were supposed to do a follow up called Shocks On the Wire and I had all the tracks, but the distributor went bust.

My everlasting memory of On the Wire will be hearing Fats Comet’s Bop Bop and then discovering On U Sound. It’s fair to say the two changed my life. Has there been any record that has had such an impact on you?

Funny you mention “Bop Bop” as I have had a few credits on records over the years but that one is my favourite as I am sandwiched between Afrika Bambaataa and James Brown! I can’t recall anything specific that provoked an epiphany except maybe when I was 14 buying a deleted copy of Robert Johnson’s King of the Delta Blues Singers for an old style pound at Accrington’s Bandbox Records, sadly no longer with us, it seemed so exotic and distant back then; also a few years later hearing Terry Riley’s Rainbow in Curved Air for the first time altered the possibilities of music for me.

Do you think Clitheroe has ever recovered from 2,500 people descending on the town to watch The Fall play live at the Castle?

That was a peculiar day – and only one policeman. We recently found the original quarter inch tapes for that gig. I quite regularly got asked for them but since I found them no one asks anymore. It’s like when the original interview I did with Jimi Hendrix in January 1967 was published in full a while ago everyone wanted the cassette tapes.

The On the Wire Xmas party at The Ritz in Manchester attracted Gary Clail, 808 State and Neneh Cherry amongst others. Were they all invited?

Each and every one, along with Mark Stewart, Adrian Sherwood, Little Annie and A Guy Called Gerald. We do have the master tapes for this gig! I recall Neneh was 8 months pregnant and left the Bomb The Bass gig across town to come and close the show at the Ritz, she was huge in more ways than one!

Fenny, Jim, Pete Haig and Andy Holmes are a good team. Could you have done it without them? You can be honest, they’ll never know.

Also we had Mikey Martin and Jethro (Culf) Binks as previous engineers to Jim. We have a very strong and loyal team over the years.

Where is home? Brierfield, Beijing or St Annes?

Back from China for three years now so it’s the West Coast for me!

You’d be waiting a long time, not cooked seriously for years. I blame my wife Jan who is an excellent cook.

What was the last gig you went to?

The Abyssinians at Manchester Band on the Wall.

Probably a gig at the old Nelson Imperial, maybe the Animals or Bo Diddley or David John and the Mood from Preston. Though I did see the Beatles in Blackpool at either the ABC or Odeon, I forget. Then I also saw the Big Three at a youth club in Accrington – maybe that was it.

The show has been under threat of being cut three times. Are you here to stay now?

I would not count on it.

What happens when you want to retire? Can I take over?

You can scramble over my body when I fall.

On behalf of fans and listeners of On the Wire all over the World, have a Happy Birthday. And thank you.

The On The Wire blog is here.