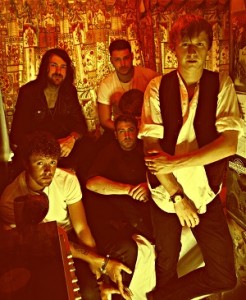 Dark and heavy psych-rockers, Kobadelta released the brilliant EP, The Hidden Door, earlier this year, and following an appearance at the Stockton Weekender in July alongside the likes of The Happy Mondays and Peter Hook, they release their new EP, Remain Distracted, later this month.

Louder Than War’s Paul Scott-Bates caught up with vocalist Dom Noble and guitarist Alex Malliris and fired a few questions their way.

Kobadelta – what’s in a name?
Dom – Koba is a fictional Georgian outlaw who appears as a character in book ‘The Patricide’ by Alexander Kazbegi. The character Koba was admired by, and later used as a pseudonym by Joseph Stalin, who was born in Georgia. Koba is seen as the embodiment of traditional Georgian knightly ideals, and is known for his simplistic moral code of honesty and loyalty.

Alex – Not that we’re big Stalin fans or communists or anything, we just liked the name Koba, the story behind it and what he stands for. He’s the hero of the story who respects friendship, defends truth and enforces justice.

Dom – That combined with Delta, as in the Delta Blues, gives us our name.

Together with Bernaccia, there seems to be a bit of an ‘Indie Psychedelic Rock’ thing going on in Newcastle. What’s all that about?
Alex – Without looking like we’re shooting your question down, I’m not too sure that there’s a really a psychedelic ‘scene’ or anything going on up here. I think it’s more a symptom of the times, like it seems to me to be the new ‘buzz word’. It’s banded about quite liberally these days, the term ‘psychedelic’, and we’re definitely not ‘out and out’ 60s psychedelia by any means at all, like some bands can be to the point of pastiche. It’s only certain elements to our sound, but like anything, it’s annoying when it’s used as a blanket label. Our song ‘Repetition’ covers that, with Dom’s lyrics “they worship that cursed kaleidoscope, choke down on your own tie-die T-shirt”.

Dom – In general it’s about being naïve to the world around us and trying to find where you belong without being shepherded by media and fashion. We’re more about getting people to be themselves and recognising their own individuality, offering something with their own voice and own persona. We are very anti-movement and anti-genre in that respect.

Alex – Not that we’re claiming to be ground-breaking or anything, but that kind of sums up the struggle we have in describing our sound and being uneasy with certain tags. I think we’re a lot darker than what you’d usually class as psychedelic – we aren’t denying it’s a part of our sound, but I don’t it’s what really defines us. ‘Dark and brooding indie-psych-rock’ seems to fit the best I think, it’s a mouthful but covers a bit of everything more than one single genre does!

What’s your relationship with Bernaccia?
Alex – I think we like to use the term ‘brothers in arms’. In the literal sense – both our frontmen are brothers.

Your last EP The Hidden Door got rave reviews (notably from Louder Than War), does the new collection Remain Distracted follow the same style?
Alex – Yeah cheers for that! I think we tried a few different ideas on the last EP and it seems that on this one we’ve found more of a cohesive sound. Hopefully we’ve took the parts that worked best and progressed it from there. I think it’s a bit heavier overall, but just as dark as the last one whilst keeping a sense of reflection in places.

Newcastle United for the title?
Alex – I wish, but sadly with the power and money that the top four/five clubs have I can’t see it happening any time soon. Probably not even in my lifetime! I could get into a rant about Ashley and Pardew and how the club is being run but I’ll not bother.

Keegan or Shearer?
Alex – It’s got to be Shearer, he’s our all-time top goal scorer and the local lad who came home after turning down the likes of Man Utd. Unfortunately we never won the Premiership, although him and Keegan brought us close and gave us hope for a while! But considering the doom and gloom around our club, that’s reminded me of a Keegan quote I spotted the other day from when he left as manager when Mike Ashley took over “Don’t ever give up on your club, keep supporting it, it’s your club and trust me, one day you will get your club back and it will be everything you wanted it to be, Newcastle United is bigger than anyone. It hurts I know, but just keep going, he is only one man, we are a city, a whole population. Trust me.” That really does sum up the Geordie mind set of us being a ‘nation’ almost (laughs). Maybe there’s hope for us one day. Just can’t see us winning anything at all at the minute! 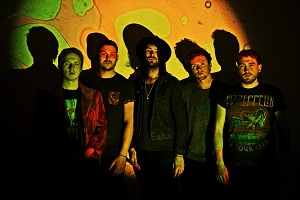 Who are your musical influences? There’s definitely some Doors in there isn’t there?
Alex – We do get that one a lot, it’s strange as none of us are huge Doors fans but I can see where people are coming from. Jim Morrison keeps rearing his but I know Dom is more influenced by anyone from Al Jolson and his passionate singing style to Nas and the darker tones/lyrics of guys like Mark Lanegan.

Alex – Musically we all listen to a lot of different things, but I think we can agree we’re all influenced by Black Sabbath, The Stooges and Queens Of The Stone Age in our heavier moments, and for me personally guitar-wise I’d also say Black Rebel Motorcycle Club and the vibes of bands like The Black Angels.

Which artists excite you at the moment?
Alex – I think Royal Blood taking off and kicking up a bit of a fuss can only be a good think for rock music in this country in general, I’m really into them at the moment. The Wytches are another great new band with a really dark sound, same with The Amazing Snakeheads.

Dom has a clothing label The Greensleeve and designs your artwork, does he have you dressing up in his creations and parading the catwalk?

Dom – It’s more of a general design label to be honest, the fashion aspect is secondary to the art itself. It just so happens that some of the artwork will be free to wander its way onto a cotton canvas while some of the other LP sleeve designs will remain caged and in location.

You’ve been gaining recognition lately with plays from BBC Radio Newcastle and Amazing Radio to name two. Where do you see the group going over the next six months?
Alex – Hopefully some national radio play, but not really sure where I can see us going – it’s not like we have a long term vision or any kind of plan. We do seem to be getting a bit more attention with each release, and more importantly getting better as a band all the time, both live and on record. I think as long as we’re seeing that progress, we’re not too fussed about where we’re headed, as long as it’s not backwards!

Twitter or Facebook?
Alex – I’d say Facebook, it seems a bit more personal. Only just though. Twitter to me is like a bombardment of information, if you blink you’ve missed it – I find it hard to make sense of what’s actually going on there! We use Twitter for the band but I’m generally not a fan, it seems to me like people just use it see who Liam Gallagher or Joey Barton are slagging off on any given day.

How was it supporting Superfood and Temples?
Alex – Both of those gigs went well, they were both really down to earth guys as well and we had a decent chat on with them, Temples in particular. It was good even to just get a brief insight into what being a signed, touring band is like, or even just chatting shit comparing our fuzz pedals and our Gretsch guitars!

Dom – They were as good any other gigs we’ve played, I just think we prefer to be the main event though.

Do bands need record labels anymore?
Alex – Well we’ve self-funded and self-released everything we’ve done so far, so seemingly not! Although I’m sure a record label would help give you that breakthrough push. And we wouldn’t mind having a bit more money to throw at things like a music video or getting a mini tour together! I think bands are becoming less reliant on labels, but I’m sure they still have their place.

I’m coming for a meal, what are you making?
Dom – I’m making a mess in the kitchen and a burnt quiche.

Lead track, Siam from the new EP has some pretty risqué lyrics. I take it you’re not expecting much airplay? Which other track should radio stations be playing?
Alex – I suppose it does, but at least there’s no swearing so we should be fine! I would say Repetition is the catchiest one on there, that’s had a few plays on BBC Radio Newcastle’s Introducing show already, so hopefully there’ll be more to come on other stations. It’s just good to know it’s blasting out somewhere in someone’s car or a café maybe, to people who wouldn’t normally be exposed to our tunes.

You played at the Stockton Weekender in July. How was it for you? Any hob-knobbing with Shaun Ryder, Peter Hook or Martha Reeves?
Alex – Nah unfortunately not, we’re not really ones for mingling with the stars (laughs). Too busy just chilling out and enjoying ourselves after our set I suppose! But yeah it was great being involved in a festival like that, it’s great to see plenty of local acts from around the region mixed up with some big headliners.

What are your plans for the remainder of the year?
Alex – Just getting this new EP out really for the moment, we just like to take things one step at a time, there’s never any real master plan with Kobadelta! We’re just happy as long as we can see that we’re writing better tunes every time, playing bigger and better gigs, getting ourselves heard and seeing that people are enjoying it, which thankfully seems to be happening at the minute!