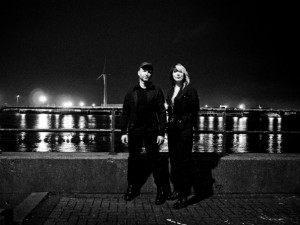 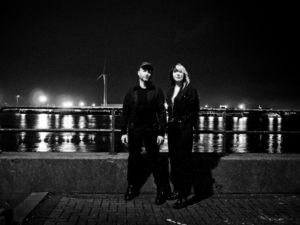 Post-punk, electro disco duo Feral Five are about to release their new single 3D amidst a hurricane of media interest. Since Louder Than War praised their debut single, Skin, they’ve gone from strength to strength and are finally getting onto mainstream playlists.

Our man (and fan) Paul Scott-Bates had a chat with Kat and Drew Five.

Louder Than War: Why Feral Five?

Kat: Because we’re a snarling space gang. Of two. Or as Steve Lamacq put it “Enid Blyton’s worst nightmare”.

It seems to have been a great 18 months for you. Louder Than War loved Skin and debuted the video for Strung Out, and 3D has received lots of publicity. Has is surpassed all expectations?

We’ve had a crazy 18 months, and have been overwhelmed by all the support – from Louder Than War, recently from BBC6 Music, and the US tech press calling our new track “3D” an anthem. As a DIY band that early support from Louder Than War, Hiapop Blog and other bloggers and DJs was just brilliant and we got played across the world.

Drew: Crowdsourcing the Skin video clips through Vine was a blast, and it was great that LTW showcased Strung Out.

You seem to like your science-fiction and science fact…

Kat: As probing time and space explorers our mission is to look into the future. There’s more to music than love songs, though we have a few of those as well.

Drew: 3D is essentially all about printing 3D human beings from a 3D printer. Sounds like science fiction but prosthetics and even vertebrae are being printed now. We’re imagining a future where whole people will be scanned and reprinted, not cloned – printed. The immediacy of being able to produce humans to order, on ubiquitous printing tech is what the song is about and who is at the controls. The ethics of it all.

Despite our dystopian lyrics we do have hope for humanity; you could say we create cautionary tales. The best science fiction explores stories relevant to the human condition. So, yeah, we like ethical science and smart science fiction.

Kat: And we pay respects to the sometimes overlooked greats, like Rosalind Franklin.

What do you think of Peter Capaldi as Dr Who?

Drew: Capaldi’s a great actor for sure and Doctor Who is such an iconic figure. “Modern art!” was his first ever line in Doctor Who when he played the Roman Caecilius in a David Tennant episode. A few people may have Malcolm Tucker in their minds every time they watch him: “we’ve f@cking, time travelled”. No diss to Peter and we wish him well, but we’d love to see a spin-off of what went down with the John Hurt Doctor.

Kat: And we want to remix the Dr Who theme, and the pictures. Don’t dig that new title sequence at all. 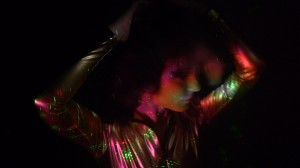 Your musical tastes are very varied. Does that make you more feral?

Kat: For sure. We have our own in-band soundclashes and nothing is out of bounds. Disco and distortion pedals? Bring it on. That’s our sound.

Drew: Our musical tastes are certainly where some of the wild things are! But we are quite house trained! The best thing about some of the artists we love is that they’re open to exploring music. For us making and playing music is about having the courage to get out into the wild, survive the experience and then report back, artistically, let you know what we found out in a sometimes arty, sometimes noisy way.

Drew: Antisocial media? We like meeting real people but sometimes social media allows conversations to be had that wouldn’t otherwise happen. So yeah, Twitter, definitely.

Kat: We’ve made so many friends, got radio play, met video directors and more.

You’ve spent quite some time in the USA lately. Business or pleasure?

Drew: Sort of business. We’re involved with a few things outside the band but still connected to art, music and technology.

You donated Skin to the Ralph’s Life charity CD for mental illness and performed at the launch gig in Camden. How did you find the experience?

Ralph is a brilliant blogger and we owe him a big sack of bones. It was a privilege to be asked to donate a track to the CD especially because we really dig Re:Think and totally support what the Ralph’s Life project is about. A Twitter community built up around the crowd funding campaign, the launch gig was full of great acts, real fun to play, and Clem Burke (Blondie’s drummer) came down to check it out. Buy the CD people – 40 ace indie tracks.

Who’s the most famous person in your phonebook?

Drew: As Nick Drake sang: “fame is but a fruit tree…” you know the rest.

Kat: We’ve been really fortunate to get to know people who have inspired us like Keith Levene, so he’s probably up there. But Drew knows the guy that taught Albert Lee to play guitar!

Skin was remixed in several versions by The Woodentops’ Rolo McGinty who then went on to release possibly their finest album.

How did you meet him and what was he like to work with?

Kat: Rolo’s ace to work with, and so creative. Just when we thought he’d made the perfect remix, he’d come up with another one. The Woodentops’ ace keyboard player Aine O’Keeffe used to play with me in a garage punk grrrl band and Rolo’s been a great support from our early days. We were dead chuffed to support them at Dingwalls, and then see them on such top form at their album launch.

Drew: We’ll remix a gourmet platter for you. How does that sound?

Kat: And there’ll be overproof Bounty rum from Fiji to wash it down with.

Are there any new artists that excite you?

Kat: How long have you got? There are a lot of emerging artists that we’re really into. Drew’s got a thing for the music of Haiku Salut who he saw at the Green Man last year. He’s also into Icelandic stuff like Tilbury and we think Daniel Avery has done some cool stuff recently. We’re totally into Deux Furieuses who are noisy and exciting, also Saint Agnes, She Makes War, The Hysterical Injury, Dana Jade, The Pearl Harts. Wrangler are amazing, they’re emerging but have history. Hello Cabaret Voltaire Mal! Slaves probably count as emerged, but are brilliant live, along with Fat White Family. We just need someone to let us programme our own new blood festival.

You’re quite in demand as remixers in your own right. Whose tracks would you like to get your hands on?

Kylie without a doubt. (laughs). But we’d love to remix some Tilbury or bring some Feralness to Ellen Alien’s EDM stuff. And Savages. 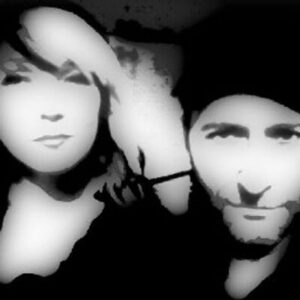 It hasn’t gone unnoticed that you’re big supporters of little bloggers, do they really have a part to play?

Absolutely. The brilliant thing is they keep it real. There’s no vested interest. Passionate and committed, they judge you on your tunes – it doesn’t get better than that. We support people who have an authentic voice and use it. That’s what we’re about.

You’ll be launching the vinyl version of the new single at a 3D printing party on London on 17th September. What’s that all about?

We’re DJ-ing and 3D printing at a party at the East London Design Store, that celebrates London Design Festival. Really looking forward to that, especially as we are fusing art and music in the release – we’ve been working with tribal pop artist Camille Walala.

Are there any plans to take the Feral Five sound on tour?

Kat: We got ourselves out of the studio to road test our songs pretty early on thanks to Red Vomit!, and get blooded in Feral live-ness.

Drew: It was a great proving ground and we definitely have enough material for two albums, but we haven’t quite completed our first yet. So recording’s the priority. We haven’t quite got the backing to fund a big tour right now but we’ve got a few things coming up. Keep listening. We’ll definitely let you know.

What does the rest of the year hold and where will you be spending Xmas?

We’re going to be busy writing new material and doing a handful of events. We’re on a couple of interesting compilation CDs that are coming out. All hail the compilation we say. As for Xmas Day, we’ll probably be playing warped carols on some new tech that came in our stocking, huddling around an open fire roasting something, and listening to Nat King Cole in our Feral onesies. Kat wants to write a ‘broken spirit of Xmas’ tune. We’ll see.