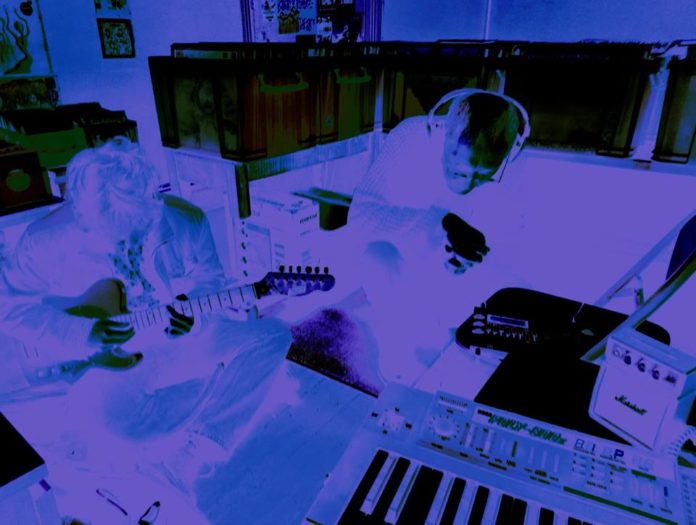 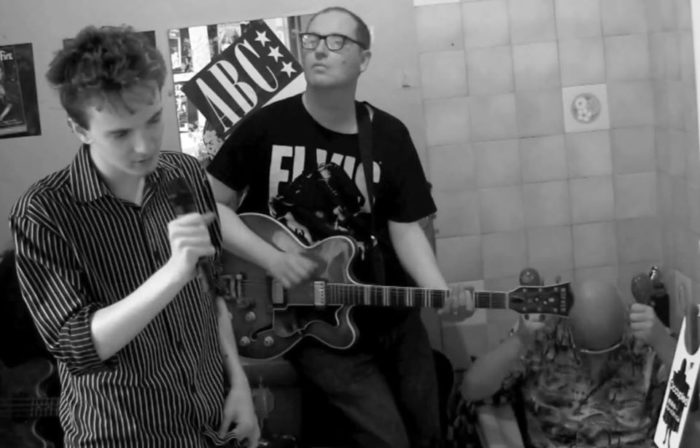 As part of alternative/psychedelic folk/lo-fi band The Bordellos, Brian Shea (aka Brian Bordello) has been releasing music for almost a quarter of a century. As he releases his debut album, Oasis Are The Enemy under the name of Idiot Blur Fanboy, Paul Scott-Bates has a chat about Morrissey, 80s pop and music blogs.

For those unfamiliar with the sound of The Bordellos, give us a brief introduction.

The Bordellos are a three piece band (at the moment from St Helens in Merseyside who have been together in one form or another for twenty three years and, apart from the first two albums have been mostly making lo-fi music recording it on anything from old ghetto blasters and mp3 players up to digital 8 tracks. Making more enemies than friends, poking fun at both the ridiculousness of life and the ridiculousness of the music industry and lots of the people in it but also dealing with my deep love and belief in the magical power of music.

Why the solo album under the alias?

It was not actually meant to be a solo album, it was going to be myself recording tracks with various other people, on the first four tracks my son Dan, member of many bands (The Bordellos, Vukovar, and Beauty Stab), plays various instruments and does harmony vocals. Being a hermit and impatient like character I could not face meeting up and having to deal with other people so ended up recording them myself but, I intend to put an Idiot Blur Fanboy band together ,maybe for the next album and even play some gigs. The name came about after I wrote a piece in my blog taking the piss out of the Oasis album Be Hear Now and in truth Oasis themselves who are one of the most turgid leaden dull bland bands to ever grace (if grace is the right word) the worlds musical stage. Anyway, as you can imagine the piece did not go down well with Oasis fans and one of the many online so called insults was Idiot Blur Fanboy actually it was Retarded Blur fanboy but I changed the ‘retarded’ to idiot so not to cause offence.

Summarise the album in ten words.

Was the intention to shock, wind people up or just express your feelings?

I never intend to shock or wind people up would you believe. It just must be a natural talent or trait in my character that gets peoples back up. I just express my feelings and points of view and let’s be honest it is not hard to annoy or upset people in this day and age.

You’ve been described as anti-music and even no-fi. Are these fair? Do you care?

I would say I do not quite get the anti-music one as most of my songs are very musical just recorded in a very basic way and I am anything but anti-music. The no-fi one I get especially for my solo stuff and the Idiot Blur Fanboy album but, to be honest I do not really care as long as people are calling it something. 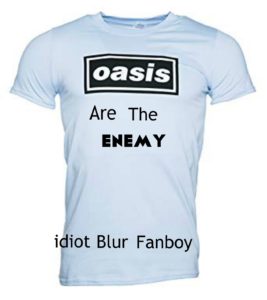 Your lyrics are often autobiographical or about true life events and memories, is there anything you wouldn’t write about?

I honestly don’t think there is anything I would not write about as half the time I write in such a way people do not have a clue what I am wittering on about.

Listening to Oasis Are The Enemy you clearly have fond memories of 80s pop some of which went sour as the album closer Oh Morrissey shows.

I loved the 80s, they were my teenage years and the music from that time soundtracked so many wonderful times how could you not love a decade when there where bands like The Fall and orange Juice, The Smiths, The Go-Betweens all that great post punk music and indie music.

What would be your favourite and least favourite songs from that era?

10 songs I especially love from the 80s in no particular order are Crazy Farmyard Animal – Julian Cope, Simply Thrilled Honey – Orange Juice, This Charming Man – The Smiths, Cruisers Creek – The Fall, Stray Cat Strut – The Stray Cats, Don’t Bury Me Yet – The Raw Herbs, Sunday To Saturday – The June Brides, Dive For Your Memory – The Go-Betweens, I Hope Your Happy Now – Elvis Costello and The Attractions and, Oblivious – Aztec Camera.

It really is a shame that Morrissey has turned out to be so disappointing in so many ways, he has gone from the clown prince of 80s alternative pop to the pantomime dame of the far right, the worse his records get the more he feels the need to spread his bitterness and self-pity another few bad albums and he will be sporting a Hitler Moustache and bad comb over.

Many of your tracks are very simplistic affairs, the occasional dud note or vocal stutter. You clearly feel the need to capture those moments?

I learnt long ago my first take is always the best, so I have embraced that mostly and just do it once if that means some stuttered over lyric or in a lot of cases wrong lyric or bum note or missed guitar chord, so be it. I am a man of little patience with recording and the first to admit a nightmare to be in a band with and, more than a nightmare to any poor producer which is one of the reasons I mostly do it myself these days.

Are there any current bands or artists that you particularly admire and why?

There are so many and so much great new music being made I am lucky enough to have my own new release round up section in the wonderful Monolith Cocktail blog and get sent so much stuff that otherwise I may not get to hear about, as let’s be honest there are getting less and less places to read or hear about new music today. Blogs seem to be dropping like flies and the ones that have survived prefer to write about albums that were released ten, fifteen, twenty, twenty-five, thirty years ago, it for some reason likes to go up in fives.

BBC6 Music has just become dull and generic especially in the daytime you are more likely to hear a song from thirty years ago than a song from a new and up and coming band or a new release but, there are some great artists out there, Bigflower, who are from Liverpool and formed by Ivor Perry from Easterhouse fame has been releasing some fine free to download singles on their Bandcamp page, dark intense but beautiful songs that really should be getting more attention from the blogs and radio.

Toxic Chicken, who also has released an album on Wormhole World records is making attractive fun experimental music and has just released a 15 minute live mini album which is truly bewitching which again is available on Bandcamp page. Beauty Stab could be the saviours of pop music today they could make it dangerous dark and sleazy, they are young good lucking great songwriters and with Dan probably have the finest vocalist in new music today without sounding like Louie Walsh he actually is like a young Scott Walker. They have only released the one single so far the stunning O Eden on Metal Postcard Records everyone should check it out and especially blog writers and radio programmers because they really are that good.

Bloom De Wilde who has released again some stunning pop singles over the past year or so, a beautiful and strange beguiling quirky artist who along with Beauty Stab could bring young people back into music and forget about their smartphones, what’s smart about them I will never know. Occult Character who writes sharp and very funny songs about life in America today seems to release a new single or album on a weekly basis, I call him the modern day Woody Guthrie. There really are so many great artists and new music today land loads of fine labels like Small Bear Records, Wormhole World and Metal Postcard Records who do not have the financial clout to compete today but survive by the excellence of the music and word of mouth recommendations. 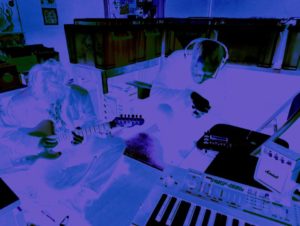 What are your hopes for the album and will there be more from Idiot Blur Fanboy?

I really hope that the album does well and for people to discover and enjoy the album. I am really happy with it and think it deserves a chance to get heard. If people can get over the lo-finess of it and they love good songs they should enjoy it. I would love it to inspire other bands artists to try out the lo-fi method of recording and try something a bit different. I know I am not going to get much radio play as radio programmers on the whole like their punk rock recorded in big shiny studios, but if they give it a chance they may discover that their listeners enjoy it.

I have already started to write the songs for the second Idiot Blur Fanboy albums this one may be called Britpop Shenanigans and will feature the song Oasis Are The Enemy which will explain why they are the enemy and why they put alternative guitar music back years. I always liked how Julian Cope’s song World Shut Your Mouth was never on the World Shut Your Mouth album but on the Saint Julian album so that influenced the decision to not having the song on Oasis Are The Enemy. I am planning to get more musicians involved and am open to offers of radio sessions and suchlike if anyone is interested. There will be much more from Idiot Blur Fanboy do not worry. Or do!

Oasis Are The Enemy is available via Wormhole World here.

More from The Bordellos on Bandcamp here. They can be followed on Twitter as @thebordellos and Liked on Facebook.