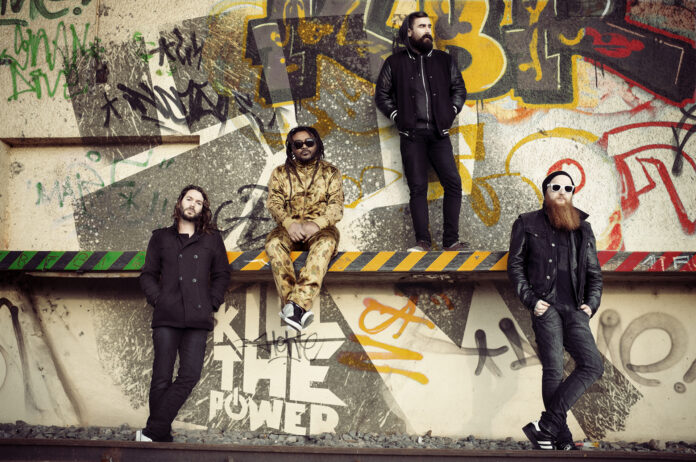 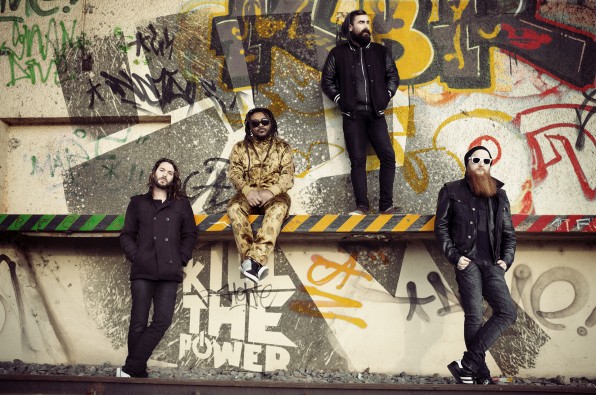 Renowned for their myriad genre-mashing and energetic live shows, Skindred have been one of the most consistent faces of the British alternative scene for over a decade. Louder Than War’s Sophie Sparham caught up with bassist and founding member Dan Pugsley for a few words.

Skindred have just kicked off their world tour in the UK and Louder Than War popped down to have a chat with their bassist, Dan Pugsley. Prepare to travel in to his touring mindset to find out the origins of ‘Kill the Power’,  the DIY makings of Ninja and why Dan believes this is the best album and live show they’ve ever done.

Dan Pugsley: It’s been really good, we’re only a few days in, but just the whole vibe of playing the new songs and the response has been great. And we’ve been trying some new stuff in the set, it’s been awesome.

What new stuff have you been trying out?

The new songs, but also part of our live show, we’ve always wanted it to be like a reggae sound system. So you don’t really know what’s going to happen, songs will stop and start or do something else, so there’s a couple like that in the set that have really come into their own , it’s really fun. I think this is the best set we’ve ever put together.

You guys have done so many tours, how does this compare?

It’s the beginning of a cycle again. We finished recording the album in April so since then we’ve been doing festivals and I went to India so we’re finding our feet again.  It’s been really good, I feel like for us it’s been a slow climb, but we’ve never gotten smaller, we’ve always gotten bigger.

Did you ever have a moment when you released that you made it as a band?

Genuinely, I was thinking the other night. It’s always felt pretty good to me. Even when we were playing tiny little places, it was still really cool. I’ve never gone, ‘have we made it?’ We’re just still doing it!

What was the inspiration behind ‘Kill the Power’?

People started asking if it was a political statement, but it’s not really, it’s more personal than that. It’s just the idea that if you have something in your life, be it a relationship, an addiction or it could be the government, then you have to do something about it. Phonetically, there’s a lot of stuff on that album, it’s not just one noted. We started writing and we decided we were going to concentrate on really, really honing the songs. So, I feel like this is the best record we’ve ever done . You always hope that when you make a new record, but I’ve never said it out loud before.

We’ve covered everything that we’re about. We’ve kinda gone back to more Babylon dance hall sounding stuff, but then we’ve used sonically, Union Black stuff.  Also, we’ve developed this side of the band which is more song-writing based. I think a lot of the time we’ve been about a sound, as I think that’s what attracts people. You know, Benji’s voice against hard guitars and rhymes; where as we wanted to have a song that people love. So I think we’ve got the songs down.

You’ve not brought out an album for a little while, have you been working on this for long?

Bits and pieces. There’s some stuff on that record that was from the end of Union Black that was just left on my computer. We did write a lot of songs and then condense them down. We’ve been working on this pretty much since the last album.

And I read somewhere that you guys said this record sounds rawer?

The idea is, a lot of the time when you hear a record that it’s so produced, especially in metal. So we were like with the edits, let’s just take it easy with the post production. Pretty much all the song I play from start to finish when we recorded them and everyone tried to do that.

That cool though and I think it keeps that human element.

Yeah and it’s more musical. So much music you hear now it like maths. I really love electronic music, so I programmed a lot of stuff and those have to be more rigid. But this time rather than sequencing it, I played a bunch of keyboards live.

I don’t think it’ll ever be a single, but my favourite track is ‘Worlds on Fire’ because to me, it’s totally what we’re about. It’s the idea of the band at the beginning and the fact that we’re still making that music. It’s fun and it’s fun to play live as we’re playing it to people cold.

It must be daunting playing new music to fans.

It’s cool though when you get to the point in the tour when the album’s come out and people start to really know the record.

And you collaborated with Russ Ballard?

Yeah, there’s a few things on the album. With Russ, we’d written the music and he got in almost on a vocal production kinda thing and coached Benji a bit. It was a really interesting thing to watch because I think Benji is incredible. We try and coach him sometimes but when you’re in something it’s difficult to look at him from an outsider’s perspective. So Russ came in to listen and he’s like this legend! He did some co-writes on the album as well and that was really cool.

We were also talking about getting a female vocalist in and Jenna G is on this drum and bass label that I really like called Hospital Records and had also worked with a mutual friend, Zed Bias, who did a few remixes for us on the last record. She just makes the songs that she’s in.

We’ve also got Author Brown, who did the intro of Ninja. Also, I’m not sure if it’s on the U.K version, but there’s a song called ‘Re-education’, it’s featuring a guy from a Japanese band called Sin. They do reggae and rock as well and we were the first band they heard and made them want to do that. But stylishly they are very different to us.

Going back to Ninja, it was a very humorous video to watch.

It wasn’t really like a proper video, because the label wanted to do a lyric video and Dan, who tours with us and does the electronics, is a really talented photographer and is really getting into his editing at the moment so asked if he could have a go at doing it. So he made the video. He went round Benji’s house and filmed him in front of a sheet or something and then edited it and animated it!

We’d done so much on the album, however still wanted people to know that we were still the same band and there was that humorous side to us.  I think that song is a bit of a red herring as to what the album is. There is definitely a part of the album that’s like that, but the rest has developed a lot further.

And you’ve toured with so many bands, but who’s your favourite?

I really like touring with the bands that aren’t stereotypically metal, because we’re a weird band, we could go out with some like Disturbed to Reel Big Fish. We did a few tours with Go Go Bordello and I love watching those guys, so they’re probably my favourite.

Are there any side projects that working?

We’re always working on stuff. There’s a couple of collaboration that are on the cards for Skindred, but I can’t talk about them at the moment.