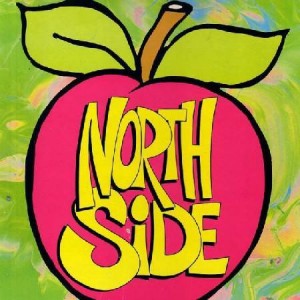 As we reported back in November Manchester band Northside have reformed. In this feature one of their biggest fans, Jason Wynne, tells us why they mean so much to him. Also included are upcoming live dates (at foot of page).

Which side? This side? That side? No. Northside. Coming from the North side of the Republic of Mancunia, Blackley and Moston’s finest return to the fold 25 years, yes 25 years, after starting out on a sometimes rocky but always colourful trip that spawned the iconic Chicken Rhythms album of 1991 (Factory Records) – not to mention the theme tune to the Granada Soccer Night football show illuminating memories of Elton Welsby’s dodgy barnets and even dodgier defensive performances by my beloved Burnley FC in such salubrious surroundings as Lincoln, Scarborough and Rochdale.

The massively underrated Madchester ragamuffins started out as Manchester firmly became the capital of music. Their Northern baggy groove offering funky, danceable ‘choons’ tinged with punk, reggae and psychedelia. The original ‘mad for it’ band in my eyes and ears. With ‘bass geeetar’ (Cliff Ogier), soaring, choppy guitars – wah-wah aplenty (Mike Upton, later replaced by Timmy Walsh), catchy drumbeats (Paul Walsh) and the infectious Warren ‘Dermo’ Dermody on vocals, Northside were well and truly ‘in the area’ with their indie / dance crossover appealing to the masses over a few hazy summers.

To this day, they are part of my musical prized possessions on vinyl, cd and cassette – yes cassette. Albums, singles, bootlegs, the lot – all in the name of Northside. An album cassette that survived when some scally decided to break into my L-reg Ford Fiesta all those years ago taking only my Carter USM and Birdland tapes. You were welcome to them mate but thanks for leaving me that masterpiece. Your loss, not mine.

For those of a Madchester / baggy persuasion the return of Northside to the stage will invoke memories of times gone by. Their hardcore support will no doubt be in reflective mood on the good, and bad, times of the past quarter of a century as they prepare for these reunion gigs. Some friends are still here, some are gone. Be it by fall out, be it by circumstance, be it by emigration, be it by death. We all had the questions but nobody had the answers. “Answers Come In Dreams” was Dermo’s rally cry.

Some say “if you remember the 90s, then you weren’t really there” but who could forget the early Northside days of the Boardwalk, Free Trade Hall (with the Mondays), Hacienda and the Academy gigs et al? What about the LSD reference in Shall We take A Trip that got the single ludicrously banned from air play? Music for the people.

Coming from a music shy town in deepest darkest North Wales our only escape at the weekend’s was the trip out to moody places like Manchester, Liverpool, Leeds or London for the ‘big gigs’, although I tended to steer clear of driving South as I hated all things London … still do actually. I’m Northern you see. “It’s not where yer from, it’s where yer at”. And the North West was where it was, and still is, at.

Admittedly I couldn’t get to all Northside gigs at the time (money was tight, getting some cash together for University, constant travelling etc) but celebrating my 19th (and 1 day) birthday at the PSV Club on 8th October 1990 was a particular highlight. I remember drinking in some not so friendly dodgy boozers throughout the day, meeting some fantastic Northside-mad fans – great people, as all Northside fans were / still are and experiencing one of the greatest gigs ever. The atmosphere buzzing, losing yourself in the music, the vibe 100% right. To top it off they decided to record the whole thing and yes I still have the VHS video cassette. Yes VHS – thank God it wasn’t Betamax.

It was only years later and a chance discussion with Dermo that I realised we both share the same birthday. Brothers, of a fashion. (Probably explains why when I saw Dermo on a Thursday night on Top of the Pops wearing an orange jumper I then proceeded to purchase said orange top from Afflecks Palace on the Saturday when we North Walian boys did our regular weekend shopping trip to Manchester to get ahead of the fashion). Ridiculed by some locals back in the sheltered backdrop of my hometown for daring to listen to something that wasn’t Duran Duran or Erasure!, I thought, and knew, that me and my muckers looked the part and appreciated good music, despite our ridiculous haircuts. Yeah man.

Imagine my surprise in the summer of 1991 then when some of those that had ridiculed me would appear at Elland Road, Leeds to witness Northside play the great all day event that was the Mondays, the Farm, Stereo MCs, La’s and the High. Finally getting on the trip and getting out of Wales for one day. They didn’t half stand out though. Bless ‘em. At least Northside and the rest had had an impact on the fortunate few and made people sit up and take notice. A positive effect on the youth of the day! A change was on it’s way.

Just as I thought Northside were going to crack it with the second album and a Tour de World the demise of Factory and some inner wranglings (allegedly) put an end to a band that were knocking on the door. Right place, wrong time. Who’s to Blame? Nobody knows the answers apart from the band. Now they’re back though. Knocking on the door of the music premiership league. They’ve got new songs and, of course, they’ve got the old classics too. Shall We Take A Trip, Take 5, My Rising Star….they still sound relevant today…as does the first album. A cult classic.

The rumours of new material and a new album are no longer rumours. It’s happening. Rehearsals are going great and we all know “Practise makes perfect” as Dermo once sang. A must see band back in the day and must see on their return. It’s nice to know Northside are back in the area.

Northside play the following dates on their UK tour:

All words by Jason Wynne. More writing by Jason can be found at his author’s archive.